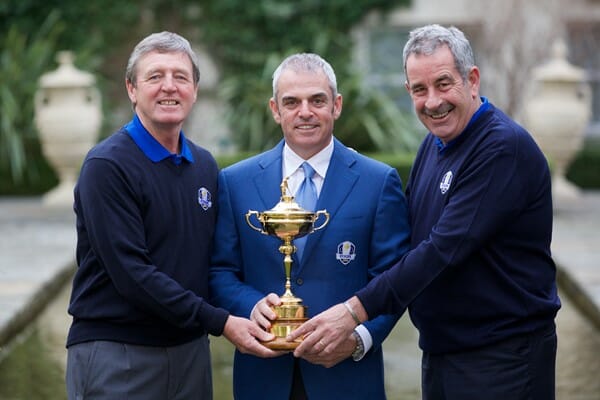 The five will be among 14 former Ryder Cup players who between them boast a remarkable 38 appearances and contest the event at the Forest of Arden.

In 2002, he became the second European captain to sink the winning putt and captain a winning team at separate Ryder Cups, after Seve Ballesteros, when he oversaw Europe’s 15 ½ – 12 ½ victory.

Joining Torrance on eight Ryder Cup appearances is Woosnam, the 1991 Masters Tournament champion. The Welshman represented Europe from 1983 to 1997, winning The Ryder Cup four times and retaining once.

He formed a formidable partnership with Sir Nick Faldo from 1987 to 1991, winning six points from ten matches together. Woosnam also partnered Baker in 1993, and the pair defeated Fred Couples and Paul Azinger 6&5 – one of the largest margins of victory in Europe’s history.

McGinley made his Ryder Cup debut in 2002, the first of three appearances, and sank the decisive putt at The Belfry. After winning the coveted trophy in all three outings as a player, he went on to captain Europe at The 2014 Ryder Cup at Gleneagles where Europe retained with a 16 ½ – 11 ½ victory.

And one of McGinley’s vice-captains was Smyth, a veteran of two Ryder Cups.

McGinley had his first Seniors start of 2017 at the WINSTONgolf Senior Open, and Sandelin made his first appearance on American soil at the KitchenAid Senior PGA Championship in May, going on to make his regular debut at the European Tour Properties Senior Classic.

Of the 14 players, Barry Lane is the most recent winner on the Senior Tour after his astonishing 22 under par total at the Willow Senior Golf Classic, at Hanbury Manor Marriott Hotel & Country Club.

And lets not forget the contribution Walton made in holing the winning putt in 1995 at Oak Hill while Rafferty made his only Ryder Cup showing in 1989.

Woods returns to Sherwood with no Christmas decorations or fans

The last time Tiger Woods teed-up at the Sherwood Hills club was Christmas time seven years ago when a record of nearly 25,000 spectators poured through the gates on the final day
Read more
Irish PGA News

Representing an assured step into the laser rangefinder market, PRO L1 combines advanced technology with sleek styling and a reliable construction from one of the game’s most trusted brands
Read more
Tour News

"They (administrators) should have been worried a long time ago but the genie is out of the bag now," said Woods. "It's now about what we are going to do going forward and how soon can they do it"
Read more