McGrane wins Order of Merit, but where’s the incentive?

Over twenty years after his first win, Damien McGrane has claimed the 2017 PGA in Ireland Order of Merit in resounding fashion as the curtain draws to a close on another remarkable year for the Kells man.

McGrane topped the ladder with an insurmountable 27,750 points, almost four thousand points clear of closest challenger, Waterville’s David Higgins.
The points are calculated based on a player’s best 20 events of the season and if you needed an indication of what’s needed to win, you only have to gloss over McGrane’s statistics. Of the 20 results taken into account, McGrane won 11 of times, was second 6 times and the other counting scores were third place finishes – he was virtually untouchable.

“I had a really good run in the middle of the season. The most satisfying thing for me was winning five events in a row at that time, it was a nice run. My golf was great around then and ultimately that was the difference as it put me a fair bit ahead of the chasing pack.”

With season long races and bonus cash the norm on most professional tours these days, the Irish Region have always had lucrative spots available for the Irish Open for the leading players on the regions Order of Merit. A decade ago it was the Top 10 which was cut to 6 spots in recent years.
As our national championship has evolved and grown, pressure has been heaped onto the European Tour from sponsors, management companies and players for more spots in the now €7million Rolex event.

Bowing to the pressure, the Tour removed all spots after the PGA agreed with the European Tour last month to abolish the traditional exempt places for the leading players on the Irish Region’s Order of Merit and instead introduce a 36-hole qualifier for next year’s Dubai Duty Free Irish Open that will be open to a select field.

“Unfortunately, the Irish region is now not the stepping stone it once was”, said McGrane.

“I am not disappointed personally. I was well rewarded in the past and used the opportunities that came with winning the Order of Merit to progress my career. Every stage of a player’s career has to be a stepping stone and you hope these take you forward in your career, the problem now with the Irish region is without the spots for the Irish Open it has removed this stepping stone.”

“It’s the younger lads I really feel sorry for. I class myself as lucky as I was part of the glory days of Irish golf on the PGA region where the best players were rewarded for a top finish in the Order of Merit with entry to the Irish Open or the European Open back in the late 90s and early 2000’s.” 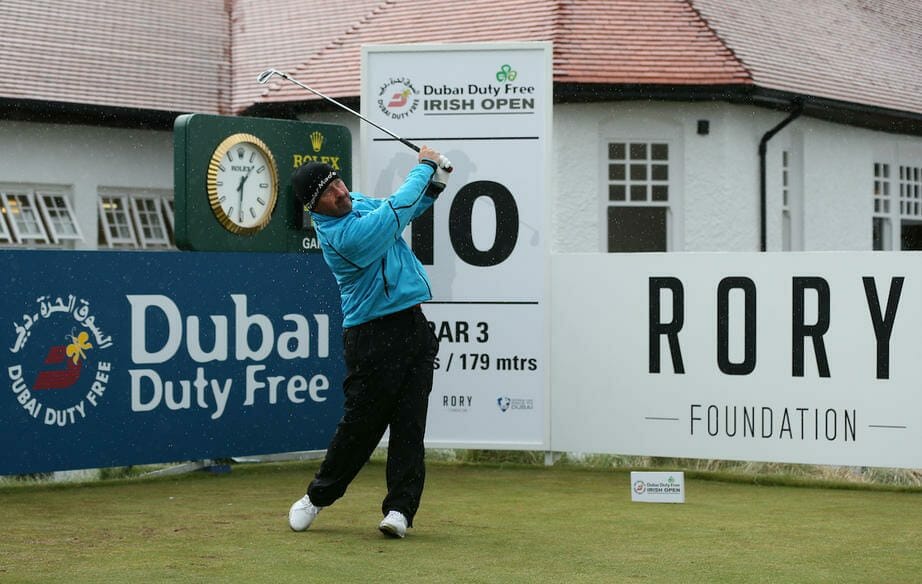 McGrane in action at the Irish Open in 2015. Image by Golffile.ie

McGrane was quick to point out how he used the region as a springboard to forge a successful career on the European Tour and fears removing this route will only make the gap wider for younger professionals.

“I won the Irish PGA Order of Merit in 1996 and that gave me huge confidence. I won it again in 1998 and again in 2000 and then progressed to the Challenge Tour and then won my main European Tour card which I held for over ten years. Those Order of Merit wins were huge for me progressing my career and these opportunities are now not available to the younger Irish PGA professionals, that’s what disappoints me the most looking forward.”

“I have played in every Irish Open since 1997 using my Order of Merit finish on the Irish region to get my breaks early in my career, that’s all gone now so young Irish players will no longer have the opportunity to progress their careers like I did.”
“The set up now means whether you finish top or fifth or tenth in the order of merit, it actually doesn’t matter, that’s disappointing.”

Off the back of their Order of Merit finishes, McGrane, Higgins and Simon Thornton, who finished in third place on the standings, have qualified for the PGA Playoffs in Walton Heath from October 30th to November 1st.

The 54-hole PGA Play-Offs feature the top 24 players from the regional order of merits in GB&I fighting it out for a prize fund of £25,000 and an added incentive with four spots for the BMW PGA Championship up for grabs, while two places are also available for the British Masters in 2018.

Three PGA Play-Off spots seem little reward for a long season of work for our top PGA Professionals. With less opportunity to progress, McGrane points to the fact that the gap just keeps getting wider.

“I won my first Irish region Order of Merit in 1996 and twenty years later I find myself top of the pile again. I think that’s wrong, I should be struggling to keep up with the younger lads on the Irish region. This would not happen in any other sport and just highlights the problems that already exist in the region. Look at the Irish region order of merit ten or fifteen years ago, the same names still feature up the top. Where are the younger generation? In my opinion, with no opportunity for Irish PGA professionals to progress from a good season in Ireland, this gulf will just get wider.”

The debate rumbles on about access to the Irish Open for Irish players. On one hand it’s great to see a qualifier set up to allow players a chance to play their way into the Irish Open, but with the GUI losing 3 spots and the PGA in Ireland region losing 6, where will the next generation of Irish players get their chance to progress on the big stage? The Irish Open is fast becoming a closed shop, it seems no Irish need apply.

As for the PGA in Ireland’s Order of Merit, i don’t believe there is even a trophy to mark the achievement.