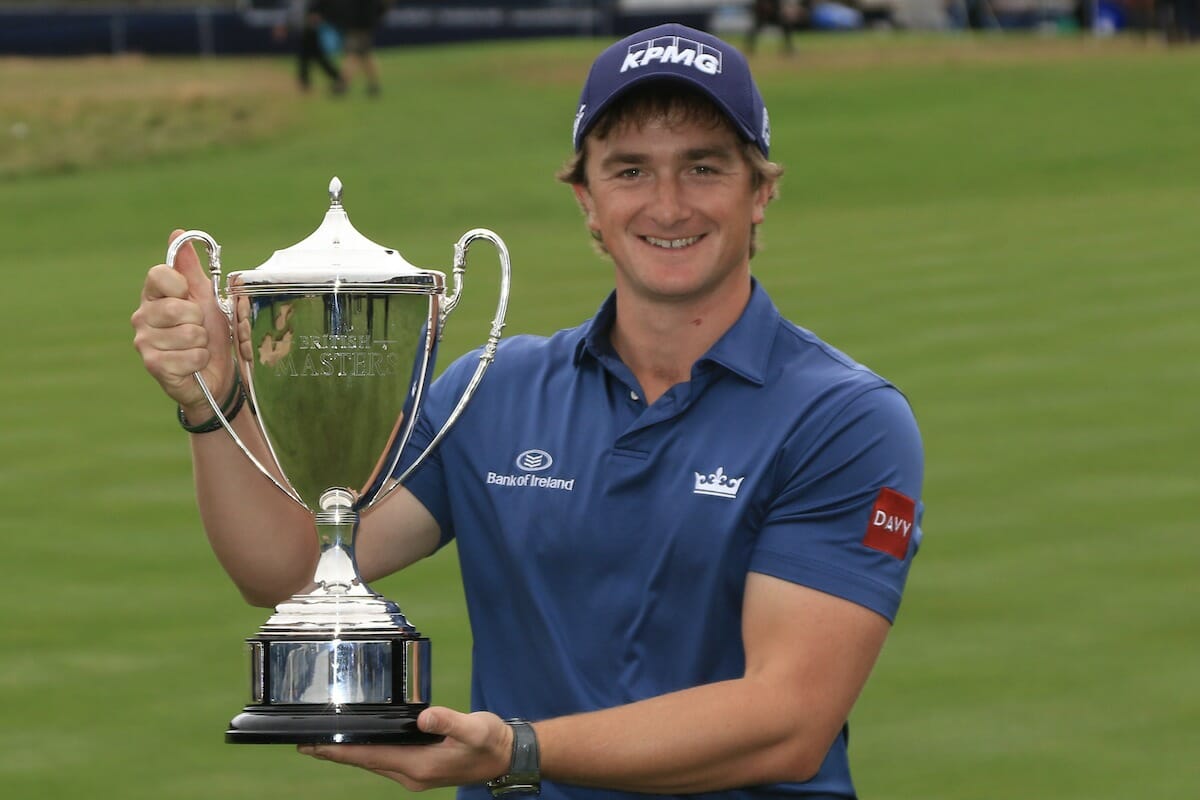 Dunne, 24 ignited his round with three birdies and an eagle in opening six holes ahead of a sizzling nine-under 61 for a 20-under par tally.
McIlroy had moved to within a shot of Dunne in shooting a last day 63 for a 17-under total but with Dunne superbly holding his nerve and answering McIlroy’s challenge with birdies over his closing two holes including sensationally chipping-in from well off the green at the last.

Dunne’s maiden success earned the quitely-spoken Greystones golfer a cool €566,800 and taken his earning this year through the Euro 1m barrier for a first time in his career with winnings of €1, 296,408 and moving to 12th on the Race to Dubai.
Dunne’s win also is the sixth Irish-born British Masters win and the first since the late, great Christy O’Connor Jnr. captured the 1992 title.

Dunne’s success came in his 51st Tour event and also a 51st Irish victory in the history of the European Tour, helped make amends earlier this year in losing a play-off for the Hassan 11 Trophy in Morocco.
“It feels great to finally win as I have been up there a few times this year but have never really got to put the foot down on Sunday,” said Dunne.
“Waking up this morning I said to myself I am going to try and win it rather than have someone else hand it to me and thankfully I did it, and hopefully I can do it again.
“Also what happened in Morocco was a help as I had a couple of shots lead late in my final round then but Edoardo (Molinari) finished birdie, eagle so I was just waiting today for someone like McIlroy to have a hole-in-one on the last or something like that.”

“So after coming so close before it is nice to get rid of any demons off my back to get my first victory and hopefully build from here.”
First to congratulate Dunne was fellow Irishman and caddy, Darren Reynolds and just seconds ahead of Shane Lowry greeting Dunne with a huge bear hug and then being met by tournament host, Lee Westwood who shared 15th place. 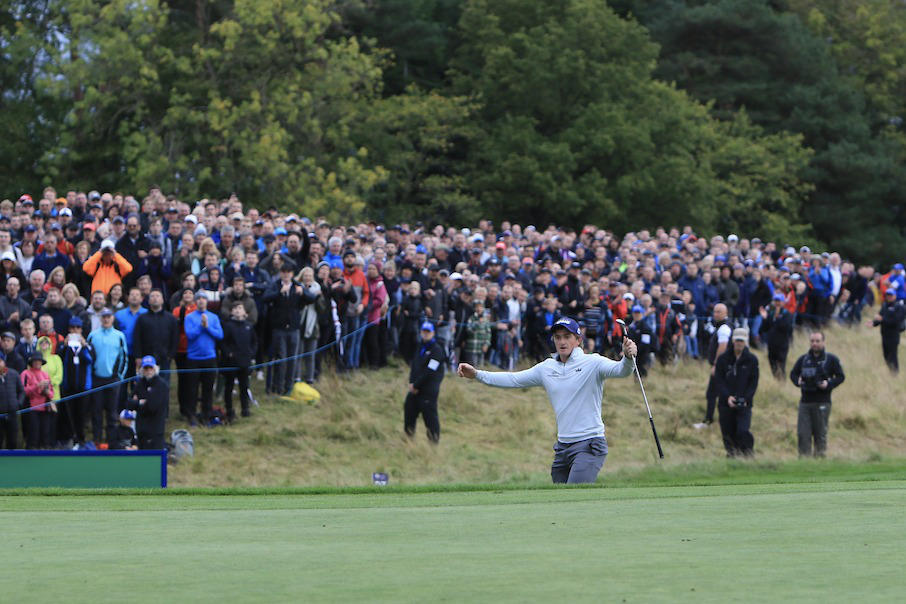 Dunne holing out on 18. Image by Thos Caffrey Golffile.ie

McIlroy birdied three holes in succession over his opening nine but after dropping a shot at 11 the World No. 6 put began to put  real pressure on Dunne with a further three birdies in a row from the 12th along with birdies at 16 and 17.
“It was a good weekend and just nice to have a chance to win a golf tournament as that was big thing and the more chances I have like that I seem to play better,” Said McIlroy being handed a cheque for €374,996 and move to sixth on the Race to Dubai.
“Mentally, I was just a little more engaged and switched on.

“I started okay today and a little more slower than Saturday to be three-under through nine but then Paul got off to a great start.
“But I set myself a target on the back nine to shoot four-under and finish 17-under I feel like I have a chance, so I did everything I wanted to do and it was just not good enough in the end”,
And while securing his best finish since capturing last year’s PGA Tour Championship McIlroy was full of praise for Dunne, and in an event McIlroy had turned pro a decade ago.
“It was unbelievable for Paul to shoot a 61 to win his first tournament and was incredibly impressive, and I am very happy for him as he has worked hard on his game,” said McIlroy.
“Every time I am on the range or the practice putting green Pauls always also seems to be there and he is always working very, so I am very happy for him today”.

McIlroy now now heads north to Scotland and Thursday’s starting Alfred Dunhill Links Championship still looking for a first win of 2017 and in his last event of the year. “I am looking forward to the Dunhill and I my dad rang me a couple of days ago saying ‘it is good you have got your game in shape’ which was great”, said McIlroy smiling.
“We always have a great time up there in Scotland and I hear the weather is not too bad, so I am really looking forward at giving it another shot in trying to win a tournament this year”.

However, McIlroy will not want reminding that of his 22 pro victories around the globe he is yet to taste success in the Home of Golf nation.
Sweden’s Robert Karlsson, who had led by a shot heading to the final day, posted a 66 for third place at 16-under par.
Lowry pocketed €101,250 for his effort and in a last day round that started with a fifth hole bogey but then four birdies in his 67 for a 13-under tally.
“It was good but then I didn’t get anything going on the front nine, and finished nicely,” said Lowry.
“So, a nice top-10 is a bit of a reward for some good golf this week. I feel like I played really well, and I’m looking forward to the Dunhill next week. I’m very excited going up there, three courses that I love, and I feel like my game is in good shape”.
And like McIlroy, Lowry was delighted for Dunne.
“I was watching the board, obviously for my own reasons, I was trying to get up there myself but when it was out of my hands and I couldn’t get there, I’m rooting Paul on,” he said smiling.
“He’s a young kid, he’s a great add, and I know his caddie, Darren, very well, and is is great great he did the the business”. 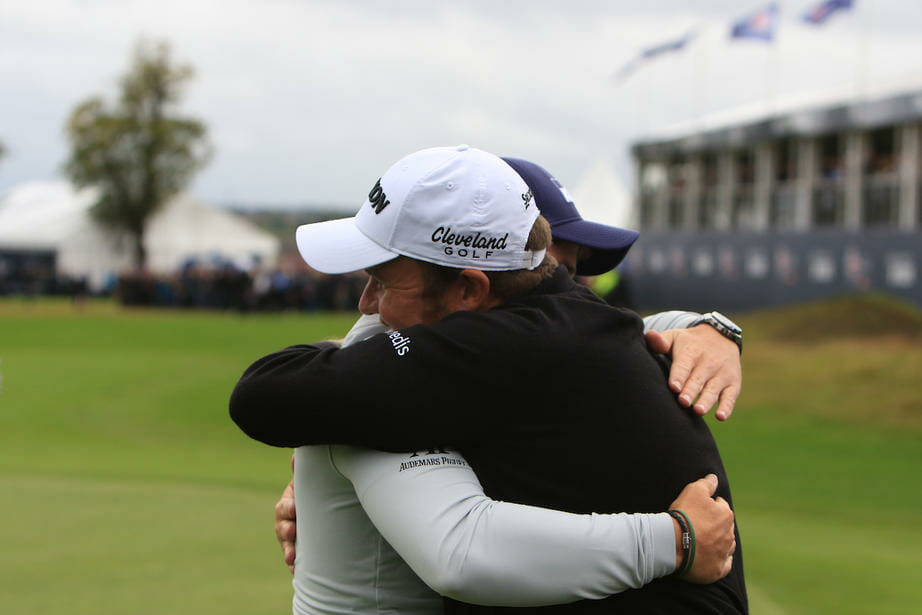 Dunne and Lowry celebrate after the victory – Image by Thos Caffrey Golffile.ie