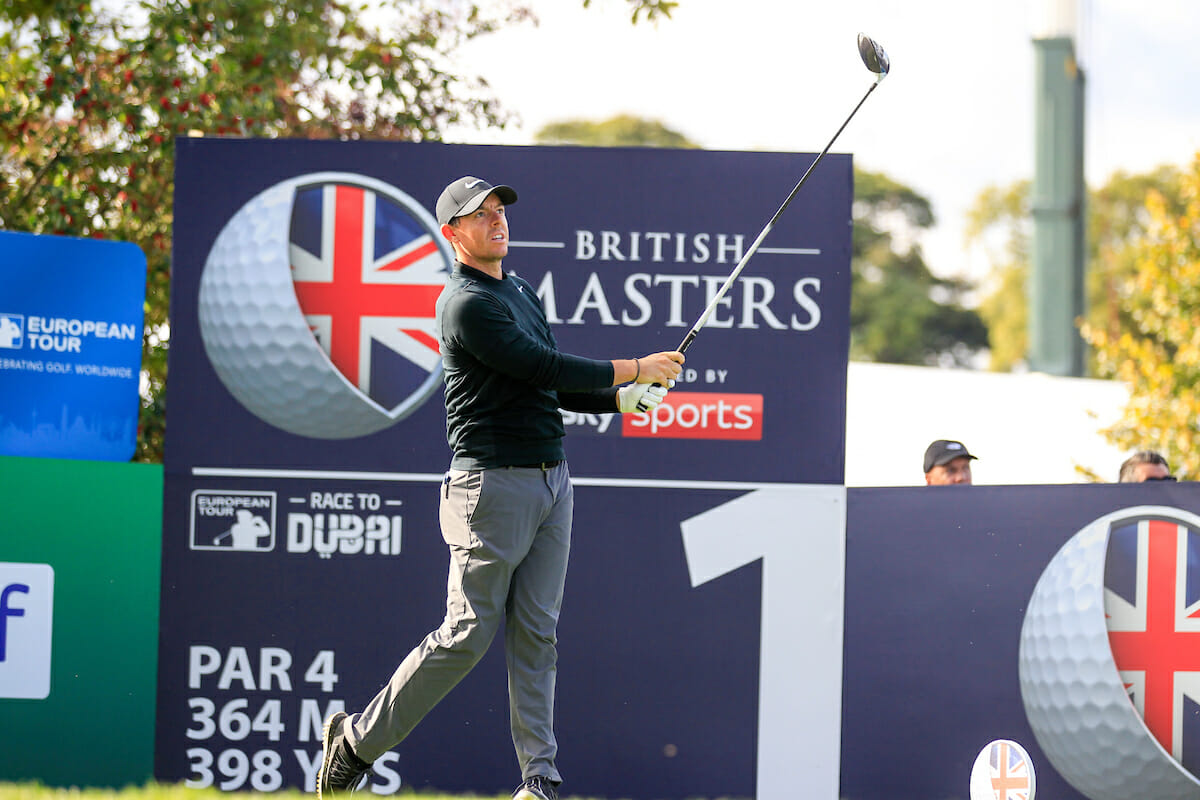 Rory McIlroy kept alive a quest for a first victory this season in producing his lowest European Tour score in well over two years thanks to a sizzling six-under par 64 on day three of the British Masters at Close House.

McIlroy didn’t drop a shot in managing six birdies to end the day in a five-way share of seventh place but only two from the lead in cold and sometimes wet conditions.

Sweden’s Robert Karlsson, 48 emerged from a jam-packed leaderboard and helped by eagling the shortened downhill par four ninth hole on route to a 67 and a one shot lead at 12-under par.

Dunne, who again is knocking hard on a first Tour victory door, kick-started his round with three birdies in succesion from the second hole along with also grabbing three other birdies including at the 13th for a third day running.

McIlroy and fellow Irishman Shane Lowry, who also didn’t drop a shot, signed for a 66 for the duo to be tied with three others and only two adrift of the lead.

McIlroy did shoot a closing 64 in June’s PGA Tour Travelers Championship in Connecticut however his British Masters effort is a lowest European Tour round since a second round 64 on day two and on route to victory in the 2015 Dubai Desert Classic.

And in the process McIlroy has also boosted hopes of McIlroy winning for a first time this season and in what is his penultimate event of the year.

“I felt today I got the most our of my round as I scrambled well when I needed to,” he said.

“Some of these three or four footers that you leave yourself are pretty tricky as the greens are soft along with some heel prints and stuff, so I was just trying to make a committed stroke asI could and thankfully they did for me today.

“So, it was nice as I gave myself plenty of chances and it is always nice to be bogey-free, as well.

You get yourself into contention and you start to think about things and it would be nice to get a win.

“The last couple of tournaments, I’ve been off pretty early on the weekends and had 50 people following me, where there’s thousands out there.

“So it’s nice to get into that sort of environment again. I haven’t shot a low score like that in a while.”

After a no-frills opening two days McIlroy finally gave a huge crowd following the World No. 6 really something to cheer about including chipping-in from pin high and left of the green at the par three, fifth hole.

Then for a third day running McIlroy birdied the par five sixth hole ahead of birding the ninth and 13th holes for a second occasion in three days.

McIlroy then moved to 10-under for the event holing a five-footer from behind the flag at the par three, 17th.

“The crowds out there were brilliant today with a lot of people out there, so it was nice to have that support,” said McIlroy.

“It was also nice to hit shots like that chip-in on five in front of them and give a nice reaction but it has been great all week including a huge number on the tee when I teed-off on Thursday.

“I was a little bit more aggressive today and the course allows that today with the tee moved-up on nine and you can reach the green on 17 while there are two reachable in two par fives.

“I expect to be a few behind at the end of the day ahead of tomorrow but it was nice to hit a good score.”