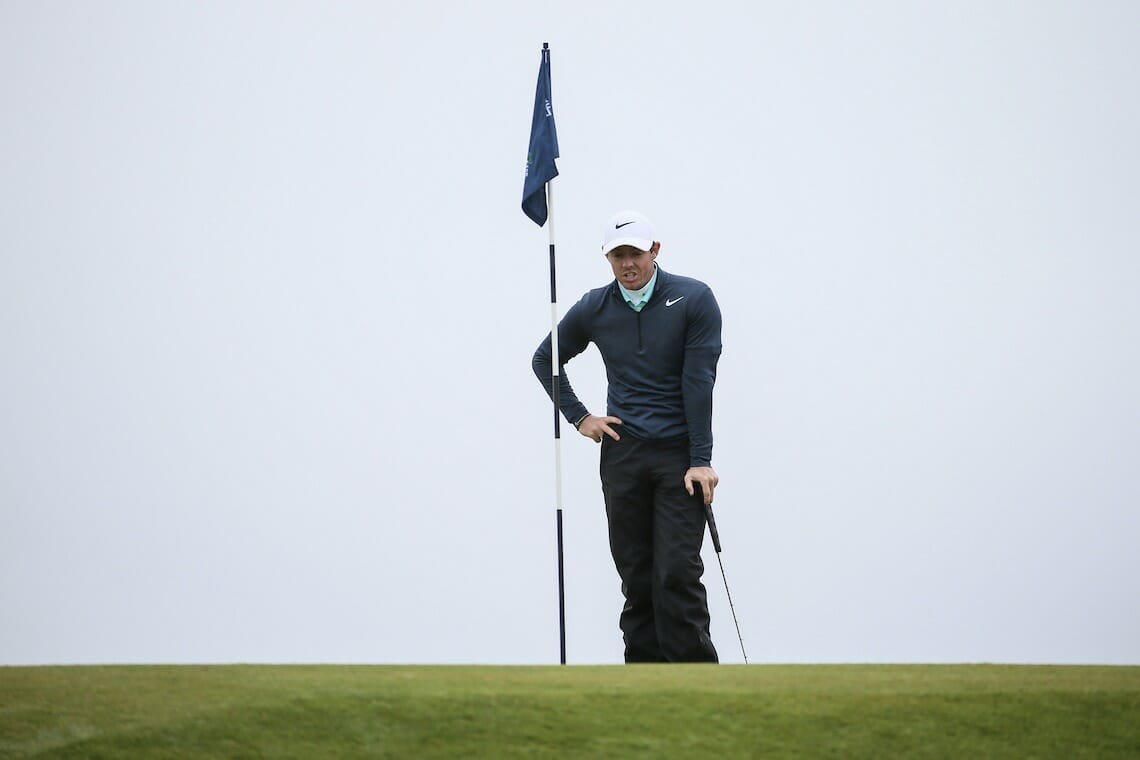 Rory McIlroy is not about to raise the white flag as he strives to keep alive slim hopes of defending next week’s Tour Championship following a second round 69 in the BMW Championship in suburban Chicago.

McIlroy’s 36-hole one-under tally left him in a then share of 48th place in the 70-only field but needs  to now finish first or second  in the event and be inside the top-30 to be going to Atlanta.

“It’s hard because I know that realistically there’s not much chance of getting in next week, but I still want to go out there and play well,” he said. “I’m here, so I might as well try to play well and try to get the most out of myself.”

Again, there is little spark in McIlroy’s game as has been the scenario for the better part of his 2017 season. The World No. 6 went into the second day on the Conway Farms course having bogeyed two of his closing four holes in a one-over par 72 to be trailing 10 shots behind first round leading Marc Leishman of Australia.

But then for a second day running McIlroy’s first coloured number, other than a par, was for a double-bogey ‘6’ and this time at the par three sixth where he missed the green horribly left in rough and some 40-yards from the flag.

However, McIlroy put that aside to birdie the next two holes in landing a 310-yard drive to 44-yards shy of the green and then landing his wedge second shot to nine-feet and knocking in his first birdie of the day.

McIlroy bombed another 300-yard plus drive down the par five eighth fairway and while his missed the green right with his second he showed great touch in chipping to two-feet for birdie.

He then birdied the par four 12th in landing his second shot to 18-inches and while dropping a stroke at the next, and where he played a wild drive way left and was forced to chip out, McIlroy moved inside the top-50 in the 70-only field with back-to-back birdies on 14 and 15.

McIlroy enjoyed a regulation two-putt birdie from 13-feet at them short par five 14th and then at the par four 15th, and where he found water on Thursday in attempting to drive the green, he was successful in landing his drive on the putting surface and two-putted from 44-feet for birdie.

Pars followed at 16 and 17 before McIlroy hit his second-longest drive of the day, an effort of 315-yards that split the 18th fairway, on route to a par and after missing his 10-footer for birdie.

And then after his round he touched on reasons for his decision to contest the Play-Off Series when it seems in talking with him in recent weeks he would have simply preferred to forget the remainder of 2017.

“Some decisions aren’t completely up to the individual,” said McIlroy.

“There was outside expectation from elsewhere. I played these events for two reasons: thinking that I still had a chance, and trying to fulfil obligations elsewhere. So, there was two parts of it.”

It is known also McIlroy was under pressure from the European Tour to contest the Final Series and with his final event of the year to be teaming-up with his father, Gerry early next month in the Alfred Dunhill Links Championsip.