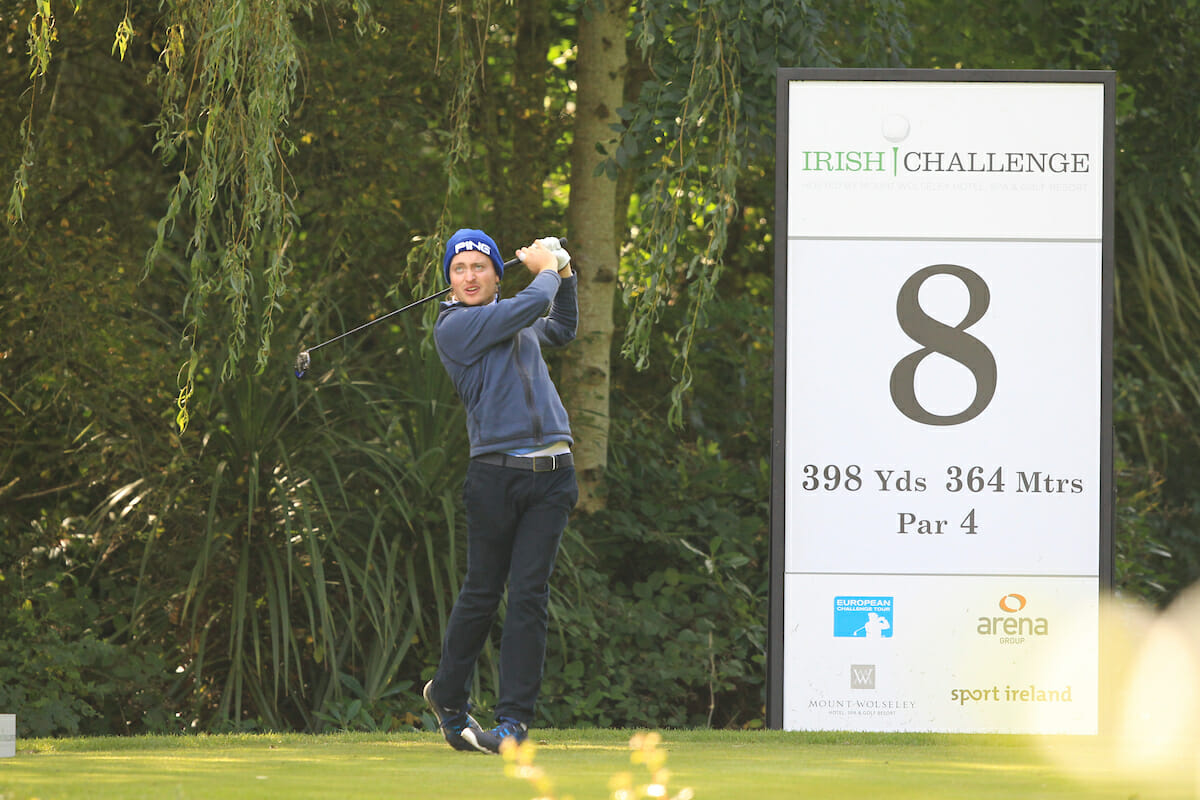 There were two unexpected names leading the home charge after day one of the Irish Challenge at Mount Wolseley Hotel, Spa and Golf Resort, though for the week that’s in it, you couldn’t write the script. Dublin’s David Carey and Mayo’s Declan Loftus are part of a seventeen-way tie for 12th place after sound opening efforts of level par.

The pair share center stage in All-Ireland Final week but unlike the lads on Sunday, this duo will be more than happy with their stalemate, signing off on 72s without a shoulder barge in sight.
Carey’s round was particularly fascinating. The former Carton House amateur who received a late Team Ireland call up fired six birdies and an eagle but a triple, double and three individual bogeys unraveled his good work. Still, with so many good moments in a round of mixed fortune, he summed up the rollercoaster with one fell tweet following his round: “Interesting round out there today! Can’t decide if it should be a lot better or a lot worse.” Neither can I…

Loftus too, had a day of what might have been, though not quite to the heart-stopping levels of Carey. He posted four birdies and four bogeys to return a far from boring 72, proving once more that there’s more than one way to skin a cat in our game.
As for the main protagonist before the week began, it was a disappointing day for Gavin Moynihan who slumped to a two over par 74. Out in 38, a birdie on 12 and a bogey on 16 was as exciting as it got for Ireland’s leading hope in the Road to Oman standings, currently 27th. However, being only six out of the lead, Moynihan will know that a good round tomorrow and he’s more than back in it.
Naas’ Conor O’Rourke is another on the plus two mark, but perspectives change when dealing with someone making their professional debuts. O’Rourke was no doubt battling nerves and can be proud of his opening effort in elite company. Old Conna’s Neil O’Briain also finished on plus two in the tie for 42nd.

Of the rest, Cormac Sharvin and Ruaidhri McGee both carded three over par rounds of 75 to give themselves work to do to make it to the weekend. Rory McNamara and Ireland’s leading amateur, Stuart Grehan, sit a shot further adrift on plus 4, alongside Richard Kilpatrick.
Further afield, it was a day to forget for Gary Hurley and Kevin Phelan, carding 79 and 81 respectively, but worse again for Kevin Le Blanc, eventually retiring injured on plus 11. 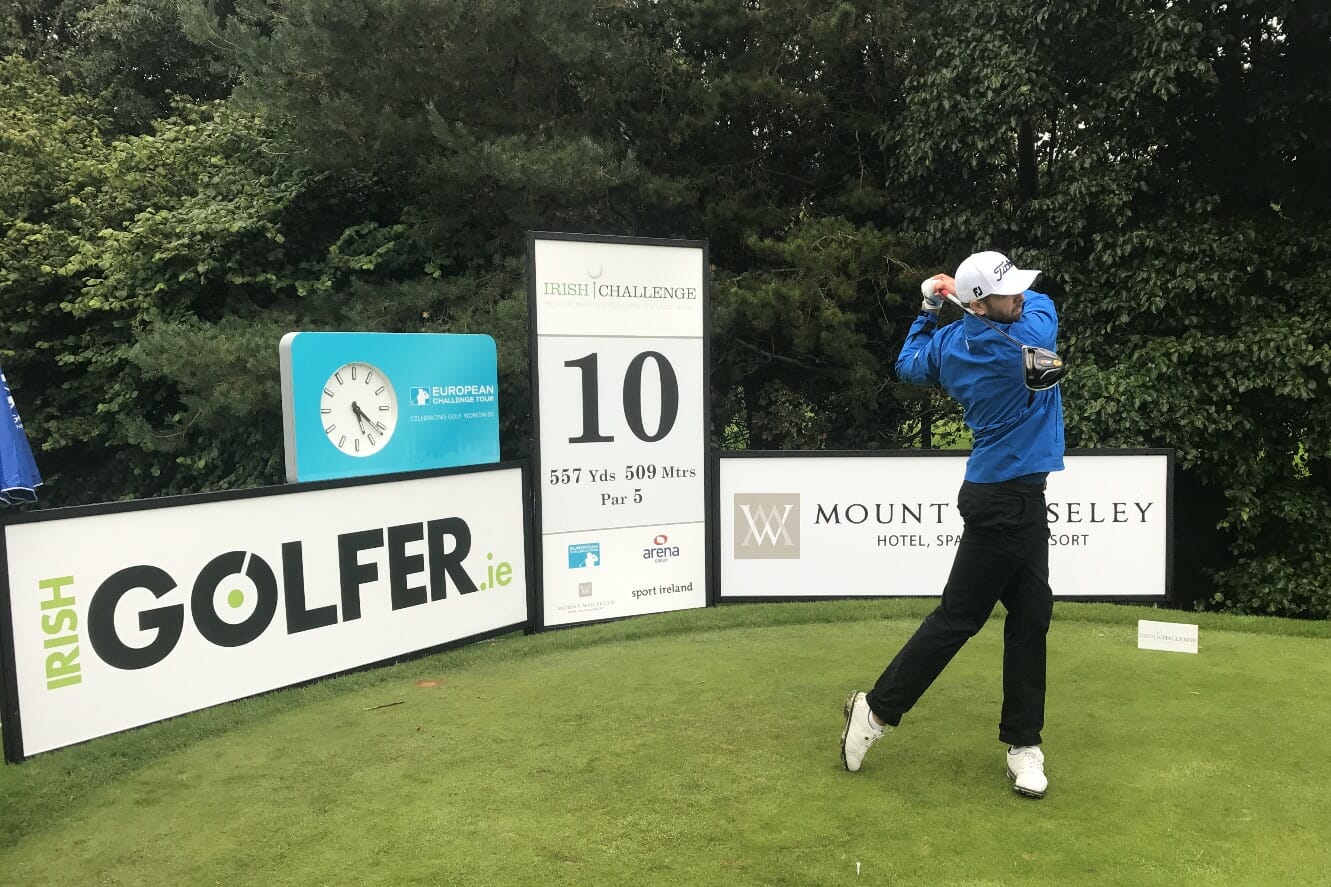 Above –  Ruaidhri McGee teeing off the 10th at Mount Wolseley

At the summit, Oscar Lengden continued his winning form from last week as he fired an opening round of 68 to lead the tournament by one.
The Swede took a maiden victory in dramatic style at the Bridgestone Challenge but, just four days later, showed little sign of fatigue as he made seven birdies – more than anyone else – on a tough scoring day in Carlow to move one ahead of Jacopo Vecchi Fossa in second place.
Lengden has been on rare form in the last few weeks, with back-to-back career-best results on the European Tour preceding his Challenge Tour win in England, and, now 14th on the Road to Oman, his confidence is high.

“It all seems quite easy right now!” said the 25 year old. “It was a funny day today because I didn’t really play that well, but the putter is still very hot so I’m just going to keep rolling the rock.
“I feel like I need to hit the ball better than I did today, I got some lucky bounces, but it feels great – the confidence is up there and I can only see good shots at the moment.
“Even before the win, I took a lot of confidence into last week, and it’s just been a boost and a boost and a boost for the last few weeks and I’m flying with the clouds right now – it feels great, golf is really fun right now.
“I feel a bit tired, there’s no doubt about that, but I’ll have two weeks off after Kazakhstan, and the mental game is strong right now even if the body is exhausted.

“It is a bit of a battle out here with the conditions. I’m not a long hitter so it’s playing super long for me and the greens are very sloping, it’s windy and rainy, so there are a lot of factors that make it tougher.
“I feel like my caddie and I had a great strategy today, avoiding the thick stuff, but it’s a great confidence to have when you know you’re putting well because you know you don’t have to hit every shot that perfect, and I’m just going to keep trying to have fun with it.”
Italy’s Vecchi Fossa is the nearest challenger, with a pair of Scots, Grant Forrest and David Law, sharing third spot on two under par with Englishman Charlie Ford and Darius van Driel of the Netherlands.
It was a day in which the course at Mount Wolseley was the winner with only eleven players breaking par, but with birdies clearly bountiful, it’s a set-up that should make for a thrilling next three days’ golf.