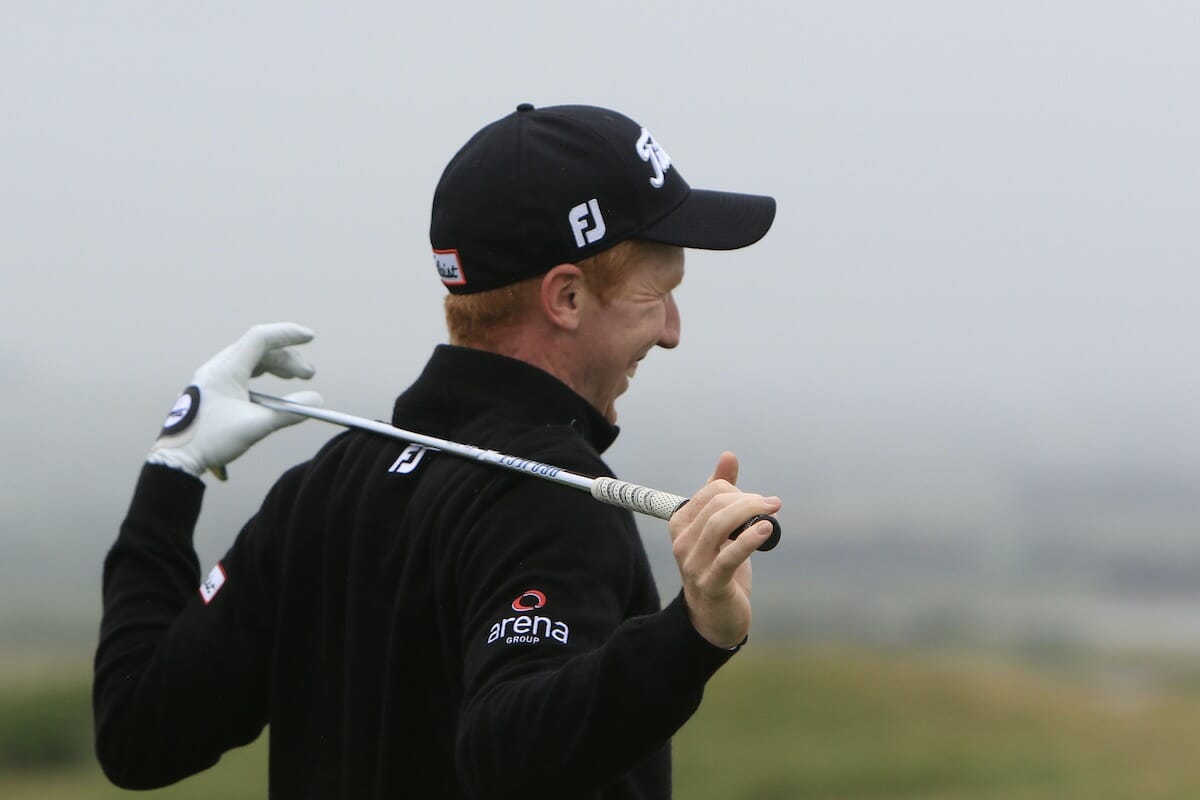 Gavin Moynihan fired the round of the day, a 64, that took him to 12 under par and into sixth place with 18 holes to go at the Rolex Trophy in Switzerland.

Starting on the back 9 Moynihan was fast out of the blocks going out in 30 strokes carding four birdies and an eagle. The Island professional then dropped his only shot of the day on the third ( his twelfth hole ) and then followed this with three more birdies to jump up 20 places on moving day in the select field of 42.

Moynihan is currently in 27th place in the Race to Oman rankings knowing a solid Sunday showing will push him closer to the magic top 15 in the race who will earn their 2018 European Tour cards.

Four strokes ahead of Moynihan, Borja Virto will aim to continue a golden year for Spanish golf after he extended his lead ahead of the final round of the European Challenge Tour’s prestigious Rolex Trophy.
The 26 year old’s third round of 68 took him to 16 under par at Golf Club de Genève, with Dominic Foos and Adrien Saddier his nearest challengers two shots further back, as he bids to become the second Spaniard to win this tournament in three years following Nacho Elvira’s 2015 victory.
Though Sergio Garcia and Jon Rahm have garnered the global spotlight, Virto is equally inspired by Alvaro Quiros and Adrian Otaegui, who claimed a maiden European Tour title in Germany last week.
“It is inspiring me,” he said. “You see all the Spanish guys winning on tour and it’s so great, especially my friends – I have great relationships with Adrian and also Alvaro, I was with him when he won in Sicily.
“To see him win after he had lost his card and was back on the Challenge Tour, it was so inspiring and it helps you to keep going, but it for sure has been a great year for Spanish golf.
“Also here, two years ago when Nacho won, I was there too and it is such a good memory for me and I hope it can be a good omen for me tomorrow too.
“Today didn’t feel as easy as the other two days and I didn’t play as consistently. I played pretty well though, a nice start with a few early birdies, though I wasn’t making as many putts today.

“I’m feeling good. I managed to stay patient because I wasn’t hitting it quite as well today and I had some clutch pars that kept me going and I tried to just keep playing my game.
“If I can win, it will be a good springboard for my season, with a lot of big events to come. It will help me get closer to that top 15 but there is a long way still to go and the Rankings can change very quickly with good results.
“I graduated two years ago so I have some good memories, but it’s not as if I know how to do it. I’m just trying to do the same and I’m just playing my game, trying to win this and go as low as I can every round to beat the other guys.
“I know I’ve got some people right behind me so I’m going to have to go low – this is a course where you can make a lot of birdies and if I don’t make them, someone else will. I will need to be four or five under again tomorrow to win, so that will be my aim.”

Saddier was the first man on course for Round Three and continued the form of the second afternoon, when he shot a 63, to make six birdies and remain in contention for a second victory on the Road to Oman.
Foos, in the last weeks of his teenage years and both the most junior player in the field and, still, the youngest winner in Challenge Tour history, signed for a second successive 67 and the German will no doubt draw on memories of last year, when a closing 65 earned him a share of sixth place in Geneva.