Rory McIlroy’s decision to completely ‘shut down’ his season following October’s Alfred Dunhill Links Championship in Scotland comes as a huge blow to the European Tour.

Not only has McIlroy ruled out contesting the one remaining WGC event in China and the last four Rolex Series events, including the season-ending DP World Tour Championship but he intends to commence his 2018 season hopefully in Hawaii and definitely teeing-up in the PGA Tour’s ‘West Coast Swing’.

It may mean saying ‘No’ to personal sponsors Omega and not contest January’s Omega Dubai Desert Classic.
If so, it would be first occasion since he turned pro late in 2007 McIlroy will not be seen in the Middle East at the start of a new season.
Of course, McIlroy was injured earlier this year and was ruled out of both the Abu Dhabi HSBC Championship and the Omega Dubai Desert Classic.

However, McIlroy stated should he capture any of the four FedEx Cup events, and with the Northern Trust starting later today (THUS) on New York’s Long Island, then he will commence 2018 at the January 4th starting ‘winners only’ Tournament of Champions at Kapalua in Hawaii.

This decision comes after his enormous fitness ‘uncertainty’ following the recent PGA Championship and with McIlroy disclosing he sat down last week with his ‘team’, that also included UK-fitness coach, Steve McGregor, to finalise his off-season plans once he walks off the Old Course at St. Andrews on October 8th.

“In this time off following the Dunhill I am going to get a full health and body screening including blood tests, biomechanical tests, a food and tolerance test to see that if there are any foods that I eat that are causing inflammation in my body,” he said.

“It will be also nice to have this long near three-month lay-off to reflect also to be able to undertake all these things and not to level detail that my team and we hashed it all out for about three hours last Thursday.
“But then I intend to play in Hawaii if I win one of these next four FedEx Cup Play-Off events, as I have never started my year in Hawaii and if I don’t I will most likely start in San Diego.

“Of course, I do have commitments with Omega and playing in Dubai so I am not sure but I do want to play a lot of those events on the West Coast.”.

The immediate loser in McIlroy’s decision post the Dunhill Links is going to be the European Rolex Series and the season-ending DP World Tour Championship in Dubai.
However, it is all about McIlroy finally shrugging off these niggling injuries he has picked-up and becoming more focussed on looking after his body in the years to come.
“I just want to get everything 100% the right way so that for the next 10, 12 to 15 years I know exactly what I am doing and what I am working on, and just leaving no stone unturned,” he said. 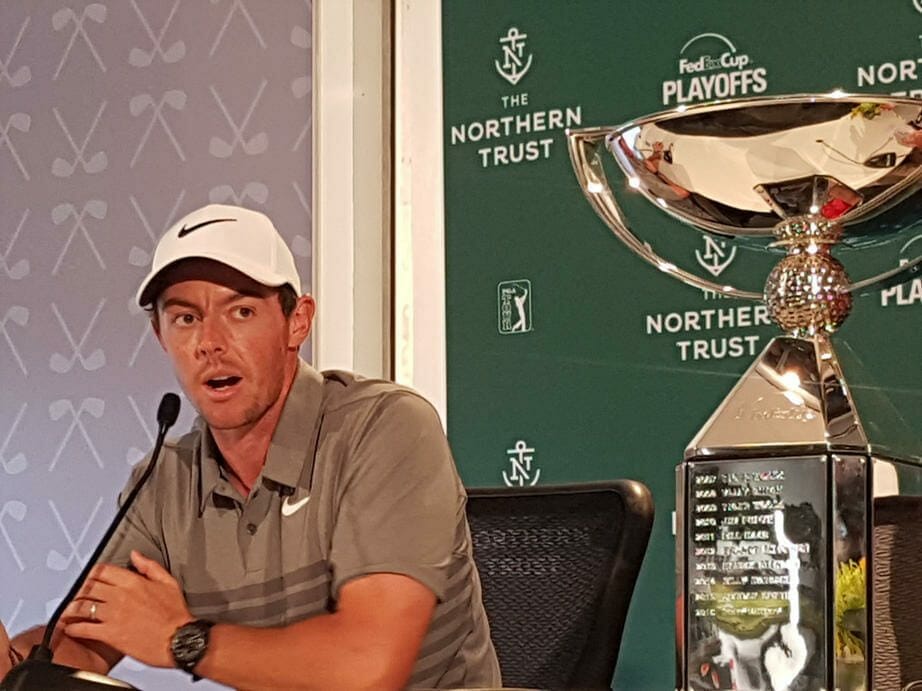 Mcilroy speaking to the press ahead of the Northern Trust – image by wwwGolfbyTourMiss.com

McIlroy, who will tee-up on day one of the $US 8.75m Northern Trust at 12.53pm Irish time Thursday is also looking to keep alive a run of having won at least one event each year since 2008.
He went winless all through 2013 and it was not to the final event that year, and at the Australian Open in Sydney, he managed to continue the streak.

But then his last win was last September in capturing the Tour Championship in Atlanta, and in also pocketing the $US 10m FedEx Cup prize pool bonus. That led to McIlroy being asked what does one do with $US 10m.
“Well, I had a wedding to pay for and we’re just renovating a house, so that’s going to take up a bit of that, as well,” he said smiling.
“I wouldn’t mind winning it again. But no, geez, I don’t know. It’s not as if I’ve ever — not ever, but it’s nice to have it. Yeah, I didn’t treat myself to anything, really. I think that’s because I’ve got an influence in my life now, which is my wife, who would be a little more cautious with money than I would be. It’s nice to have that yin and yang a little bit.”
“And we just bought a new home in Florida and we are just starting to renovate it and that will take a chunk of it”.

McIlroy’s also revealed that despite his strong friendship with Conor McGregor he is not being tempted to jet off to catch the fight in Las Vegas.
McGregor faces fierce rival Floyd Mayweather in Saturday’s historic showdown in the gambling capital of the world and with Irish punters desperate to see the 29-year old McGregor crowned undisputed lightweight champ. McIlroy is rooting for McGregor to deliver the knockout punch to the undefeated Yank.

“Now that I’m off Twitter and social media, all I do is watch YouTube videos of Conor McGregor,” said McIlroy.
“I’m intrigued as Conor talks a good game. If you just listen to his press conferences and what he says, you would think that this guy, he’s the one with the 50-0 boxing record.

“It’s amazing. I’m a big admirer of him. He talks about visualization and the law of attraction and all this stuff that he believes in it and he vocalizes it, and he has the courage to say what he thinks. I’m a believer in that stuff, and I’m a big advocate of that.
“And some of the stuff he does wouldn’t be my cup of tea, but he believes 100 percent in himself and he believes he’s going to go out there on Saturday night and shock the world.”

“So, I’m interested just to see how it all plays out, but I just fear that they do all this trash-talking and they go behind the scenes and they are having a laugh and thinking: I can’t believe we are talking all this public for a ride.

“We are all buying into it and they are like, can you believe these people believe this.
“I just hope it doesn’t turn into it and I hope it’s not in any way fixed. It’s amazing, like we were talking about, imagine McGregor knocks him out in the first couple of rounds. 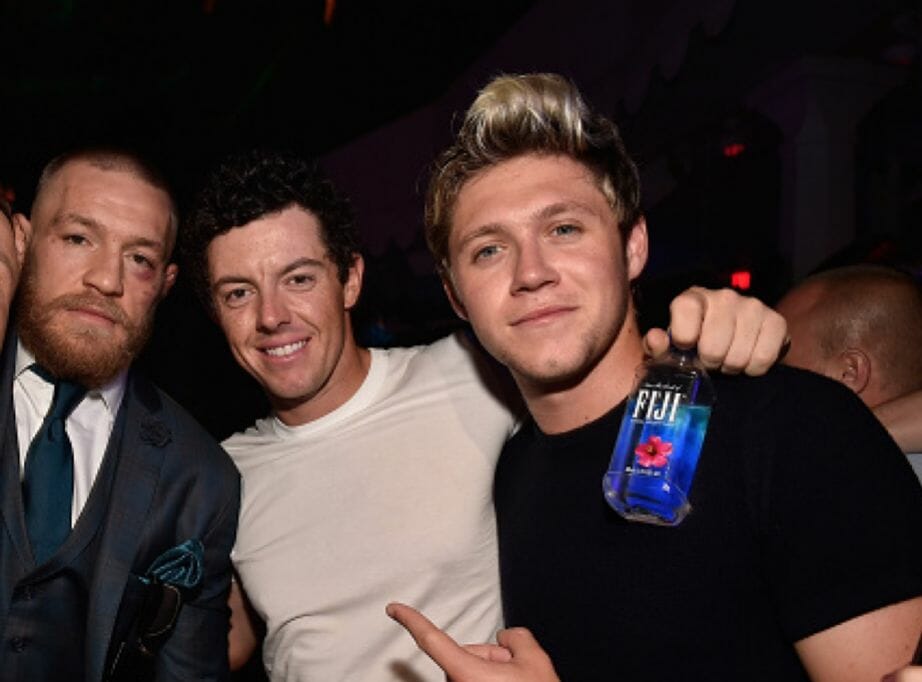 “They would get even more for the rematch. The rematch would be even bigger.
“So it’s just — I just don’t know what that zero on Mayweather’s record is worth, and that’s the thing. That’s his legacy.

“If he goes down and lies down for ten seconds at some point in that, you know, is that worth making an extra few 100 million? That’s sort of up to him.
“Yeah, as you can see, I’m very knowledgeable on it. (Laughter) yeah, I’m interested about it. I’m intrigued. We’ll see how it goes.”