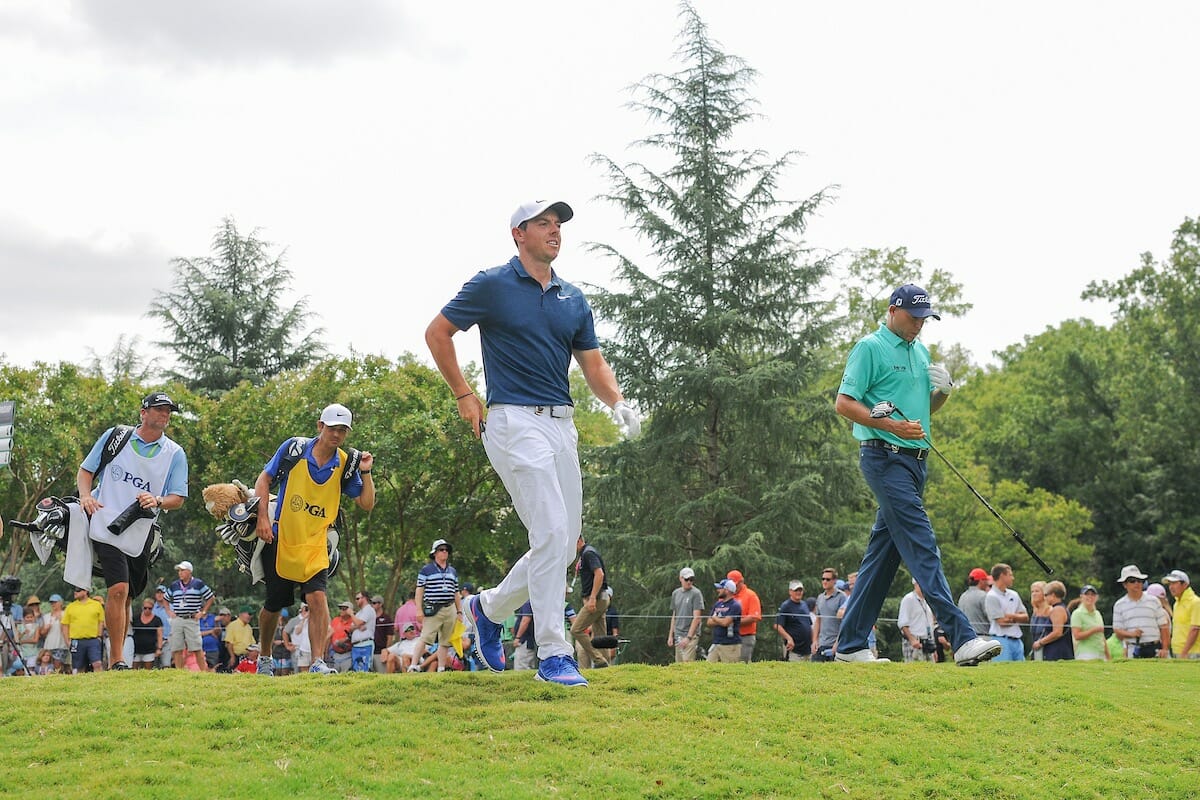 Rory McIlroy ended an indifferent PGA Championship and a third Major-less season not knowing if he will be out of competition for two weeks, two months or until early in the New Year.

McIlroy did produce his lowest round in four days, a two-under par 68 for a then Quail Hollow clubhouse share of 23rd place at one-over par. Though the effort on a toughened course was in stark contrast to the last time McIlroy walked off the suburban Charlotte course after a PGA event shooting a course record 61 and winning by seven shots at 21-under par the 2015 Wells Fargo Championship.

McIlroy was clearly in some discomfort and despite the intense heat and humidity admitted he could feel his left Rhomboid going into spasm ahead of clearing out his locker and heading overnight to Belfast.

“It’s sort of the way it has been the last few weeks and while I have upped my practice coming into these two events because I wanted to feel like I was in a good place in my game,” he said. “But right now it’s a tough one because I go out there and play and shoot decent scores, but when I come off the course, I feel my left rhomboid going into spasm.”

“Inside of my left arm goes numb. So, I don’t know what to do. I have got this next week off to assess what I need to go forward.”

McIlroy revealed he is not on any any pain-killers, anti-inflamatories nor is he seeking direct specialist treatment.

“It’s just bugging me at the moment and has been for some time”, he said  “It has been hurting every time I swing and that is why you have seen me hitting big draws all this week just to protect this side of my body (pointing to his lower left side). My freedom of movement is fine and it just catches a little bit that way.” (again highlighting his lower left side).

“I have this week to just handle the issue myself and because it is joint and bone, anti-flamatories will not do much for it. And there is mixed research out there whether or not anti-inflamatories really work on this type of injury. So, it’s really just bugging me”.

McIlroy intends to catch-up upon returning home with his fitness coach, Steve McGregor, to assess his situation ‘going forward’.

The defending FedEx Cup champion is due to tee-up in the opening event of the Play-Off Series, the August 24th starting Northern Trust on New York’s Long Island. But whether he does or whether he finds himself side-lined for a third occasion this year is anyone’s guess.

“I haven’t spoken to anyone about the problem the last couple of weeks as I just wanted to put my head where it needed to be which was trying to focus on the golf,” he said. “I don’t know what I’m going to do.  You might not see my until next year. You might see me in a couple of week’s time. It really depends. So, everything is up in the air”.

But then McIlroy was quizzed why would he want to return to the Tour if his physical well-being is of concern.

“I feel like a sense of not duty, but I’ve missed a lot of time already,” he said. “If I’m capable of playing, I feel like why shouldn’t I. But then at the same time, if you are not capable of playing at your best, why should you play. So, again, it’s a Catch 22. We’ll see what happens. Assess my options in the next few days and see where we go from there.”

“I know there is a big part of the year left but we really don’t have a big one (Major) until next April so that is really what I am going to try and concentrate on”.

There is also the uncertainty of who will now caddy for McIlroy given good friend and best man, Harry Diamond was simply ‘filling in’ these past two weeks after McIlroy and long-time caddy, J P Fitzgerald split after The Open.

And McIlroy’s face was still lit-up in learning on the 16th hole of his round his beloved Manchester United’s dream start to the new season winning 4-nil over West Ham.

“It was great result and good to see Lukuka grab two and Martial and Pogba one each, so a super start to the year,” he said.