McIlroy hints that rib injury may lead to extended break

Rory McIlroy hinted he will embark on an extended end-of-season break to allow a nagging rib injury to properly heal.

McIlroy suggested the course of action after a third round 73 for a four-over par tally at the PGA Championship at Quail Hollow.
The World No. 4 heads to the final day not only well out of contention but staring a third year in succession without a Major Championship trophy.

All McIlroy could wish for ahead of the final day was a first score of the week in red figures after indifferent scores of a pair of 72s and his third day 73.
“The goal now is I want to sign off on a positive note. It hasn’t been the week I wanted to. If I can finish in the red tomorrow, that could be a top-10”, he said.
“That’s a hollow victory in some sense but at least I would sign off on a positive note.”
McIlroy had indicated earlier in the week he will take next week off before heading to Old Westbury outside of New York for the August 24th starting Northern Trust.

However, McIlroy has now hinted the uncertainty of his fitness by revealing he continues to limit his off-course practice.
“It’s not a factor when I’m out on the course, but it’s a factor off the course in terms of how much time I can practice,” said McIlroy.
“It’s catch 22 because I want to play and I can play, but I can’t put the practice in that I need to to get myself up in contention.
“We’ll see where we go from here. I’ll play tomorrow and assess my options for the rest of the year. I’ve still got a few big tournaments left, so it’s a question of whether I play in all of them or take some time off to get 100 per cent healthy.”

McIlroy also hit out at the pace of play on day three with his round taking 5 hours and 20 minutes, and questioning a decision of the PGA of America to not send the players out in pairs despite Friday’s weather delay.
“I think we’re used to slow rounds on the Tour these days,” he said.
“I guess they probably could have played us in twos and there would have been enough daylight. I don’t know why they put us in threes, so hopefully we go to twos tomorrow if the weather is decent.
“That will get the guys around a little bit quicker. Five hours 20 minutes out there in that heat was a little too long for my liking.”

At the top Kevin Kisner holds a one-shot lead heading into the final day following a dramatic finish to third round , where the famously challenging final three holes claimed numerous victims.
Kisner himself emerged from the so-called ‘Green Mile’ with three dropped shots after a double-bogey at the 16th and a bogey at the last to sign for a one over 72 and a seven under total, while his American compatriot Chris Stroud finished with back-to-back bogeys for a 71 to share second place with Japan’s Hideki Matsuyama.
“I’m happy I’m in the position I’m in. I had a chance to run away from guys and take people out of the tournament that were four, five or six back, and I didn’t do it. Now I’m in a dogfight tomorrow and I have to be prepared for that” said Kisner. 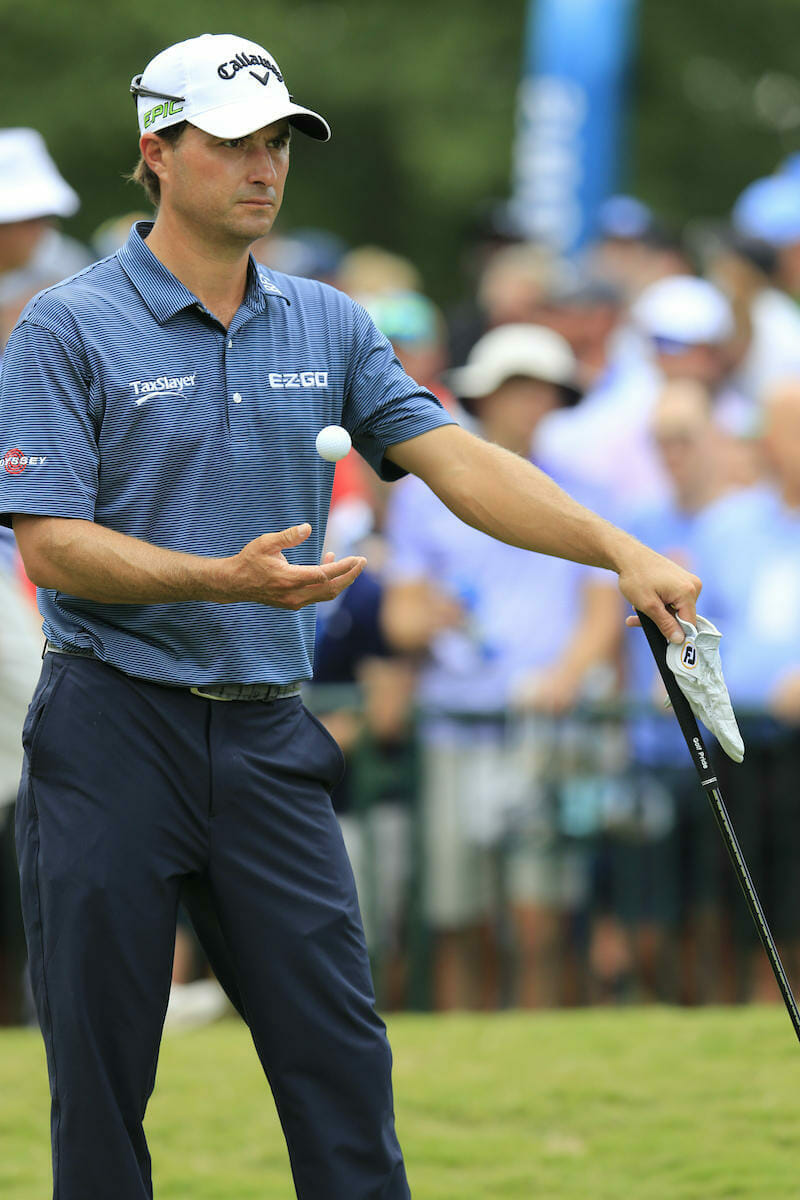 Above – a relaxed Kevin Kisner on the 1st tee of Saturday’s Round 3 of the 2017 PGA Championship. Picture: Eoin Clarke | Golffile.ie

“I’ve been happy with the driver all week. I drove it really well, and then today I hit a lot of great putts that just burned edges and I thought the greens were more difficult to hold putts. Nobody in our group made hardly anything. Obviously not many in the field did, with the scores, and hopefully tomorrow, they will all start falling.”he added.
“I’m pretty good at keeping it all in, and you know, the golf course here is so hard – if you get annoyed, you’re just going to throw away more shots. There’s no real reason to show that emotion. I’ll show plenty of emotion if I win tomorrow, don’t worry.”

Matsuyama, winner of last week’s WGC-Bridgestone-Invitational, emerged unscathed from the brutal final three holes to finish with a 73 and keep his hopes of a first Major title alive, while Justin Thomas (69) of the USA and South African Louis Oosthuizen (71) are a shot further back on five under.The most dramatic collapse came courtesy of Jason Day’s quadruple-bogey eight after attempting a miracle shot from behind a tree, ultimately in vain, as the Australian – playing in the final group – saw his hopes of a second US PGA Championship title fade in one disastrous hole.Italian Francesco Molinari endured a tough start to his third round at the North Carolina venue as he started double bogey-bogey-bogey but he battled to a three over 74 and remains within touching distance, five strokes off the pace on two under.

Shane lowry sits in a tie for 47th on +4 alongside McIlroy eleven shots off the lead held by Kisner.