Cormac Sharvin was the only Irish survivor as the field at the NI Open presented by Modest! Golf was cut down to 24 ahead of Shootout Sunday.

Sharvin posted a final round 66 including four birdies on his back nine to grab a share of 9th place after three rounds and qualify for the matchplay on the final day. Sharvin will face experienced Portuguese tour professional Ricardo Santos in his first 6 hole match Sunday morning at 8:30am. The winner of that 6 hole match will then advance to play Nico Geyger who was one of the top eight qualifiers and was seeded.

22 players qualified automatically but a five-man play-off for two spots was required to determine the top 24 as the tournament now becomes a six-hole match play competition for the final day.
‘Shootout Sunday’ is a series of head-to-head knock-out stroke play matches, with the player with the lowest total score over six holes progressing – a special shootout hole, a shortened version of the 18th, will be used should a play-off be required after any of the games.
22 players, headed by Matthias Schwab, had sealed their spots, with Wil Besseling, Steven Brown, Julian Kunzenbacher, Max Orrin and Manuel Trappel all tied on five-under-par after 54 holes.

Orrin’s birdie on the first extra hole took him into Shootout Sunday, with Brown dropping out with a bogey; the other three all parred before Trappel birdied at the second time of asking and took the final place in the top 24.
In so doing, Trappel became the third Austrian to qualify, joining Schwab and Lukas Nemecz, and he was delighted by his achievement.
“I’m very pleased,” said the 27-year-old. “I had two good chances on my last two holes that got me into the play-off and then luckily I managed to get a birdie and get through.
“I was obviously very nervous. Playing in a play-off is always nerve-wracking but I managed to keep calm and did my best, and it worked out pretty well.

“I’m very happy about my country doing so well, not just this week but in general. We have some players with great potential back home, Martin Wiegele won this year, so Austria is getting on the map.
“Tomorrow will be interesting for sure. I had a bit of experience from the match play event in Spain earlier in the season and I’m sure it will be interesting tomorrow – the crowds and the set up of this tournament is amazing, such a good course, so it should be a special day.”
Orrin’s calm outward appearance in sealing his place belied his inner anxiety, the Englishman a combination of relieved and delighted to have qualified for the match play part of the week.
“That was probably the most nerve-wracking times I’ve ever had,” said the 23-year-old. “Not so much because of the situation, but lately I just keep missing cuts by one, so to actually get one is great for my confidence.

“I birdied 15 to get to five but then doubled 16 and thought that was it, had given up a little bit, but made a couple of birdies on the last two to get in a play-off and I’m over the moon.
“It’s obviously a new format now so I’m not really sure what to expect, but if you play well, the job’s the same thing really, you’ll keep progressing.
“With it being such a short format you won’t get much time to ease your way in, so I’ll hope to keep playing well and see where that takes me.”

Schwab’s 64 was the low round of the week and saw him lead outright after 54 holes on 11-under, one ahead of Nemecz, Ross Kellett and Victor Riu.
The top eight are all seeded into the second round of matches on Shootout Sunday. They are: Schwab, Riu, Nemecz, Kellett, Bradley Neil, Tom Murray, Nico Geyger and Alessandro Tadini.
The first round of matches will be contested between the following players: Christian Braeunig, Jerôme Lando Casanova, Ashley Chesters, Sean Einhaus, Estanislao Goya, Daan Huizing, David Law, Thomas Linard, Matthew Nixon, Orrin, Martin Rohwer, Ricardo Santos, Cormac Sharvin, Robin Sciot-Siegrist, Trappel and Jeff Winther. 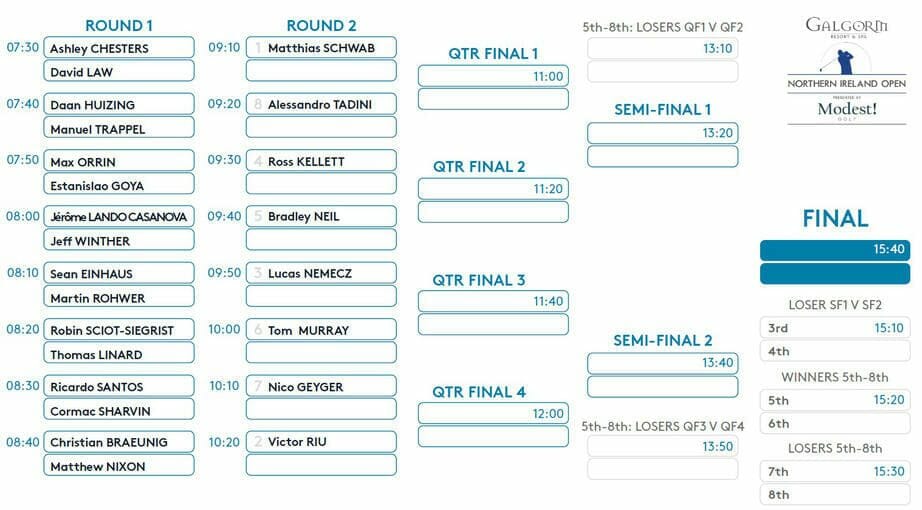