Three time Major winner Padraig Harrington gives an exclusive Hole by Hole guide to IGM ahead of The Open Championship at Royal Birkdale.

1st (448 yards par 4)
A good testing opening hole with out of bounds all up the right. Which club to hit off the tee will depend on the strength and direction of the wind. In 2008 there was bad weather and it blew hard off the left making it a very difficult opening hole but there is an opportunity to be aggressive with a driver. With a bunker in play at about 240 yards, a safe tee shot leaves a semi-blind second, whereas a driver would carry the trouble and make for an easier approach.

2nd (422 yards par 4)
Second and third go up and down so depending on wind you will get one easy and one a lot tougher. A 5-wood is my preference off the tee when it is downwind here to keep it short of the fairway bunkers about 300 out and it is a big target off the tee. It’s a much more difficult hole when it plays into the wind as if you have to force a driver and those bunkers come into the equation.

3rd (451 yards par 4)
A great hole – you must hit the drive straight and avoid the bunkers at just over 300 yards from the tee. I think the tee shot will be the toughest part of the hole, leaving an approach to a green that gathers a little off the left edge. Two and three should even themselves up over the four days scoring wise depending on the wind.

4th (200 yards par 3)
A long tough par 3. Interestingly enough, the danger first appears to be all at the front of the green with the bunkers, but anything turned over going long and left could well run into the bushes at the back, especially if it is firm. I remember there was a lot of wind around this hole in 2008 with a lot of people missing it 20 yards short right. You would be very happy with a par here and move on. 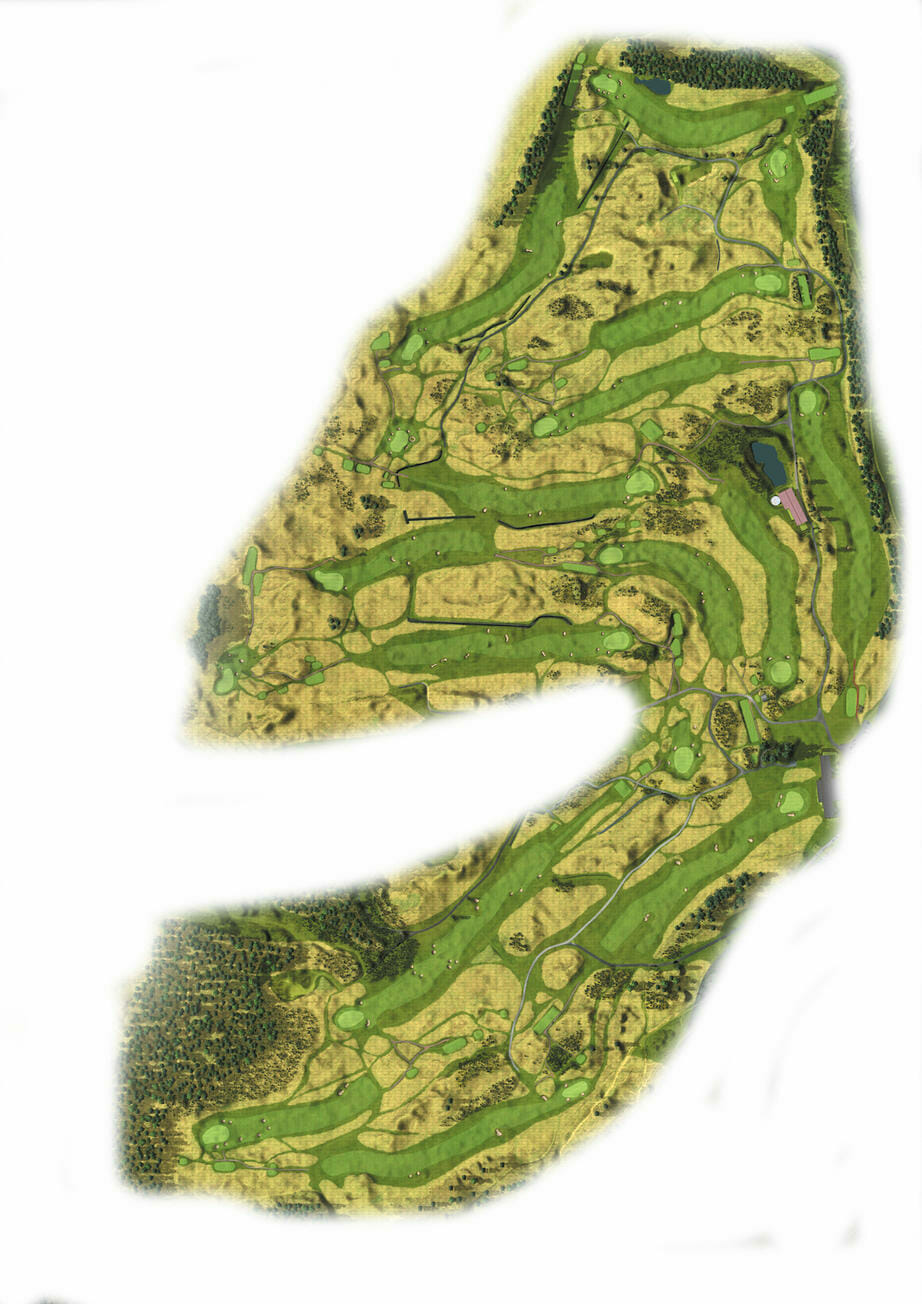 5th (346 yards par 4)
A nice risk and reward hole and you walk right back into a sheltered tee box. If you want to take on the dog-leg with the driver, then the green is obviously reachable in calm conditions. But on the other hand, you could find a nasty lie in the rough or greenside bunkers. The wind again really affects the flight of the ball and coming from the sheltered tee box you need to be aware of the direction it’s gusting in. If you were to lay up and hit the fairway each round leaving a wedge approach, you would possibly score better over the four days than going for it every day.

6th (499 yards par 4)
A tough par 4 usually played into the prevailing wind. Again, the premium is on the tee shot, finding the right spot and avoiding the big bunker on the right at all costs. It’s a really awkward fairway to find and if you lay-up short of or level with the right hand bunker off the tee it leaves a longer approach shot with a wood into the long elevated green. A really solid hole and a lot of players will be missing this green and relying on short game to save a par here.

7th (177 yards par 3)
A really nice par 3 with a lovely shape to the green. You hit from a slightly elevated tee and the green is well protected by bunkers that frame it. The hole is very exposed and in the wind the ball can easily spill off the small green into the bunkers, leaving a really tough up-and-down. I’d be looking to hit the middle of the green and work from there if conditions are similar to 2008.

8th (458 yards par 4)
A very good and very tough par 4. It’s a dogleg left that you can either lay-up out to the bunkers on the right or take some of the dogleg out on the left. All depending on the wind again. The dunes are extremely tall on the left and Greg Norman got into difficulty here in 2008 during the final round. Once you hit your drive between the three bunkers on the right and one on the left, it sets the hole up. If you hit any of the fairway bunkers it is a penalty shot. It has a big, wide green, so even if you are hitting a long iron in, you should have a chance of setting up a birdie putt.

9th (416 yards par 4)
Not a big hole, but a challenging dog-leg that you really must hit the fairway on. If you miss the fairway off the tee it could be a semi-blind second shot to the raised green that has a big slope short of the green. It’s difficult to get up to from the rough and stop the ball going long. Like most of the holes it depends on the wind this year, but the likelihood is that it is not going to be a driver hole for many as the emphasis is in accuracy off the tee shot.

10th (402 yards par 4)
Another big dog-leg that played really tough for the opening few days in 2008 with the wind direction. Not a very long hole but I remember hitting 4-irons into it the opening two days and a wedge into it at the weekend, when the players realised missing in the left rough and cutting off the dogleg altogether was a better play as the rough was light and trampled down. It’s a small green and will give plenty of birdies in calm conditions.

11th (436 yards par 4)
Another very difficult par 4 that has you hitting from a very elevated and exposed tee box. This was one of the most difficult fairways to hit last time as the wind was so strong and straight into you. You need to be careful off the tee in order to miss the well placed fairway bunkers placed on both sides of the fairway at 278, 309, 321, and 340 yards out from the tee. The second shot needs to be precise and well placed given the angle at which the green is set.

12th (183 yards par 3)
A really good par 3 with an attractive green setting surrounded by dunes. You can get plenty of good kicks and bounces off the hills down onto the green here. For whatever reason in 2008 this was a tough hole to club on as the wind was gusty and swirling. You need plenty of club and commitment to the shot in order to control the ball into the breeze. Missing the green leaves a tough up and down, especially from the deep front bunkers that need to be avoided.

13th (499 yards par 4)
Another big par 4 that you must attack. The tee shot with driver and positioning is vital. Even though it will generally play downwind you really have to avoid the fairway bunkers from about 280 up to 350 off the tee. It’s a real challenge to avoid the traps but once the tee shot is negotiated and you are on the fairway you are left with a shot to a green surrounded by sandhills. It’s a big solid hole that’s all in front of you. Playing downwind your approach must not go long here too, so it’s a tricky hole.

14th (200 yards par 3)
It is difficult to measure the strength and direction of the wind from the tee on this hole due to sand dunes surrounding the tee box. The approach to the large green is relatively narrow and pin placements can take the hole up to nearly 220 yards. Like all the Par 3’s at Birkdale I’d be looking to hit into the middle of the green and go from there giving myself a look at birdie but very happy with pars in tough conditions.

15th (542 yards par 5)
The first par 5 you encounter so all of a sudden you feel you have all this opportunity. The tee shot still requires some thought as there is a lot of gorse to avoid and bunkering at around 300 yards from the tee. After a good drive, normally it’s on in two but it has a really awkward green with three different sections and much more undulating than most on the course. It’s the first proper opportunity at a birdie but even if you are on in two it’s no giveaway.

16th (438 yards par 4)
A nice par 4 made famous by Arnold Palmer hitting out of the bush on the right. Again it’s all about hitting the fairway here. With an elevated green and the thick rough on the left and some gorse and bunkering on the right you need a good lie to keep control of the ball on the uphill approach. The approach to the green is well protected too with a number of deep bunkers and the wind a big factor.

17th (567 yards par 5)
The 17th is always a tough one as it’s perceived as a giveaway birdie. It’s out of character with the rest of the course as it has given you absolutely nothing for 16 holes and then presents this birdie opportunity. The hole is normally played downwind so you can get home even without driver off the tee. In 2008 on the 71st hole I hit two five woods to the green. Once you hit a solid drive past the sandhill on the left and avoid the bunkers on the right, then you give yourself a good chance of reaching the green and picking up a shot or two.

18th (473 yards par 4)
A big solid finishing hole as you would expect for the closing hole of a Major Championship. Two solid shots are always required here especially off the tee to a tight fairway avoiding the bunker and out-of-bounds on the right and a bunker on the left about 300 yards out. Distance control on the approach shot is key, as you need to avoid the bunkers that guard the front of the green, but then avoid going too long and facing a tricky up and down in front of the famous clubhouse.

This article appeared in the July edition of Irish Golfer Magazine and you can read the entire issue by clicking here.