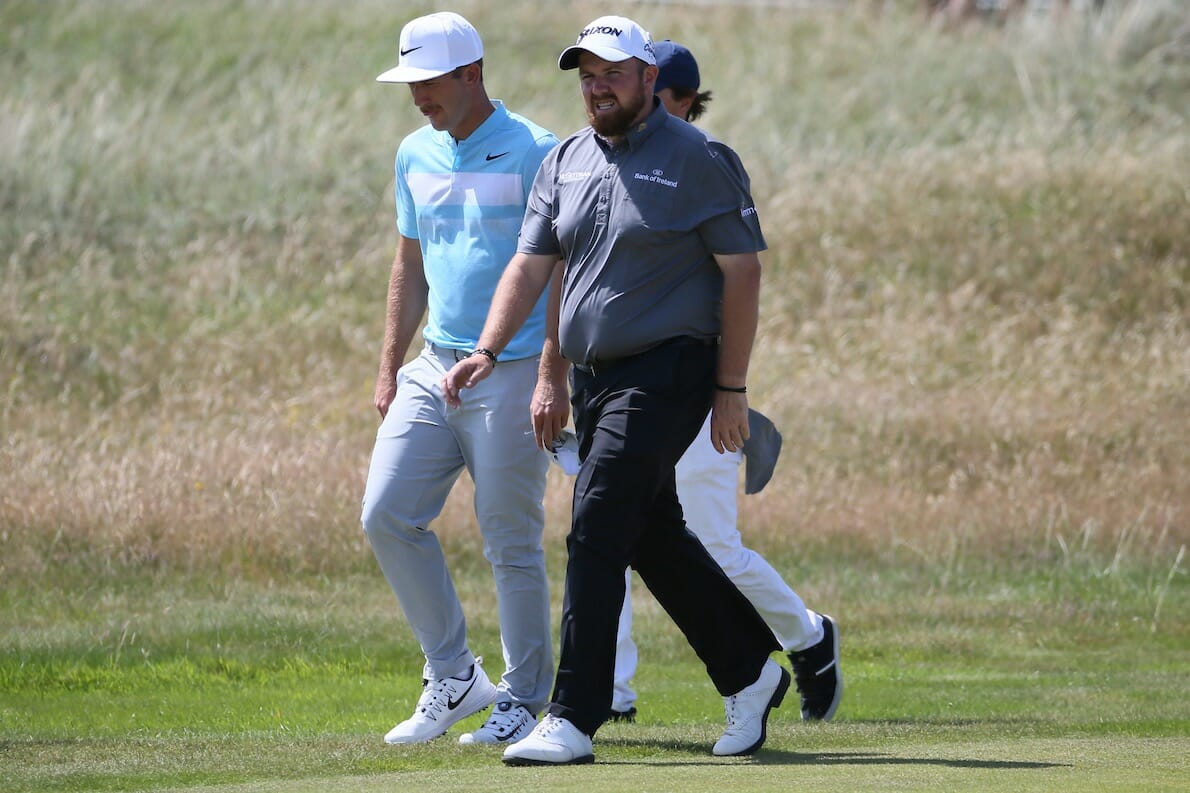 I had to laugh at Padraig Harrington this week tipping Shane Lowry to win the British Open. It was only two weeks ago that Harrington clipped Lowry around the ear for rising to what’s written of him, and what does Padraig go and do? Land him in it further!

Maybe it was a test, but whatever chance Lowry had of avoiding the endorsement evaporated upon media questioning ahead of The Open Championship starting tomorrow. Shane’s been a little tetchy under oath of late, so, how is he feeling about his prospects this week?

“The best golfers in the world are here. I’ll go out and give it my best. I’m playing ok. I felt like I played nicely at Portstewart, and I played more golf last week than I’ve ever played on a week off, and a lot of links. I feel ready coming into it. I feel like I’m hitting the ball well. I feel like I don’t need to be here doing too much. I feel like I just need to get to know the golf course.”

Knowing the golf course goes without saying, but even more pivotal to Lowry in his career to date is liking what he finds. He’s not alone in being particular, but when Shane finds his happy place he is a different animal to come up against.

”Certain courses you go to, you don’t really like, even when you go back. No matter how well you are playing, it’s hard to get to like. It just goes to show you what I do in Wentworth every year. When I get to courses that I really like… When I got to Oakmont, I loved it straight away. When you get to certain places you just love it and you feel at home there. This certainly feels like one of those.”

Lowry chose to skip the Scottish Open last week having shown enough signs of encouragement in his performance at Portstewart the week before. He teed it up in the Bank of Ireland day at Royal Dublin last Thursday and played with an 18 handicap Robbie Keane on Portmarnock Links on Friday. Now with a couple of rounds under his belt at this smashing Birkdale layout set against the serene Liverpool coastline, all signs point to the Clara man having found some peace of mind on a track that suits his eye.

“It’s possibly one of the best courses I’ve ever played. There’s certain spots you can take bunkers out of play, but there’s a lot of holes that you have to take them on. There’s 2-iron down the fairway, to leave yourself a 6-iron in, but 5 or 6-iron into these greens isn’t going to leave you many places, so you have to just take the golf course on a little bit. It’s good.”

Lowry will welcome the wind this week, as will the whole Irish challenge no doubt, and it is indeed expected to blow for the four days. However conditions won’t come much more brutal than his infamous ’09 Irish Open win at Baltray as an amateur, though he is already mentally prepared for a similar battle should the gods decide.

“I played 18 [Monday] with Lee Westwood and Mark Foster. We had a nice day. I felt like I drove the ball well. I’ve a 2-iron in the bag that’s very good, and I hit that well. That’s going to be key around here this week. There’s going to be a lot of that off the tee for getting the ball in play.”

As so often is the case in Open championships, it will be the players who minimise mistakes that will contend come Sunday. Short grass is king in terms of ball control, with wispy hay, craterous bunkers and looming high dunes all awaiting your every stray bullet. Few will be better versed for such obstacles than Lowry, and he’ll be hoping to put a disappointing year behind him in the best way possible.

“I feel like I am really hitting the ball well. I am hitting it solid and I feel good on the greens and my chipping is decent. I feel like my game is there and I feel like some week it is all going to come together. And I am just hoping it’s going to be this week.”