No matter what you do in life there will come a point in time when you’re met with an opportunity to better yourself. Be it going for a job promotion, furthering your education or facing a fear, the bolder path will often be determined by one simple question, ‘Am I ready’?

For Gavin Moynihan the answer was a straightforward one. For as long as he could remember being a professional golfer was always the goal, and when that opportunity arose after his 2015 Walker Cup success, he backed himself to fulfil his ambition.
“I had played with a good few of the established players on Tour, Harrington, Lowry, Darren Clarke, and talked to them about the whole ins and outs of it. I had won the Irish Amateur twice, the Scottish Amateur once, played Walker Cup a few times. I knew I was at the top end of the amateur game and it felt nearly right to move out of it.

Call it a natural progression but I’ve always wanted to turn pro, and I knew I was ready. I remember Neil Manchip (Lowry’s coach) had set up a meeting with Shane at Carton House and a few of us went along to it. He was telling us, not what we had to achieve, but what to expect on a day-to-day basis, and let’s just say it didn’t put me off.”

Moynihan was about to be faced with his biggest challenge yet, a transition from the privileged amateur ranks into one of the most competitive, cut-throat environments in sport. But then the fragility of life put it all in perspective. Long-time coach, mentor and great friend, Hugh Jackson, tragically passed away after he collapsed during the Connemara Pro-Am in September 2015.
“It was a huge shock because I’d only been talking to him twelve hours before I got the news. Jacko’s been with me since the day I picked up a golf club at Donabate. It was tough to take and it definitely fed into last year – confidence was low and I was lost in my swing. Without him around it probably took me six months to find it. Whereas before, Jacko was a great man to go out with me for a few holes at The Island any Friday I was home, and he’d have my swing sorted after three or four shots. He just knew the craic.”

Such a void took time to fill, with Moynihan eventually turning to a familiar face in Shane O’Grady, a former coach from his Leinster panel days. “I’ve known Shane since I was 12 or 13 and he really felt like the only man to go to. He’s quite technical and because I didn’t know where my bad shots were coming from, I needed that. It was hard at the start, there was a lot of information. But as it turned out it was literally three small changes and I’ve been hitting it very well ever since.”

It was a long, bumpy road to that point however, and it wasn’t just an errant golf swing that had Moynihan feeling a little lost. Out from under the protective umbrella of the GUI, he laughs as he recalls the reality checks of going it alone initially. “Going to the Europeans with the GUI you would just arrive at the airport in your suit with a passport and you’re away. Flights, food, hotel all sorted. You’re looked after so well and you probably don’t realise the amount work that goes into it until you have to do it for yourself. I found it very hectic. It’s like anything though, it takes getting used to. Some people take to it quicker, the likes of Paul Dunne for example. But Jesus don’t get me wrong, it’s not tough. I love it… It’s great!”

On the course and Moynihan’s rookie year was proving a steep learning curve. Where in his amateur days he could get away with a slow start, the pro ranks were proving much more unforgiving. “The biggest difference for me was the cut mark by a mile. I was missing cuts by one or two, not the end of the world, but when I eventually made one I was quite relieved just to know I could actually get over the line.  You read about Justin Rose missing twenty cuts in a row and you’re thinking…well you’re thinking, it’s getting under your skin. I probably put too much pressure on myself last year looking back. Went in too aggressive, putting too much focus on where I would finish and forgetting how to get there.  And as a result of that I had no category on the Challenge Tour going into this year.”

It wasn’t that his game was a long way off. There were some weeks that Gavin left a tournament on a Friday having played well and missed the cut. “The one in Turkey there a few weeks ago was a five-under cut, Czech was three or four-under. Some Challenge Tour courses I find nearly too forgiving at times. You can get away with bad tee shots. I didn’t drive it great at the Czech and finished tied-16th. You can get away with the odd spray whereas that would be a chip out on the main tour.” 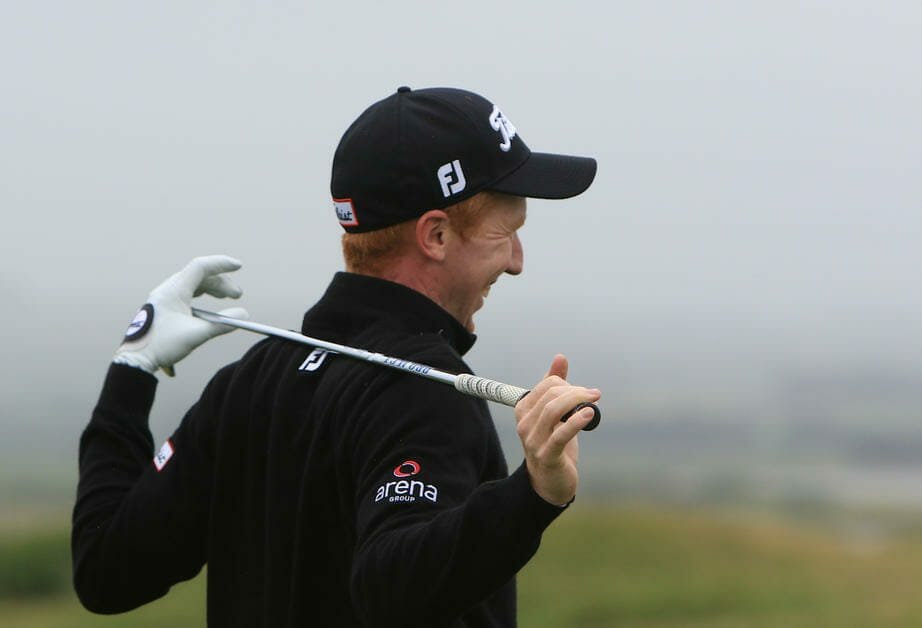 Yet 2016 wasn’t all doom and gloom and undoubtedly the brightest ray of sunshine came with Moynihan’s excellent showing during the Irish Open at The K Club. “That was a great week, especially having missed the cut by one the previous two years as an amateur. And I’d Colin Byrne on the bag which was a huge plus. Going ‘round each day telling me stories about the times he spent caddying for Goosen and Els, he made it feel like I was just playing a few holes in the evening, but with him as my caddy. I got on very well with him. A lot of it was down to him I felt… Well… not a lot of it, but he helped me big time and it was great to get a nice cheque to top it off!”

To salvage what was an otherwise disappointing rookie season, Moynihan flew to Tour School in Portugal to a venue that had been kind in the past. But the past is soon forgotten and his game was a long way off. “That was probably the lowest point of last year. I wouldn’t normally dwell on things. I’d look forward to getting back out there. But I put the clubs away for three weeks and didn’t touch them. Then I went over to Florida in November and that’s when the good work with Shane started to kick in. I went to Dubai with Paul Dunne and Gary Hurley for ten days in January after that and I could see the hard work bringing my game around nicely.”

But did he always maintain such belief? There are few lonelier places than a golf course when things start to go awry, and with Moynihan having long been the name on everyone’s lips as he rose through the amateur game, was there ever a sense that his supporter’s interest had started to wane? “There was maybe a few people asking questions of me; was I good enough and that? But I never questioned myself; other people might’ve but I knew I was good enough. I’d played with some of the best players in Ireland. I was playing regularly with Dunners and Gary. I just needed to get my head right and the swing back in order and I knew I’d be ok.”

There was no grand eureka moment that sparked his game into life, rather a switch of focus in his practice and an economical approach to his tournament preparation that can only come with experience. “I was so focused on my ball striking last year I nearly forgot to practice inside 70, 80 yards and my putting – usually the best part of my game. And I probably played too much before the tournaments last year too. Most tournaments I’d arrive on a Monday, play nine, then eighteen Tuesday and maybe eighteen Wednesday too.”
“I met Philip Walton at The Island and that was one of the biggest things he told me. You have to manage your time. Shane said the same thing – don’t overdo it. The tournament starts Thursday and you don’t want to be knackered before you start. I was certainly tired starting some tournaments last year. It’s not that I’m taking it handy now but you learn to manage your time better with experience. If you’re playing well you shouldn’t be too uptight about your preparation, you’ll do alright.”

Six missed cuts last year, he could’ve been forgiven for being a little despondent, but through a positive outlook and a solid winter’s workload, Moynihan was unflinching in his belief that good things were on the horizon. “If you’d asked anyone in The Island before I won at Newcastle; they’d always be asking me, how are you playing, how’s the swing, and I’d tell them that there was a good run coming. I didn’t necessarily know that was going to mean a win, but my putting was getting there, I was hitting the ball nicely and I knew a decent run wasn’t too far away.”

With a new putter in the bag and a new set of fitted-bats from Titleist, Moynihan embarked on his season afresh and opened with a solid tied 25th at the Turkish Airlines Challenge in April. That result seemed to lay the foundation and Moynihan headed to the EuroPro Tour’s Lookers Championship quietly confident. A final round 68 saw him pip good friend Dermot McElroy by one to win it, and with that, a man who went into 2017 with no category at all suddenly had a full well of water. He backed up his maiden professional win with a second at the Andalucía Match-Play on the Challenge circuit to dispel any doubt that he belonged in this company, and it doesn’t take a crystal ball to predict a bright future lies ahead for the man from Donabate.

“I pretty much get unlimited invites now for the rest of the year which has been the biggest goal – finally being able to make a schedule. The fact that I now know that if I play well I can win is probably the most satisfying thing of all. I can compete out here. The goal for me now is to make the Top-15 in the Order of Merit, but there’s still twenty-odd tournaments left right up to November. It’s a good start but nothing more than that. But with a nice schedule from here on in I’d be hoping to get my main tour card. Whether that happens out here or at Tour School, the end goal remains the same. I’m looking forward to the rest of the year now so we’ll see what we can do.”

After his final round charge today at Portstewart carding a 64 to finish on -13, Moynihan has certainly capatalised on the Team Ireland start he received to the Dubai Duth Free Irish Open. Well played Gav, soak it up. You deserve every bit of it.