There was Samson and Delilah, Romeo and Juliet, Bonnie and Clyde, Laurel and Hardy while the golf world had Mickelson and Bones. But that is no more as after 25-years the longest golfer and caddy relationship is over.

In a joint statement the announcement came that Jim “Bones” Mackay will no longer caddy for the five-time Major winning Mickelson.

Mickelson won all but one of his 49 worldwide victories with the now 52 year old “Bones” on the bag but it has been four long years since Mickelson last tasted success at that was at the 2013 Open Championship.

It has long been a unwritten law in golf that when a golfer is playing poorly, the first to go is the caddy.

However, “Bones” was not just a caddy.  To Mickelson and his family he, his wife and their own two children were as closer than direct relations.

“I will always be grateful that I was around to witness so much of Phil’s career. When Phil hired me in 1992, I had one dream, to caddie in a Ryder Cup. Last year, at Hazeltine, Phil played in his 11th straight Ryder Cup. It was cool to have a front-row seat.”

The job now of caddying for the current World No. 24 will go to Mickelson’s younger brother, Tim a former golf coach at Arizona State University who now works as the manger to Jon Rahm. Indeed, when “Bones” became sick earlier this year at the WGC-Mexico Championship Tim Mickelson filled in.

In the statement released by Mickelson he mirrored the remarks of “Bones”,

“After 25 very rewarding and memorable years, Bones and I have mutually decided to end our player-caddie relationship”, said Mickelson.

“Our decision is not based on a single incident. We just feel it’s the right time for a change.”

“Bones is one of the most knowledgeable and dedicated caddies in the world. He is always prepared and has the ability to make decisions in pressure packed situations. Bones is without a doubt one of the most thoughtful people that I have ever known. The next player to work with him will obviously be very lucky.”

“My relationship and history with Bones far exceeds golf. He has been one of the most important and special people in my life since the day we met and I will always be grateful for everything he has done for me. Amy and I, and our children, will always think of Bones, Jen, Oliver, and Emma as family.”

“We are looking forward to sharing life and friendship with them forever.” 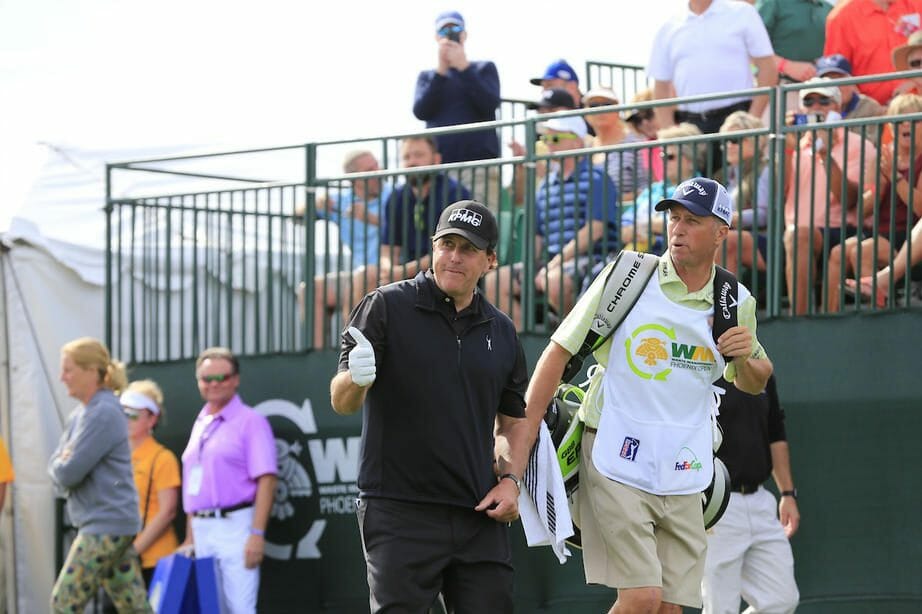 Mackay began his caddying career in 1990 carrying the clubs for future Masters champion Larry Mize. But it was another Masters winner in Fred Couples who was responsible for labelling MacKay with the nickname “Bones”.

“Freddie was trying to get my attention from across a room, and he didn’t know my name,” Mackay said in a 2010 interview. “Finally, he just yelled, ‘Bones.’ And it stuck.”

The only Mickelson victory Mackay missed was in 1991 before they even knew each other when Mickelson captured the Tucson Open as an amateur – the last player to do so.

“I wish Phil nothing but the best,” Mackay added.  “His game is still at an elite level, and when he wins in the future (definitely the Masters), I will be among the first to congratulate him.”