Portrush caddie Ricky Elliott’s first reaction was to buy a 12-pack of Heineken in grabbing  a $US 1/4m victory windfall in helping steer Brooks Koepka to victory in the U.S. Open at Erin Hills.

Koepka, 27 produced a back-nine birdie blitz shooting a closing round 67 to storm his way to a four-shot victory and in the process Koepka matched the 16-under-par winning 72-hole record set six years ago by Rory McIlroy.
As well, Koepka became the seventh straight first time Major Champion.
“That’s probably one of the coolest things I’ve ever experienced and to do it on Father’s Day it’s pretty neat,” he said.
“I didn’t exactly get my dad a card, so this works.
“I felt confident all week. So, to feel as confident as I did on a Sunday of a major and coming down the stretch was pretty neat.”

The win now means Portrush can boast having produced  two U.S. Open winners after Graeme McDowell claimed the title seven years ago.
Last year, Koepka was a member of the victorious USA Ryder Cup team but having heralded his presence to his own countryman a year earlier in 2015 by winning the Phoenix Open on the PGA Tour.
Among the first to get onto Twitter and congratulate Koepka was McIlroy, and one of Koepka closest friends.

Elliott has been caddying for Koepka for four years, including being on the back in Turkey and a year later when Koepka broke through for a first PGA Tour win at the Phoenix Open.
In fact, their relationship began on the secondary Challenge Tour a year earlier in 2013 and with Koepka displaying his already enormous talent in winning three times to earn automatic main European Tour membership for 2014.
Late last year, and despite getting plenty of stick for his European bagmen, Elliott caddied for Koepka in the victorious USA Ryder Cup team.

And while Elliott became an American citizen in 2015 he still retains a strong Northern Ireland accent and has family residing in Portrush.
“It’s unbelievable. It’s, it’s, it’s just incredible to win a U.S. Open”, said Elliott
“I’m an American citizen, believe it or not with my accent. I did the Ryder Cup. So to win my national open is great!”
Elliott, and grinning from ear to ear, was asked if winning a Ryder Cup was better than a U.S. Open.

“No, a U.S. Open”, he said.  “Obviously the Ryder Cup’s close, but if you’d won a couple majors and you’d won a few times otherwise, like Phil [Mickelson] or somebody, but we’d only won once and we’d never won a major, so obviously your major has got to be on top.
“I have now been with Brooks for four years and he just stayed so patient like everybody else did. I mean his driving has been really good for the last two or three months. 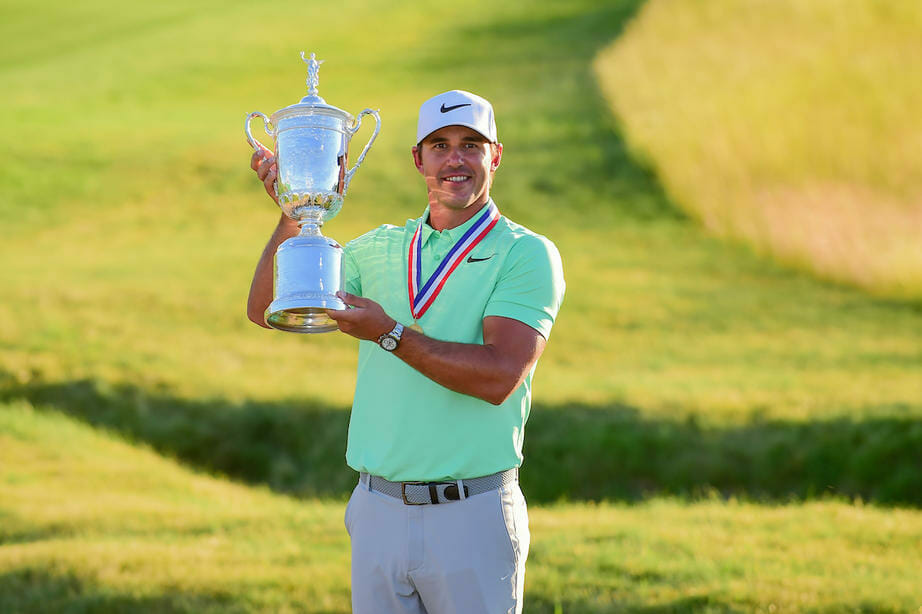 “When we came Monday a week ago to see the course, we just thought, right, it’s obviously not a bombers course … He’s done quite well at the British Open and things … he’s played a lot of links during the Dunhill Links, not that it was particularly linksy, but it had that feel … so playing courses over there has helped him”.
And what you will now do with the riches of caddying for the U.S. Open winner.
“Buy a 12-pack of Heineken,” said Elliott laughing even though one of Koepka’s is Michelob Ultra.
“I just need a cold one”.

With the winners cheque being a whopping $2.16M and the caddie taking home a nice 10% cut Ricky can enjoy quite a few cold ones when the dust settles on this win.