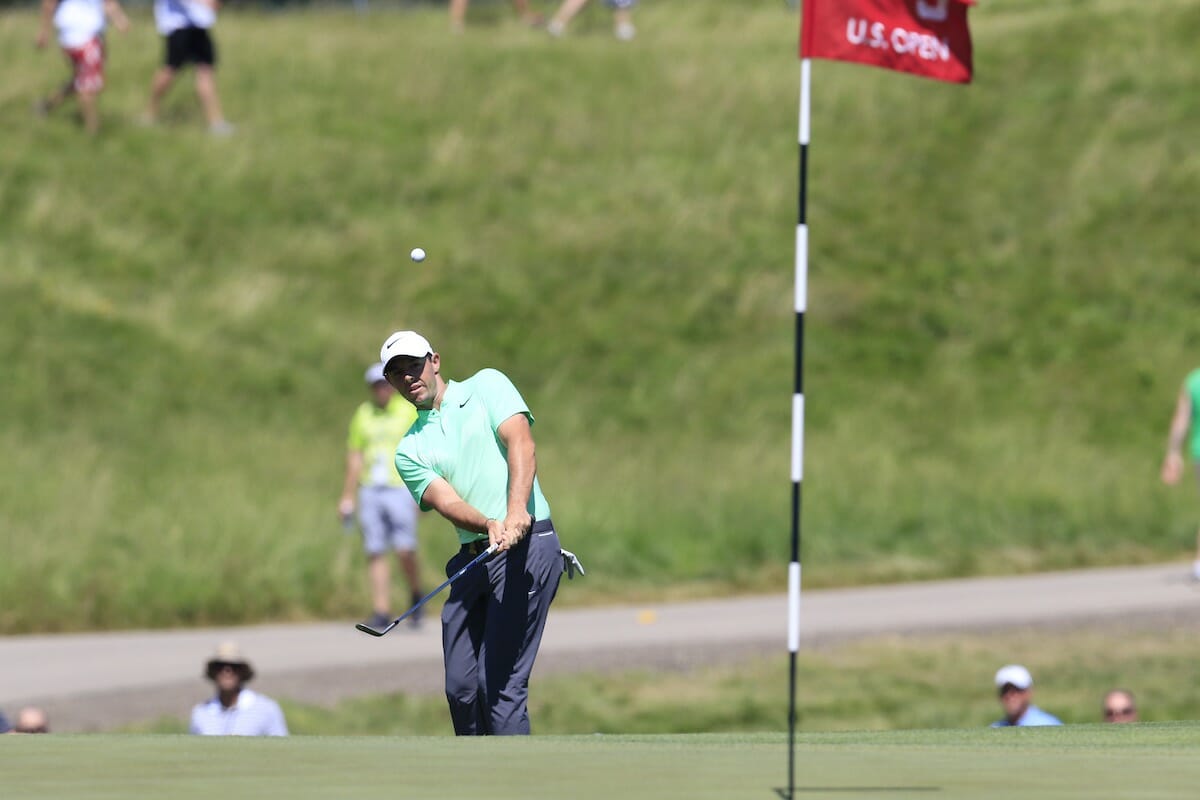 Rory McIlroy defined the term “Army Golf” signing for a 78 and his highest score in a U.S. Open Championship at Erin Hills.

Aside from holing a monster 80-foot eagle putt at the second and where he drove the front edge of the green, McIlroy struggled finding just five of 14 fairways and for the most part was seen marching left, right, left, right about the course on route to a horror six over par tally.

It was the World No. 2’s highest score in 27 rounds of a U.S. Open and a shot more than the 77 he shot on day two in 2010 and also on day one in 2012 while he signed for a 77 a year ago at Oakmont. And on each occasion McIlroy recorded those three earlier 77s he has missed the cut.

McIlroy and the Erin Hills rough were close friends on the opening day and his “rusty” Erin Hills endeavour left him trailing 13 shots behind good friend Rickie Fowler who not only recorded his best score in a U.S.Open but in the process matched the lowest first round to par in a U.S. Open set 37-years ago by Jack Nicklaus and Tom Weiskopf when they shot seven under 63s in 1980 but at Baltursol in New Jersey.

Fellow American Xander Schauffele, ranked a lowly 352nd in the world, had the chance to join Fowler but missed a short putt for birdie on his closing hole in a round of a six-under 66 to finish tied in second with England’s Paul Casey.

McIlroy later attributed his poor showing to “rust” given he has not competed since finishing mid field last month in the Players Championship.

“I hit the fairway on the 10th, and I didn’t hit one on the way in. You cannot play this golf course if you’re not in position off the tee, and I wasn’t in position. Obviously, I paid the price for it today.”

“The good thing was that I felt well and had no concerns.  I feel great and that’s all totally fine. I was hacking around in the rough out there and didn’t feel it one bit. So, no, that’s totally fine.”

“My timing was a little bit off, and that was it. I just hit really bad tee shots which led to obviously not being able to give myself many looks for birdies. So, there is a little bit of rust there.  I started missing some left on the course and tried to sort of correct it on the way in and missed a couple right”.

Shane Lowry had the best finish  of the Irish players as he signed off on a one under par 71.