Former champion Rory McIlroy has given the thumbs up to both the Erin Hills course and any lingering injury concerns ahead of the U.S. Open later this week.

McIlroy has been in Milwaukee since last Friday getting familiar with the course located about a 40-minute drive north-west of downtown Milwaukee.

In fact, McIlroy has been at the course for three days running and is clearly stealing a big march on the majority of his rivals who will start arriving Monday.

“I really like what I have seen as I had heard a lot about Erin Hills in the past,  and I guess for about the last four to five years since we knew the event was coming here, so it definitely lives up to expectations”, he said.

“I got a good look at the course on Friday and then walked it on Saturday and played the course again today. It’s a great golf course and for a U.S. Open venue it is a little more generous than other venues we have seen in the past which is great.”

“It will allow guys to be aggressive and you will be able to hit a lot of drivers around here while you can also be aggressive with your iron shots. It is a little tricky once you are on the greens but overall it is going to be a great test”.

Wisconsin State car licence plates carry the catch line “America’s Dairyland” and to get to Erin Hills you pass by mile after mile of dairy farms along with just as many corn and grain fields. It cannot get any more rural. But Erin Hills also is a massive expanse set out on a large slice of real estate where you could easily squeeze in two to three golf courses. 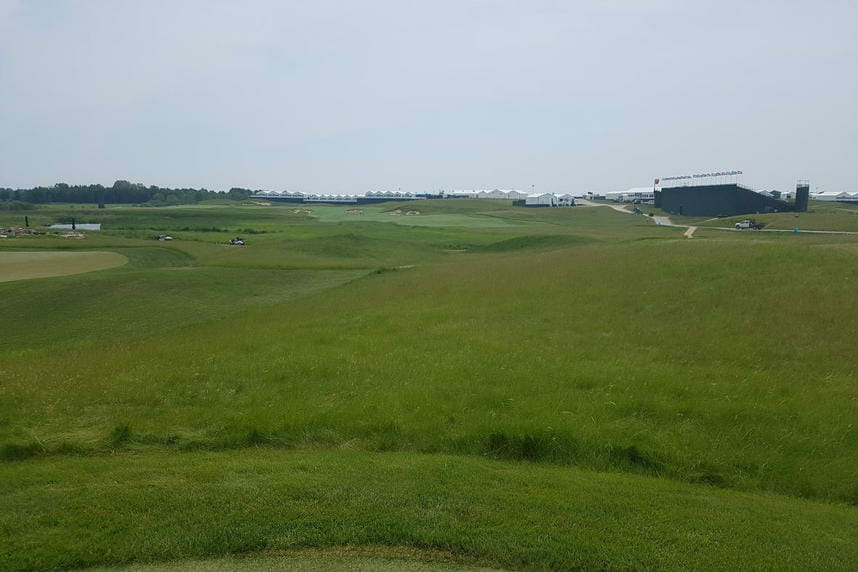 As well, it is open and exposed while there are just five trees on the course so really nowhere to hide it the wind gets up.There are 14 blind shots too, making it even more difficult when it comes to sight line.

“One of the most important things this week is that you are going to have to be really confident knowing exactly where you need to hit your tee shots,” said McIlroy.

“Also, there is a lot of second shots out there that are blind, as well. So, if you can get really comfortable with your sight lines … they say a new golf course is only blind once, so once you have played it you should know where to go”.

McIlroy is returning to competition for a first occasion since being forced out of last month’s BMW PGA Championship with a second rib related injury, and this after a near similar injury earlier this season in his very first event in South Africa. In fact, the current World No. 2 will be contesting only his seventh event of the New Year this week.

“I am feeling really, really good health-wise”, he said. “It has been a frustrating year getting these niggling injuries but I feel like I have figured out what I need to do for it not to reoccur again. So, it is just about managing my practice schedule to not overdo it, and making sure I have plenty of energy to come out on the golf course and just play.”

“So, I am feeling good about being here and excited heading into the week”.