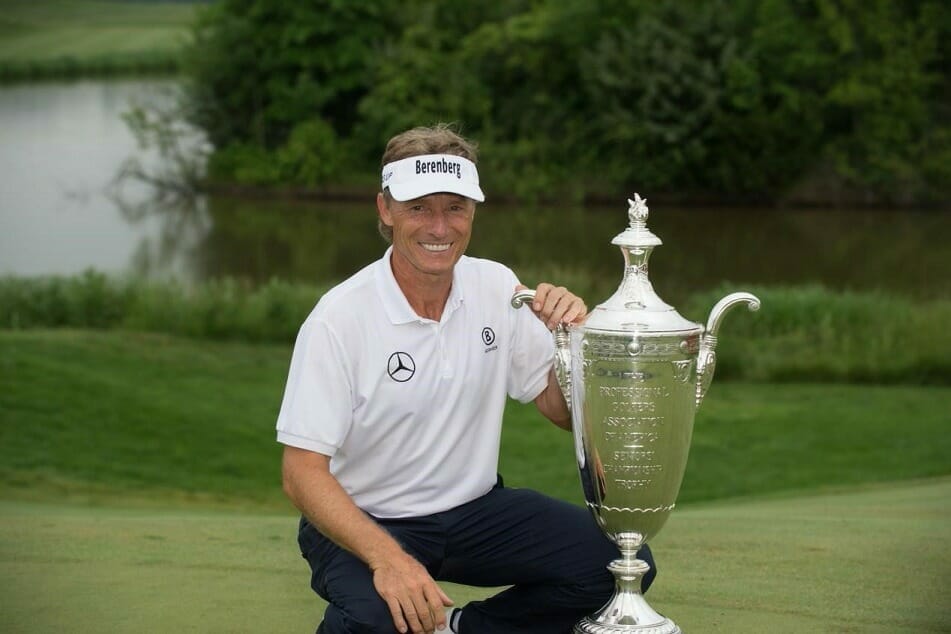 Bernhard Langer made history at the KitchenAid Senior PGA Championship as he became the first golfer to win all five Senior Major Championships in their career.

The two-time Masters Tournament champion went toe-to-toe with fellow Green Jacket winner Vijay Singh in the final round at Trump National Golf Club, and a crucial birdie on the par four 16th hole saw him take a one shot lead with two holes to play.

Singh bogeyed the 17th, giving Langer a two-shot cushion heading down the last and the 59 year old secured his ninth Senior Major Championship victory with par for a total of 18 under.

With this victory, Langer equalled Gary Player’s record of nine Senior Majors, which he set in 1990, just one week after matching Jack Nicklaus’s eight Senior Major titles with his win at the Regions Tradition.

“Coming here I knew my game was in pretty good shape after winning by five shots last week,” said Langer. “But, truly, I didn’t expect to pull it off again and today was a very hard day playing with Vijay.”

“I was fortunate to make a bunch of putts, very important putts, even from 20 feet away and he missed a couple of shorter ones. It was a very tight race all day long until we got to 16 and 17, and then I got my nose in front by two and never looked back.”

Langer started the day one shot behind Singh, who set the pace after 54 holes on 15 under par. Singh increased his lead to two strokes with a birdie on the second, but Langer kept his cool and the lead changed hands when the German birdied the fifth hole for a 16 under par total.

He then bogeyed the sixth hole and nothing separated the two players until Langer birdied the 16th from 12 feet to go ahead. After a bogey on the 17th hole, Singh birdied the last to reduce the deficit to one shot, but Langer holed out from less than two feet for par and an historic ninth Senior Major Championship.

“It means a great deal to win two Majors at age 59,” said Langer. “I’m not sure many people have done that. So I’m excited about where my game is at this point and I’m looking forward to hopefully a couple more good years and then we’ll see where it takes me.”

“I look at exceptional players like Tom Watson, Hale Irwin, Jack Nicklaus, Sam Snead, Bob Charles and Gary Player, those guys have lasted longer than most. I’m trying to be a part of that group, so far I’m doing well, but the future will tell where that goes.”
Speaking after his final round of 70, Singh said: “I missed a lot of putts out there. If I had putted nicely, this thing probably would have been over a long time ago. But Bernhard played really solid, he never missed a shot and he was always on the green, and he putted nicely as well, so he deserved to win.”