Reed leads as McDowell and Lowry lurking at Wells Fargo

With five PGA Tour victories to his name at age 26 it’s not like Patrick Reed has been struggling. Early this season however he was struggling with his putter, he was making cuts but not contending. Then he started missing cuts where he failed to make the weekend rounds three times in April alone. He decided to make a change.

Rather than consulting with his caddie and his trusty green-reading book before every putt—a practice that may soon be outlawed, anyway—Reed decided to go back to the way he did it as a an amateur and trust his instincts. See putt. Hit putt.

“I decided just to be more of a kind of see and react guy rather than being so technical, and having Kessler [Karain, his caddie] in there and looking at the book and trying to get the perfect line,” said Reed, who is averaging 27 putts per round at Eagle Point this week. “Go back to how I putted in college, kind of just see the putt and go knock it in.”

That simple plan paid dividends Saturday as Reed tied the low round of the day. The putter has been his friend as he tries to win for the first time since The Barclays last year, and has helped him get up and down 16 times in 19 chances, best in the field.
Reed will need more of the same today with 18 players within four of the lead. Two of those chasing players lurking within striking distance of the lead are Graeme McDowell and Shane Lowry.

McDowell, who is ranked second for putting this week behind Reed, is just four shots off the lead in a tie for 14th after he carded a 70. Lowry who has struggled with form with the short stick for several months had a great Saturday where he holed all 14 putts he faced inside 10 feet.
Having had 34 putts in a disappointing round one, Lowry had just 25 in round two and only 24 on moving day to leave the Clara man only one shot further back from McDowell and five off the lead.

It was a disappointing day for Seamus Power as he crashed from second to 49th as he returned a 77.
Power lies eight strokes behind leader Patrick Reed ahead of the final round as the Waterford professional hopes to find the form that took him to the top of affairs earlier in the week and post a strong finish. 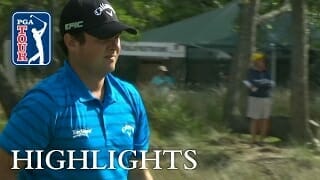