Harrington & Garcia kiss and make up at Rory’s wedding 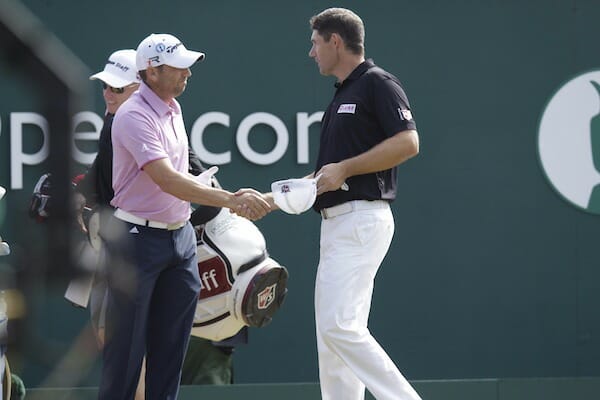 Although no photos have emerged of the happy couple yet, it seems love was in the air at Ashford Castle over the weekend.

Harrington’s remarks on 2FM’s Game On following the Spaniard’s recent Masters victory, when he said Garcia was “a very sore loser” and that the pair had “zero in common”, caused a bit of a storm in the golfing world.

Those remarks quickly got a lot of coverage worldwide and led to a clear the air encounter at McIlroy’s wedding at Ashford Castle last weekend as they both put their differences aside.

“As you would expect with these things, literally the first person I met when I arrived at the wedding was Sergio.  It was something that needed to be addressed and the opportunity came up straightaway,” said Harrington. “It’s amazing how these things work out.  It’s strange how well it’s worked out to be honest.  And he was well aware, which was great.  He had done his homework on everything that had been said and how complimentary I was about, you know the crux of the radio interview was the fact that Sergio had turned the corner and had shown how much he deserved to win the Masters and had shown the emotion on the 18th green, and everybody had to feel for that emotion.  At that moment in time, you could see how he had paid his dues.  That was the crux of the article.  But obviously that’s not what the headline alluded to.”

“Sergio was exceptionally good about it and he already was well informed, which was nice. That he looked into the deal of it and he understood that I was actually saying, wow, hasn’t he served his time and he deserved it, and you could see it, and that’s what he took from it, which was good.  Because that’s the way it was obviously intended.”

“I would say that Sergio and I have never been in a better place than we are now. It’s amazing how sometimes what you think could be a bad thing, has worked out for the better.”

There were reports that the negativity which surrounded Harrington’s comments could harm his chances of one day becoming Ryder Cup captain and getting the support of one of Europe’s biggest stars in Garcia, however the Dubliner rubbished that line of questioning.

“Let’s face it, Sergio loves the Ryder Cup and the first and foremost thing he’d want is to have the best captain,” said Harrington.
Harrington believes Garcia’s love for the tournament and the European team means the Spaniard would back whoever is most suitable disregarding any personal issues.

The Stackstown man added, “Even if we didn’t get things sorted out, Sergio would want the best captain for the job because winning the Ryder Cup means much more to him than any individual differences.”

However, Harrington still aims to make the next team as a player, “There seems to be an opportunity in 2020 for myself, I know Lee Westwood has put his name in the hat and maybe myself and Lee might be in and around who you’d be talking about in 2020, 2022, and then you know, 2020 is a good bit away, but you are starting to see other guys coming into the picture in 2022 anyway and 2024. So it would be a risky strategy for me to push it out that far, no doubt about it.  But I like playing golf.  It will all depend on how I play in the next year and a half, what happens.  But yeah, for now I think I’m a player and can make the team.”