As the saying goes, fail to prepare and prepare to fail. In his third attempt to seal the career grand slam a very cool and calm Rory McIlroy has left no stone un-turned in his green jacket quest.

“I’m feeling good coming into this week and I’ve prepared well over the past ten days. I played 99 holes in two weeks here, so I’ve played the golf course enough, I feel.  I’m ready to go”, said McIlroy.
“I’ve realized that the more I can get comfortable with this golf course, and the Club as a whole the more I can get comfortable in the environment and the surroundings, the better.  So that’s why I came up here just before the Match Play and played 27 holes, and I came up Monday, Tuesday, of last week and played 54 in that two day span”.

“The more I can just play the golf course and almost make it seem like second nature to me, where to hit the balls on the green and where to start putts and know where the pin positions are the more that can become second nature, the better.  That’s why I played a lot of holes and played a lot of matches with just one ball, that’s what we’re doing in the tournament and I thought that was a good way to prepare.”
McIlroy avoided the heavy rain and thunderstorms battering Augusta National this afternoon as he played the back 9 early this morning with Sergio Garcia taking his practice hole tally to 108 before tomorrows opening round. 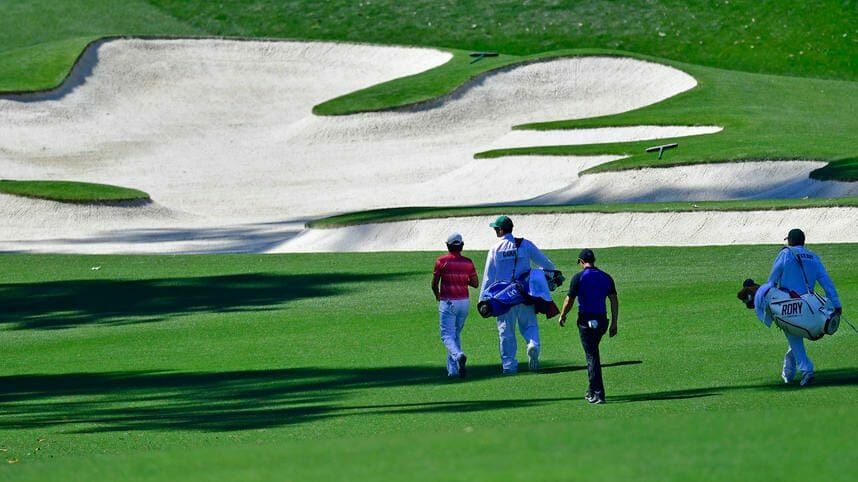 The preparation has led to a late equipment change this week too. McIlroy has been without an equipment contract since the turn of the year after Nike withdrew from manufacturing golf clubs and balls. The Holywood professional had been playing with Callaway Great Big Bertha Epic fairway woods throughout the early part of 2017, but has switched to the 2017 TaylorMade M2 three and five woods after testing over the last couple of weeks.
“I felt with the ball that I’m playing at the minute, it’s quite spinny.  And I needed a couple of fairway woods that didn’t spin quite as much, and I needed a couple of woods that I thought I could turn over easier.  I brought quite a few clubs with me on the trip last week and the M2 seemed to be the ones that work the best for me,” said McIlroy

“It’s a nice position to be in.  You have the freedom to try what’s out there, but again, I feel like what I have in my bag this week will be adequate enough to do the job if I can make good swings with them. It’s just that they fit this golf course a little bit better than the old ones did.”
McIlroy bumped into Jack Nicklaus during testing on the range on Monday and the six time Masters champion offered him some simple advice. “Don’t take on too much”. “He told me he took on too much a couple of times and it cost him a couple of green jackets. It is a golf course that can tempt you.  It can tempt you into doing a little bit too much.”
Rory certainly seems well prepared and tees off tomorrow evening at 18:41 Irish time with Hideto Tanihara and Jon Rahm.