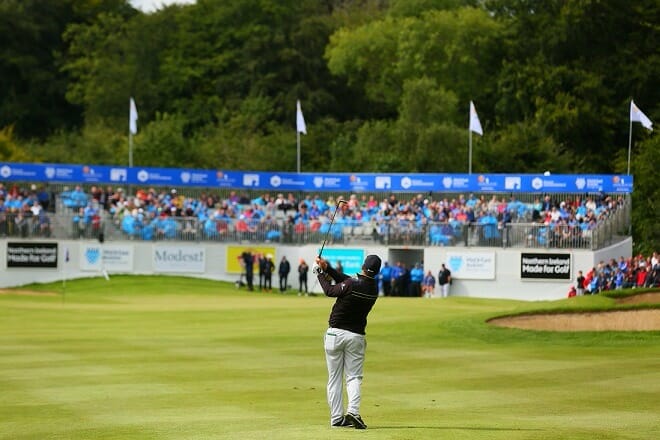 A brand new format and a tournament full of innovation is certain to make the 2017 Northern Ireland Open, presented by Modest! Golf, one of the most talked about events in world golf this year.

The NI Open has embraced the European Tour’s vision of introducing fresh new ideas and innovation to professional golf with the introduction of NI Open Shootout Sunday and IGM are delighted to announce that we are an official media partner with the event.

Continuing the short form matchplay theme from other European Tour events such as this year’s Super 6 in Perth, Australia, the NI Open will produce even greater excitement because the knock-out, stroke play format on the final day will ensure the action continues until the last hole for each of the 28 matches.

Taking place at Galgorm Castle from August 10-13, 156 players tee it up ahead of the traditional 36-hole cut, before a 54-hole cut is then followed by five rounds of six-hole strokeplay matches on Shootout Sunday.

Mark McDonnell: Director of Modest! Golf: said: “We are delighted to return to the NI Open, this time as Presenting Sponsor. We love working alongside the European Challenge Tour and Galgorm Castle and this year is set to be bigger and better than ever before.”

Fellow Modest! Golf Director Niall Horan commented: “We are excited to be returning to the NI Open and introducing a brand new format. Shootout Sunday will be an exciting concept, both for the players and for spectators.”

Interactive and family events will also be on site at Galgorm Castle during the NI Open and one of the province’s sporting highlights will once again have FREE entry for all spectators.

NEW FORMAT EXPLAINED
Round 1: 156 players begin three rounds of strokeplay
Round 2: 36-hole cut following close of play (Top 60 and ties)
Round 3: 54-hole cut following close of play (Top 24) to include play-off if required
NI Open Shootout Sunday: Five rounds of six-hole strokeplay matches
–              The top eight players after 54 holes of strokeplay will receive a bye into the second round of matches and will be seeded.
–              The remaining 16 players (positions 9-24) will be randomly paired for the first round of matches.
–              If there are any ties for 24th position, a sudden-death play-off (18th hole) will determine the qualifiers following the completion of 54 holes.
–              The losing quarter-finalists will contest matches to determine positions 5-8 and the losing semi-finalists will contest a match to determine 3-4.
–              Any matches level after six holes will be determined by playing the 1st hole (rounds one and two) or a shortened version of the 18th hole (quarter finals, semi-finals and final) as a sudden-death play-off hole.