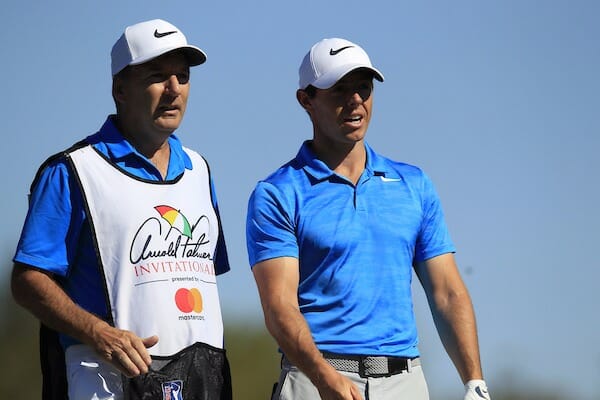 Rory McIlroy as left to rue an ‘overly aggressive’ birdie putt attempt at the last that spoilt hopes of forcing a play-off in the Arnold Palmer Invitational at Bay Hill in Orlando.

McIlroy had been tied for the lead standing on the final tee but walked off with a three-putt bogey in a three under par 69, two shots behind Aussie giant Marc Leishman.

Leishman had come from one behind to be then leading the trio at the front after holing a dramatic 50-foot eagle on the par five 16th and then after two closing pars signed for a 69 to win by a shot at 11-under par from American Kevin Kisner (69) and Charley Hoffman (71) at 10-under par.

As McIlroy strode up the 18th he was thinking of being in a play-off at worst until he heard the huge roar from Leishman’s effort that carried the North Carolina-based Aussie to just his second PGA Tour win.

However, for a second week running it had been a tournament of two very different halves for McIlroy. He had arrived in Orlando having shot two low opening scores in the WGC – Mexico Championship but then slumped with no-frills weekend rounds to finish tied seventh.

Then after disappointing opening rounds of 74 and 71 in suburban Orlando, McIlroy ignited hopes of a first win this year with sizzling weekend scores of 65 and 69. McIlroy grabbed seven birdies over his closing 18 including three in a four hole stretch from the ninth.

But each time McIlroy posted a birdie he seemed to curb his momentum with bogeys at the third, seventh and holes before the disappointment on the 72nd green.

“I thought today that if I could shoot anything in the 60s it would be a good score as I was trying to shoot a couple lower than that but overall I played well and I am really pleased how well I played over the weekend and I can take a lot of positives from it,” he said.

“After seeing Leishman eagle the 16th I knew I needed to birdie the last and I just got overly aggressive on it and missed the one coming back. Look it’s been a good week and if anything, to be one over after two rounds and then come up like this, it’s been a great week and I can’t complain too much.”

“It would have been nice to walk off with the trophy but I gave it a great chance and hopefully, I can get back up on the horse next week at the Match-Play.”

England’s Tyrrell Hatton holed a superb 6-footer for birdie at the last in a round of 71 to join McIlroy sharing fourth place and in the process it secured Hatton his goal of PGA Tour ‘temporary’ membership.

“So, looking forward to the rest of the year now and hopefully can gain status for next year.”.