McGovern finishes best of the Irish in Dubai

After claiming his card for the 2017 European Senior Tour last month Headfort professional Brendan McGovern got his season off to a solid start in Dubai at the Sharjah Senior Golf Masters presented by Shurooq.

At the top Chris Williams secured his second European Senior Tour title after beating Gary Marks in a play-off.
The South African started the day one shot behind compatriot James Kingston but quickly raced into the lead on 14 under par with three birdies and an eagle in the space of four holes from the fourth to the seventh at Sharjah Golf & Shooting Club.

A bogey on the eighth hole saw him drop to 13 under par, where he would remain until the end of his round. Three birdies in succession on the back nine saw Marks draw level and the two parred the final hole, with Williams making a wonderful sand save, leaving just a three-foot putt to force a play-off.

Marks bogeyed the first play-off hole, as Williams, who turns 58 on Monday, holed from six feet to win his first title since the 2011 Aberdeen Brunei Senior Masters.
“I played great the first day and I’m just so excited about winning my second tournament,” he said. “I’m two days short of my 58th birthday and you get to a point where you feel like you’re running out of years and to have won a tournament like this is a shot in the arm.

“I got a bit anxious with my second shot on the last and it went in the bunker. There wasn’t a lot of room to work with, it was a really tight shot but I played it perfectly under the circumstances.
“You can’t put into words how you feel, I’m working just as hard as I was 30 years ago because of the standard on this Tour. I’m so happy to win a tournament again.”
The Senior Tour returned to the United Arab Emirates for the first time since 2000, with the Emirate of Sharjah hosting its first ever professional golf tournament.
“It’s nice to win the first tournament in Sharjah, and I’m very happy to have won again. I hope it’s not another six year until my next win, it’s nice to get off to a start like this and it’s nice to know I’ll be back on the Tour next year with this win too.” 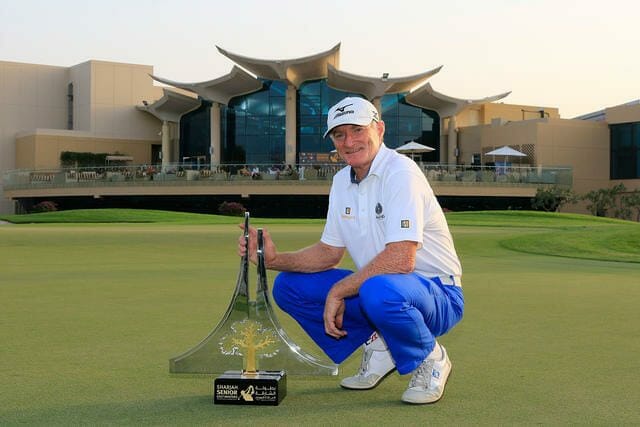 Sharing third place on 12 under par were Senior Tour rising stars Magnus P Atlevi and James Kingston. Atlevi carded the round of the day, a five under par 65, to move one place up the leaderboard after starting the day in fourth.

Two-time Senior Major Champion Roger Chapman rounded out the top five after his three under par round of 69, finishing on a total of ten under par. Reigning John Jacobs Trophy holder Paul Broadhurst, who topped the Senior Tour Order of Merit in 2016, finished sixth on nine under par.

Of the other Irish in the 57 man field Philip Walton finished in a tie for 38th earning € 2,581 with Ronan Rafferty in a tie for 43rd for € 2,104 while Des Smith finished 48th earning € 1,747.
The next main European Senior tour event is not until June 21st at the European Tour Properties Senior Classic in Finland.