Thomas stars with ace but Mickelson gets the Grammy

Exciting new star Justin Thomas leads by one stroke but it was Phil Mickelson who stole the ‘Grammy’ in one of the more bizarre days in recent history on day three of the WGC – Mexico Championship at Mexico City.

Thomas, a back-to-back winner earlier this year, grabbed his first Tour ace at the par three 13th when his 232-yard shot took a huge bounce some 15-feet short of the hole, and bounced as high as the flag stick, to then disappear straight into the cup on route to a five under par 66 and a one stroke lead at 12-under par.

“I actually called it on the tee. To get a first hole-in-one in that manner is pretty cool,” said the World No. 8 ranked Thomas. If Thomas wins it would his fifth PGA Tour victory with all five outside of mainland United States (two wins in Malaysia and two this year in Hawaii).

Then there was Dustin Johnson, in second place shooting a 66 to be at 11-under, had been forced to take a penalty drop when he lost a ball high in a tree some 40-yards short of the green at the 16th. But as Johnson stood over his bogey putt he heard fans calling out his original ball had dropped from the tree.

“I tried to hit it a little thin but it just didn’t get up high enough and it clipped the tree but I thought it would be either in the bunker or up near the green,” said ‘DJ’. “But then when they started singing out they had found it, I just started laughing.”

“Overall I feel like I am playing well, it’s just that I am not putting well.  Though today I felt I made more ‘feel’ putts than I have in the three days combined, so while it was a good start to my round I still missed a few very short ones for birdie.”

The Academy Award though, went to Mickelson, who turned the third round of his 50th WGC into a must watch Mexican adventure and strangely finished with 68 to be tied in third place at 10-under par with Rory McIlroy (70). 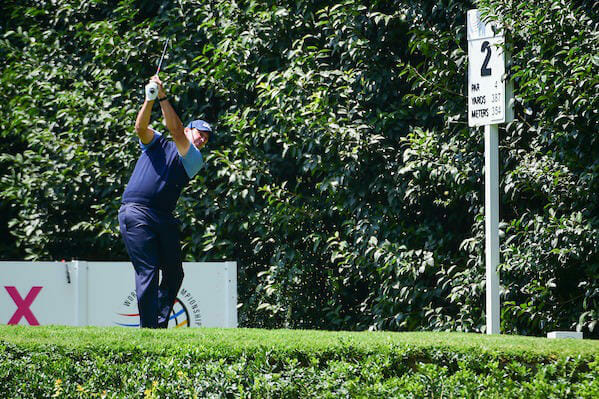 Three times and three holes in a row, Mickelson was afforded a ‘free’ drop. First at the 10th when a spectator stole his ball and then both at the 12th and 13th after sending his drive well into bushes. And when you thought the five-time Major winner would be penalised on both occasions at 12 and 13 he again given a ‘free drop’  by the PGA Tour’s leading referee, ‘Slugger’ White as Mickelson’s stance was affected each time by a sprinkler head hidden in the bushes.

Twice Mickelson saved par but he bogeyed 13th before he put his drive into the tree line left at 14 to then chip out sideways and moments later holed a remarkable 30-foot birdie. He then birdied 15 and made it three in a row when he rolled in a three-footer at the 17th but then missed a six-footer for birdie at the last that would have seen him join Johnson in second place.

“This was a disappointing round for me as I have put a lot of work into my game the last three years and I came out this year feeling pretty good,” he said. “I entered this week playing well and driving the ball well, and I had the opportunity today to show it by being in the last group.  All the hard work I have put into my game and how it has come around, then to have a complete meltdown as I lost all focus on my game for a nine-hole stretch there.”

“Certainly there are positives as I know it’s not that far away and with the help of my coach, I will get it worked out. I thought I showed of heart just trying to stay in it and it could have been a lot worst.  But to play the way I did was very disappointing.”

McIlroy went into day three leading by two but after five holes found himself two behind and never challenged from there on. But then McIlroy could write the final round chapter as victory would take him back to World No. 1 but only if Johnson finished fourth or worse in the $US 9.75m event. And McIlroy, who played alongside Mickelson on day three, revealed he let Mickelson’s misadventure affect his own play.

“I just felt I couldn’t get into any rhythm out there and I didn’t get off to the greatest of starts.  I felt like I got it going a bit around the turn but it was hard to regain that rhythm as Phil was here, there and everywhere, so I was waiting a lot. I probably shouldn’t let affect me but it did a little bit but it just tough to get anything going.”

“I tried hard there coming in to get myself in decent positions and I did, so I need to go out there tomorrow, start aggressively and try and catch-up the guys leading by the ninth, as it looks like it is going to a good shoot-out”.

Russell Knox grabbed a supporting Oscar in achieving the 60th ‘hole out’ for the week in chipping-in from 20-feet for birdie at the 17th but in a continuing roller-coaster score of a 68 for a two-over par tally. The penultimate hole birdie was the 13th of the week for Knox that would have him in the lead were it not for his 11 bogeys and two double bogeys.