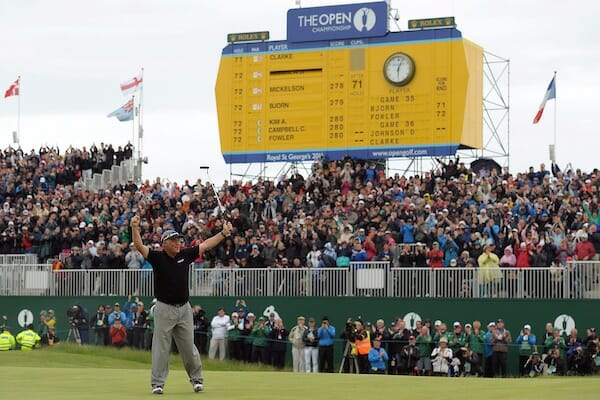 The 149th Open Championship returns to Royal St. Georges where Darren Clarke was victorious in 2011.

For the fifteenth time, one of the world’s great sporting events will return to the south east of England in 2020 when The 149th Open is played at Royal St George’s.

The last time the event was at Royal St George’s in 2011 Darren Clarke showed his mastery of links golf in challenging weather conditions to hold off Americans Phil Mickelson and Dustin Johnson to become Champion Golfer of the Year.

“It was an unbelievable feeling to lift the Claret Jug and know that my name was displayed on the trophy alongside so many of the greatest players ever to play the game,” said Clarke.

“The Open is what it is all about for me as a golfer and it is the championship I always dreamt of winning from when I first took up the game as a kid. I have so many wonderful memories from that week at Sandwich and I will be thrilled to go back there for The Open in three years’ time.”

Martin Slumbers, Chief Executive of The R&A, said, “We are very much looking forward to the return of The Open to Royal St George’s in 2020. The Open is a true celebration of sport and the global spotlight will fall once again on Sandwich.”

“Royal St George’s has produced a series of outstanding Champion Golfers over the last 120 years and it is a thrilling prospect for golf fans to see the greatest players competing on one of the world’s finest links courses.”

James Furber, the Captain of Royal St George’s, said, “We are delighted and honoured to be invited to host The Open in 2020. This is tremendous news for the Club and a wonderful commercial opportunity for Sandwich, Thanet and Kent.”

“The Club is most grateful to all those in the local authorities and the local MP’s who have worked so hard with us over the last few years to bring this about.  We look forward to working with The R&A and others over the next three years to deliver one of the world’s most prestigious championships in 2020.”

Royal St George’s first hosted The Open in 1894 and it was the first occasion on which the Championship was played outside of Scotland. The 35th Open was won by JH Taylor, who became the first English professional to win the Championship.

Over the years, the historic links at Sandwich has seen some of golf’s greatest players lift the Claret Jug including Harry Vardon, Walter Hagen, Henry Cotton, Bobby Locke, Sandy Lyle and Greg Norman, who secured a two-shot victory over Sir Nick Faldo in 1993.

Christian Brodie, Chairman of the South East Local Enterprise Partnership, added, “The Open is one of the country’s iconic sporting events and it’s fantastic news that Royal St George’s will host it again. The Open in 2016 was worth an estimated £110 million to Troon and Scotland and in 2020 it will present us with an opportunity to highlight the economic opportunities for business to invest in East Kent to a global audience.”

Share
Facebook
Twitter
WhatsApp
Linkedin
Email
Print
Previous articleDJ takes over as World No. 1 but just wants to go back to bed
Next articleDes Smyth joins as Leader of Team Ireland Golf