Of his 11 previous 54-hole leads, only twice has Spieth been the solo leader and not gone on to win. Both times, those were one-shot leads heading into Sunday – the 2015 Shell Houston Open and the 2016 Masters. Spieth recorded just 23 putts including 10 on his inward nine shooting his second-consecutive 65 of this week.  “I couldn’t have asked for a better putting day,” he said after his round.
So what was the key ??

“Not getting too frustrated,” he replied. “Recognizing these greens are very tough to putt and from inside 10 feet, there are going to be mistakes that are made. … Staying really patient and staying focused on a goal.”
“Telling myself, ‘Hey, I’m not sure what it’s going to be, it might be 3 under, it might be 4 under tomorrow. But staying really focused on I’m challenging my goal, not looking at anybody else. That’s the toughest part tomorrow.”

Spieth is targeting his ninth PGA Tour title win and his first since last May in capturing the Dean & DeLuca Invitational. And nothing would please the Texan more than just a second victory in his career before the Masters.
“Winning before Augusta is always a goal”
“Getting into a position to win and then being able to close it is a big confidence boost. In the last two years we have won going into Augusta and I feel like it helped me there. So that would be nice.
“Obviously, it being here, first and foremost, would be really special. To be able to say that you won at Pebble Beach on these three magnificent golf courses would be special. Jake and I are going to be grinding as a team tomorrow. We want to win it as a team, too. At this venue, it would be phenomenal.! 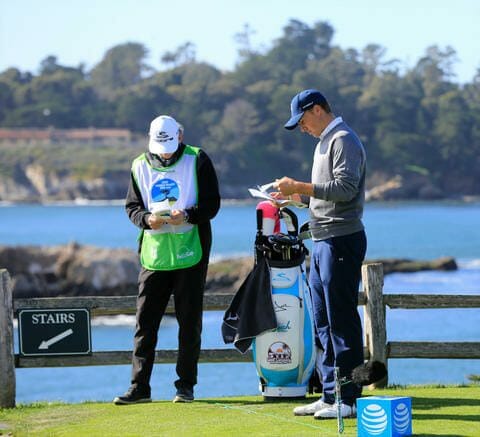 So what does Spieth see as his biggest challenge leading by six ?
“Not getting too frustrated,” he stated.
“Again, there are going to be mistakes that are made. Staying really patient and staying focused on a goal, not looking at anybody else. That’s the toughest part tomorrow.”

Of the Irish Padraig Harrington missed the cut while Shane Lowry (-5) in T16th and Seamus Power (-3) in T34th made the three round cut and will both be targeting a big Sunday finish at Pebble Beach to climb the leaderboard.