Paul McGinley celebrated his first event in the over-50s brigade with a rousing three under par 69 on day one of the Allianz Championship in Florida.

McGinley was grouped with Major’s winning duo of John Daly and David Toms for the event being played on the Boca Raton course about an hour’s drive north of Miami.
His round was rock-solid and included four birdies and just the one bogey in warm and slightly windy conditions, and in field boasting seven Ryder Cup Captains including five European Team leaders from Bernhard Langer in 2004 to McGinley in 2014.

McGinley picked off birdies at his fifth and seventh holes before his only dropped shot at the short par four, 13th. However he bounced back with a birdie at par three 14th and then at the par five 18th.
”I really enjoyed the and it was a good group as David (Toms) played very well and John (Daly) did too ” said McGinley
”The golf course is in immaculate condition and a bit of breeze made it a test. You had to work the ball against the breeze and with the breeze in some instances and it was a good test of golf.
”This is my first of seven or eight invitations so if I can get that number I’ll be delighted this year.
“I am only exempt for the British Open Seniors, which is a real disappointment for me. I thought I might have been exempt for some of the American majors, but it doesn’t look like it”
”But then I also know just how difficult it is to compete and play well out here. So it’s important for me to play well.
”And judging by my first event this week this is a tour with a lot of high caliber players including Jose Maria (Olazabal)  who is good to see back after all his health issues”. 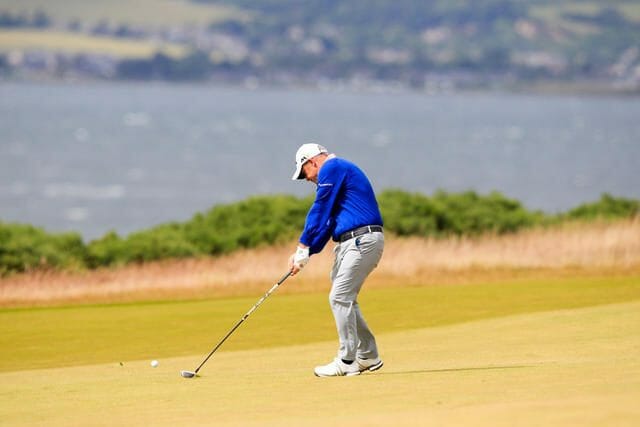 Tom’s, competing in his second Champions Tour event, shot a round of 67 and with Daly also birding the last in a 71.
American Tom Byrun enjoyed the early clubhouse lead in posting a seven under par 65 in the three-round $US 1.75m event.