Tiger Woods immediate playing career is in doubt, including his goal to be in shape for the Masters, after he withdrew from the Dubai Desert Classic.
Woods pulled out of the second round just hours before his intended tee-off and complaining of back spasms.
And while the Woods announcement shocked a record crowd who had gathered at the Emirates Club, the European Tour was in damage control mode when a sand storm mid-afternoon forced a halt to play leaving those who had competed in the morning very annoyed with the move.
It was left to Woods long-time manager, Mark Steinberg to explain Woods withdrawal and suggesting that the news may not be as bad as first thought.
“The good news is Tiger doesn’t think it’s the nerve damage that caused him all the problems last year,” said Steinberg.
“When he came off the course on Thursday he felt okay, and he was fine at dinner that evening.  It was after that he felt his lower back go into spasm. He had treatment then but didn’t really get it worked out.
“Treatment started pretty early this morning and lasted for three-and-a-half hours. While he can move around, he just can’t get the spasm to calm down so he can make a full rotation and play golf.
“He feels terrible for the tournament because he knows the fans wanted to watch him play, and feels terrible for his playing partners, Matt Fitzpatrick and Danny Willett.
“Look, he hasn’t got the strongest back in the world, we all know that, so it’s probably easier for it to go into spasm. I’m no doctor but I know they come and they go.”

“He’s had back spasms before, he’s got his trainer here with him this week, and he hopes in the short term he will be strong, based on the fact it’s not the nerve damage I alluded to.”
Woods competed last November in the Bahamas but it was last week he returned to official competition but then that resulted in missing the cut at Torrey Pines in the Farmers Insurance Open and an event he’s won seven times in the past.
Woods spoke then after missing the cut of his concern in taking a first long-haul flight in some time and the effect that may have on his back, and a back that has undergone three operations in recent times and with the last in September 2015 to remove disc fragment pinching a nerve.
However, Steinberg indicated that was not an issue. 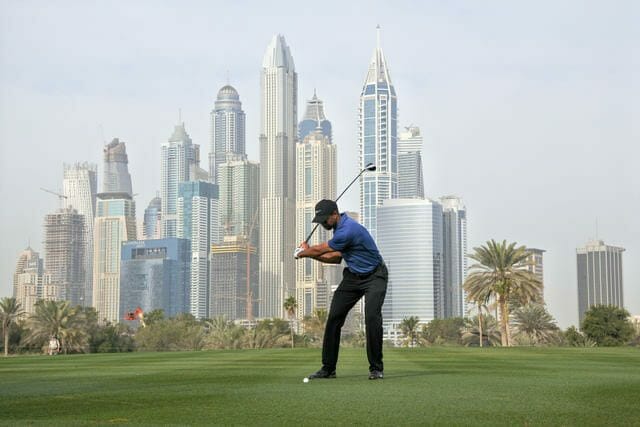 The 14-time Major winner had committed himself to playing four of five weeks and while he is taking next week off, he is due to host the Genesis Open at the Riviera Club in LA next fortnight followed a week later by the Honda Classic close to his residence in Florida.
“He can move around, he can’t make a full rotation on the swing but the fact that he feels as though it’s not the nerve pain, that’s very encouraging for him,” added Steinberg.
“The short-term prognosis is that he hopes he’ll be strong based on the fact that it’s not nerve pain.”

On course, double Major winning Martin Kaymer led a storm of protest when the Tour halted play at 2.25pm local time and then pulled the plug on play for the day an hour later, and with the desert ‘Shamal’ gusting to around 40 mph.
Kaymer was among just four players in the morning, and what he said was conditions no different to the afternoon, to manage to break 70.
He went onto Twitter to voice his disapproval:  “Hard to understand the difference between the morning play and now, therefore even more surprised about the decision.”
Former Masters champion Trevor Immelman described the decision as “ridiculous” due to “half the field playing 36 holes in these conditions”.

Graeme McDowell was among those teeing off in the afternoon but he only managed to play six holes to remain at his starting round score of four under par.
However, Greystones Paul Dunne was virtually blown off the course and out of contention in the morning in carding a 75 to plunge to share of 63rd place at one over par.
And Darren Clarke, who what at three over par, has 10 holes still to play went the round resumes early Saturday morning Dubai time.

South African George Coetzee led the field at nine under par having picked up three shots through his eight holes and with Spain’s Sergio Garcia a stroke back in being one under after his five second round holes.