Hot start for Gmac in first round at Qatar Masters

Graeme McDowell is one shot off the lead on six under par after a blistering start to his 2017 European Tour campaign at the Commercial Bank Qatar Masters.

Starting on the tenth tee, the Northern Irishman opened with three consecutive birdies and picked up three more shots over the next six holes to reach the turn in just 30 shots. He added one more birdie on the second before dropping his only shot of the day on the sixth for a round of 66.

“It was great to get off to a fast start right out of the gates, birdieing the first three holes, and that kind of set the tone for the day. I really felt like I gave myself a lot of chances.” Said McDowell

“We had incredibly benign conditions for Doha. You don’t typically get the wind this calm, and it was nice to take advantage of it this morning. I hit some fairways and hit some really nice iron shots and made some putts.”

“To go out and obviously post a low one this morning was nice to start the proceedings.
I’m very happy with that round this morning. I’d certainly have taken six-under par and stayed at home this morning, no problems.”
Bradley Dredge took advantage of the unusually calm conditions at Doha Golf Club, posting an eight under par opening round of 64 to lead by one shot.
The Welshman has finished runner up seven times since claiming his second European Tour title in 2006, and he shared fourth place in Qatar 12 months ago. 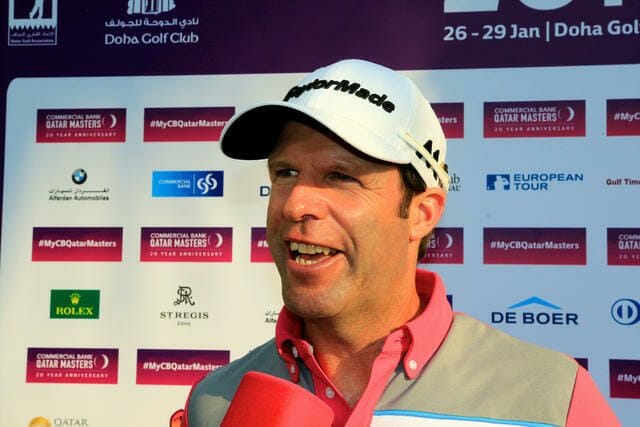 “I’m delighted with the score today. I’m a bit surprised, I thought I was going to hit the ball a bit better off the tee than I did, but I hit a few more fairways. I putted really well, and at the end of the day, I was just compiling a score, and 64 was a good number out there.”

“I have a good history here. I’m not quite comfortable on the greens. It seems as though it’s slightly less grain at the moment on the greens. So for me, the lines were a little bit clearer today. I’m sure you could ask me tomorrow and I’d say I couldn’t see them.”

He is in contention once again after firing eight birdies, including a run of five in seven holes immediately after the turn, to edge clear of Finland’s Mikko Korhonen, who like Dredge also returned a bogey-free scorecard, signing for a round of 65.

Paul Dunne also got off to a fast start carding a four under par 68.
The Greystones man will be keen to make up for last week’s bad final round in Abu Dhabi.