Tommy Fleetwood kept his cool on the back nine to come home in 31 and win his second European Tour title at the Abu Dhabi HSBC Championship.

The Englishman entered the day a shot behind overnight leader Tyrrell Hatton and turned in 36 on a day of tough scoring and gusting winds at Abu Dhabi Golf Club.

A wonderful chip-in eagle on the tenth then sparked his round to life and three further birdies helped him seal a 17 under total and a one-shot win over US Open champion Dustin Johnson and 2014 winner in Abu Dhabi Pablo Larrazábal.

It was a first win in three years and 150 days for the man who turned 26 on Thursday and has finished in the top 50 in the Race to Dubai Rankings presented by Rolex for the past four seasons. It also continued a fine run of form since last season’s Open Championship, with ten top 20 finishes in his last 14 starts including a tie for third in his first event of the new campaign at the UBS Hong Kong Open.

“I thought maybe my second win would come sooner to be honest. It’s been a massive comeback. I made it up to Ian, who has been caddying for me, who is one of my best mates. We made the switch and not a lot of people thought it would work, and we have proved them all wrong. It feels great.”

“On 18 I got a good break. It took me a few drops to get the perfect spot but I just had a go at it. You’ve got to take those chances if you want to win. To be honest, that was easier than the four foot putt to win in the end.”

“I had a really good hard time from July 2015 to July last year where I really struggled with my game. It’s been an awkward curve. The only thing left was let’s get a win, but I kept thinking you keep knocking on the door, it would come. I didn’t really think it would be this week. Just shows a lot can happen in golf.” 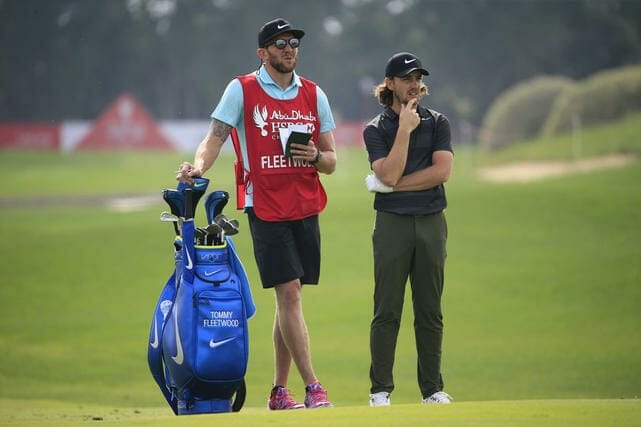 Dustin Johnson finished with an eagle on the last in a closing 68 with Larrazábal signing for the same score after a rollercoaster of a final round.

Austria’s Bernd Wiesberger also signed for a 68 in finishing at 15 under alongside three-time champion Martin Kaymer and Thailand’s Kiradech Aphibarnrat, who had rounds of 69.

It was a very tough day at the office for Paul Dunne. Starting  four shots off the lead  the Greystones professional carded a 77 which included five bogies on the final day after only carding four combined bogies in the previous three days play.