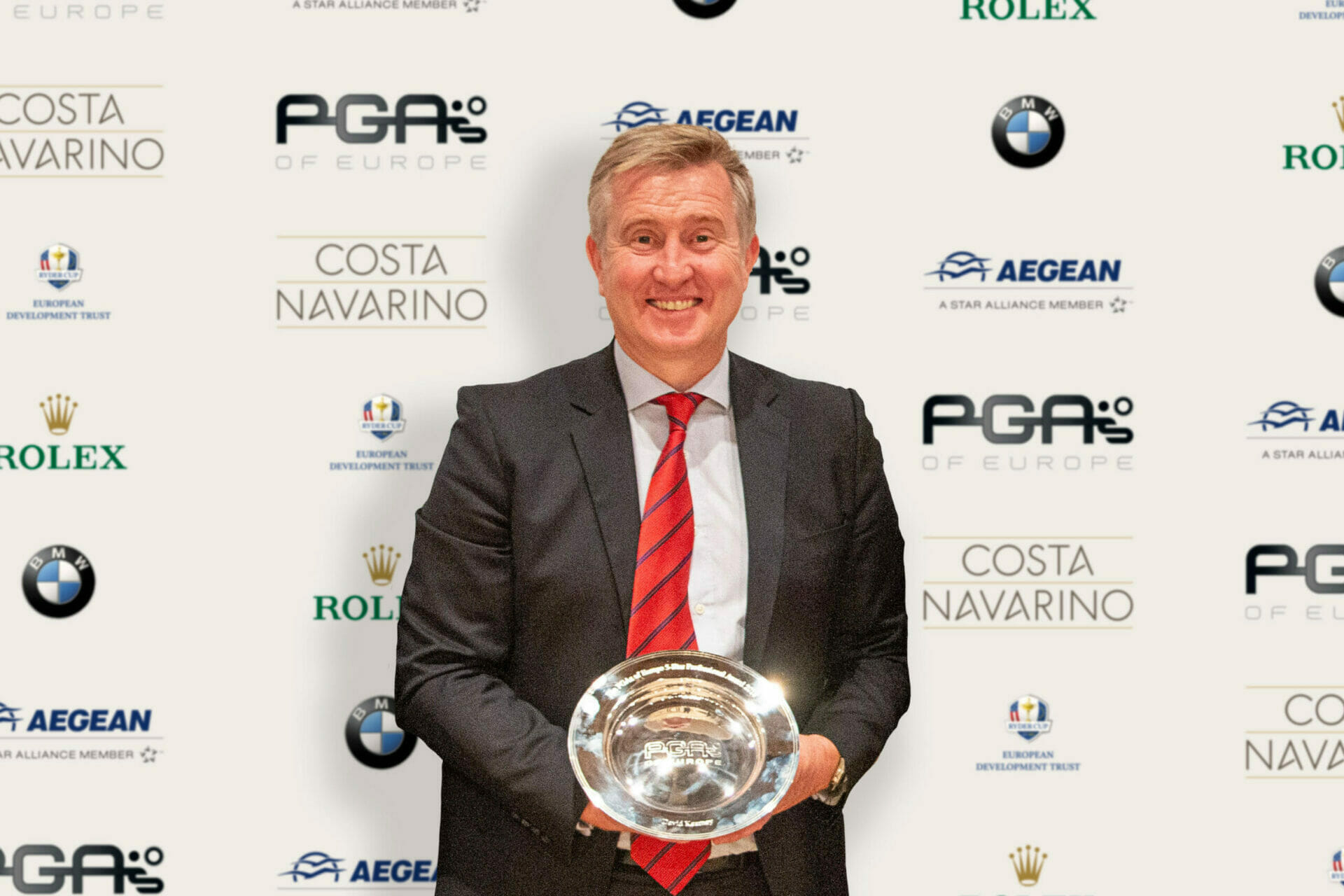 David Kearney has joined an esteemed line of PGA Professionals to have won the PGAs of Europe 5-Star Professional Award in recognition of his work in various areas of golf.

Kearney, who was nominated for the award by the PGA in Ireland, has spent much of his 25 years as a PGA Professional as a keen student of the sport.  He has taken every opportunity to learn from those around him and develop his abilities as a coach, a tutor, and a mentor, and is also a key part of the PGAs of Europe Golf Development Team, utilising these skills around the world.
“It is a big honour…I didn’t expect it…but I am delighted with the award,” said the Irishman after collecting his award at the 2018 Annual Congress Gala Awards Dinner Supported By Rolex at Costa Navarino in Greece.  “It’s been a great lifetime in golf to date and hopefully, touch-wood, I am only half way through it!”

Kearney’s impact on all levels of golfers, both as sportspeople and as individuals, across many different facets of the sport make him a fantastic example of a 5-Star Professional that has shown the highest standards and achievements in his areas of expertise and the activities he has undertaken.
“I had great training and a great professional, Kevan Whitson, at Royal County Down set me up on a good road,” added Kearney.  “Initially to get the support of my mum and dad to go into a profession that might not have been the place for a west-of-Ireland boy to be heading towards, and end up here 20 years later is very fulfilling for all my family.”
Kearney began his golfing career at Claremorris Golf Club in County Mayo on the west coast of Ireland, before moving to the world-famous host of many professional and amateur tournaments, The Royal County Down Golf Club, where he began his PGA apprenticeship under Whitson.

After qualifying as a PGA Professional, he moved to the United States and The Richmond Country Club near San Francisco Bay and the Golden Gate Bridge, where he was able to learn from two renowned teachers in Dr Jim Suttie and Mark Evershed.
Suttie’s own clients of Paul Azinger and Loren Roberts exposed Kearney to the highest levels of the game, whilst one of Canada’s greatest teachers and thinkers in golf, Evershed, was able to mentor him, leading the Irishman to move to Toronto, Canada, to study under him.
His globetrotting continued as he moved on The National Golf Club of Turkey for two years where he worked with local players of all abilities, often in using non-verbal communication to coach when language proved to be a barrier.  He was able to work with local children and local Professionals to help develop many players, some of which are now fully qualified PGA Professionals themselves.