Great Britain and Ireland defeated the USA 16-10 to register back-to-back victories in the PGA Cup for the first time since 1984 at Foxhills Resort, Surrey.

Scotsman Greig Hutcheon holed the match-winning putt after Glasgow’s Chris Currie had staged a stirring recovery to halve the match that retained the trophy.
“It was all about being a team effort, there was no individual glory here,” insisted team captain Albert MacKenzie.
And he was right. Every member of his 10-strong team, vice-captains Cameron Clark and Martyn Thompson and numerous backstage staff, played their parts in what turned out to be a comprehensive victory.

From an Irish perspective, Waterville’s David Higgins and PGA stalwart Damien McGrane both made their presence felt in the Sunday singles. The pair took home a point each, winning their respective matches as GB&I retained the cup with some ease in the end.
That looked an unlikely scenario after the USA won Saturday’s foursomes 3 and 1 to go into the singles a point adrift of their hosts. A close contest looked in the offing, especially as it has ‘previous’ in that respect.
The match at Slaley Hall in England four years ago ended all square and its successor in 2015 at CordeValle, California, resulted in Great Britain and Ireland prevailing by a point.
It was the first time Great Britain and Ireland had won on American soil and, at last, the Llandudno Trophy accompanied the visitors home.
The trophy, which is presented to the winners of the biennial competition, boasts a rich and curious history.

As well as bearing the name of a Welsh seaside town, the silver pot sustained a dent in its lid when dislodged from its perch in rural Dorset by earth tremors caused by an errant bomb dropped by the Germans during World War II.
Fast forward three-quarters of a century or so and it was the Americans who were left reeling after Great Britain and Ireland reprised the 7.5–2.5 singles victory they registered at Slaley Hall.
With the benefit of hindsight, the Americans’ first tee shot executed by Mark Brown was a portent of things to come.
Despite taking an iron for accuracy, Brown’s ball arced its way west towards the driving range. To put the Americans’ demise down to poor play, however, does them and their opponents a disservice.

Robert Coles, Matthew Cort, Andrew Raitt, Phillip Archer, Greig Hutcheon and David Higgins all won their matches, as did Damien McGrane after trailing Brown by two holes.
The comeback kid, however, proved to be Currie. Three down at the turn, Currie went up the 18th a hole to the good after halving the 17th.
His hopes of taking his tally to four wins, a defeat and winning the contest for the hosts were thwarted when his approach felled Coles’ caddy and his par was eclipsed by Rod Perry’s birdie.

Reflecting on his match, Currie said: “Rod’s such a consistent player. He hits the ball very straight, he’s a good iron player and chips and putts great. He was one of the people I thought I could do with avoiding in the singles!
“I was three-down at the turn but got a couple of birdies and managed to put him under pressure coming down the stretch. He made a great par on the last to halve the match, which I thought was the result was the right result. It was certainly a game of two halves and I’ll take that. It was another half point to where we had to be.”

The half point meant, it fell to Hutcheon on the 17th to claim the half point needed for victory and deliver the coup de grace match-wise.
Describing how it unfolded, Hutcheon said: “I hit a great second shot in – one of the best I’ve hit all week but it went too long and I’ve left myself the tricky chip.
“I managed to knock it down. But I’m glad no-one told me it was for the official victory because I might have missed it!
“I managed to roll it in. It is absolutely brilliant. At my age, I’m never going to get in a Ryder Cup team, so it’s absolutely the next best thing.
“As for Albert – he’s been fantastic. He has done all sorts this week. There have been messages, joke presents, team talks. He has been a great captain. It’s a great honour for me coming from the same neck of the week – we’re both Aberdeen fans. To hole the putt that won the Cup is great.

“It has got to be right there with the best. I had a feeling when I saw I was playing seven that it could come down to me.
“But I have been playing with an injury this year. I had left hip problems and you put your body through a lot when you are pounding balls. So I haven’t been playing well.
“Golf is an easy game when it is going well but when it goes bad it is so difficult. I found it hard this week. Albert rested me a couple of times and probably just as well – so I could get that half point.”
In doing so, Hutcheon ensured that, as well as winning the match, the cream of Great Britain and Ireland’s PGA Professionals succeeded where others have failed.
While the Ryder, Solheim and Walker Cups remain in American hands, the Llandudno Trophy stays at home. 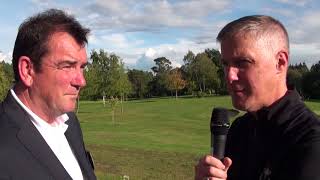 Images and video from the PGA