The duo, currently first and second on the PGA in Ireland Order of Merit, finished the event on four under par, one shot ahead of Brian Doheny (Callan GC), Damien Mooney (Damien Mooney Golf) and Colm Moriarty (Drive Golf Performance Ltd).
Higgins, who has made a habit of winning at links venues this year was one of the early starters and posted an early bogey free 67. The Waterville man got to the turn in one under par 34 and then sprung into action on the back nine as he picked up three more shots with birdies at the 12th, 13th and 16th.

One of the late starters, McGrane made a blistering start and was three under after four holes before a double-bogey at the par three sixth halted his progress. The Kells man hit back with a birdie at the ninth to reach the turn in two under 33 and added two more birdies on the way home to sign for a 67. 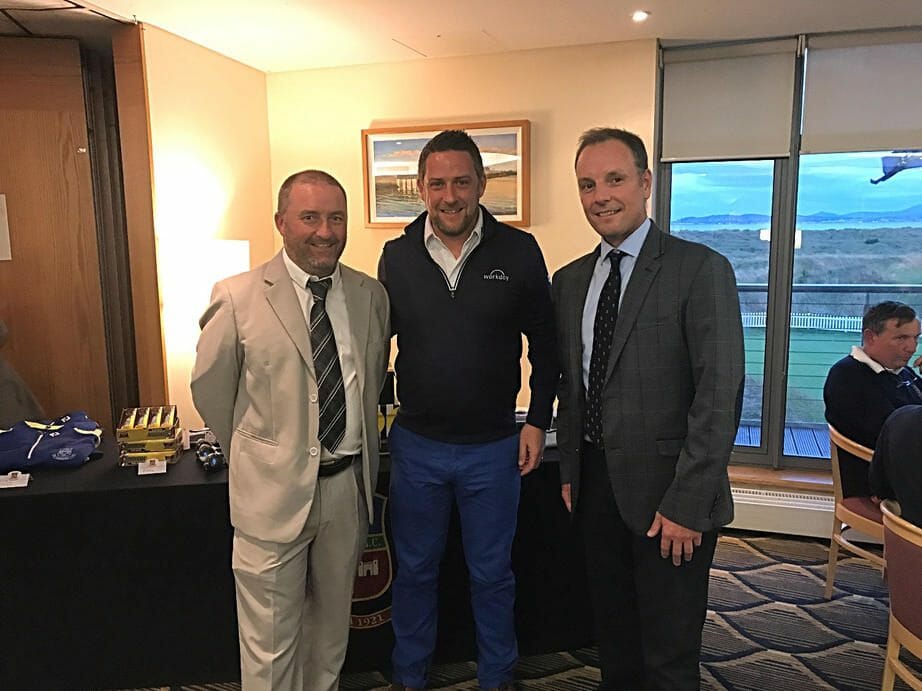 Above – The winners Damien McGrane and David Higgins with Dan Wallace from sponsors Workday. Image by Irish Golfer

McGrane is obviously fond the Bull Island venue after he claimed the opening event of the season as he claimed the BMW Eastern Championship in late April also at St Anne’s.
McGrane has now competed in 20 Pro-Am’s this season and claimed victory in ten of them and holds a commanding lead in the order of merit by just over 6,500 points from Higgins in second place.

The team event was won by professional Damien Mooney and amateurs Dan Glynn, Alan O’Connor and Keith Byrne who finished with 93points.