Kavanagh and McGovern lead the Irish charge at Luttrellstown 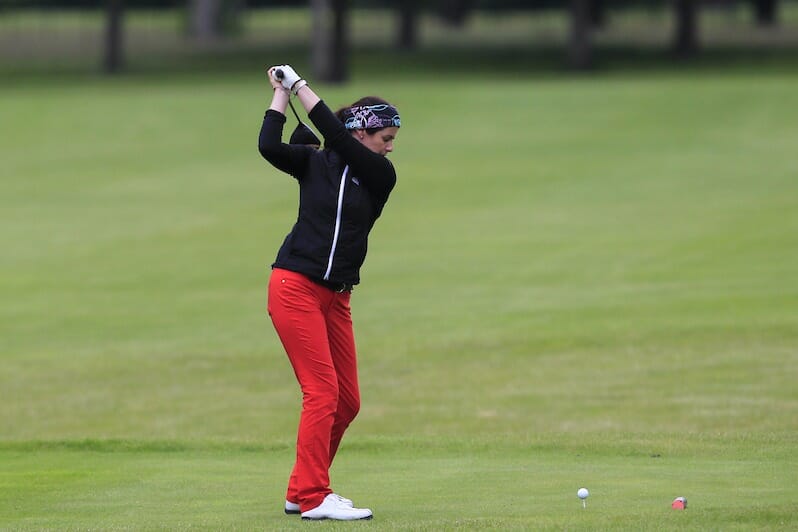 It was a tough scoring day in high winds at Luttrellstown Castle for the opening round of the 2017 Titleist and FootJoy PGA Professional Championship.

Of the 144 qualified players from all regions of the PGA in the UK and Ireland only 10 players broke par with a further ten players carding a level par 72.

There are 18 Irish competitors in the field and Headfort Golf Club’s Brendan McGovern leads the home charge as he posted a -1.

One shot back is Hazel Kavanagh who became the first female to participate in the final of the competition.
A winner on the Irish Region in recent years, there is no question marks over whether Kavanagh can hold her own among the men but the nerves were certainly jangling at The PGA’s flagship event with a £10,000 first prize on offer. But having started on the tenth, those nerves were soon wiped out with an early birdie on the 12th her third hole.

“It’s an unbelievable feeling to become the first female player at this event,” she said. “And I did feel nervous before I teed off because it’s the PGA final.”
“I’ve played in a lot of tournaments in Ireland that very few girls play in, so I’m used to that but because it’s such a big event I was a bit nervous.”
“It’s a tough course and the wind was up but I hung in. I didn’t strike the ball great but I just got round. I putted well and hit the ball much better on the back nine and I picked up two birdies too so I’m happy enough.”

At the top, Jon Bevan, the captain who led Great Britain and Ireland’s PGA Cup team to victory in 2015, boosted his chances of playing in this year’s match by setting the pace at Luttrellstown.

Bevan, who represents Sherborne Golf Club in the UK, ended the first of four negotiations of the lengthy course at Luttrellstown Castle on three-under-par after a round of 69 that included a double bogey on is final hole.
That left him sharing pole position with Paul O’Hara at the head of the 144-strong field chasing the winners cheque.
However, the victor of this year’s tournament could be rewarded with more than money and a trophy. Not least a place in Albert MacKenzie’s PGA Cup team to take on the Americans at Foxhills in September.

That is dependent on the points system in operation to determine which six players from this and last year’s event will book their places in the 10-man line-up.

O’Hara, who finished second in last season’s Scottish Region Order of Merit, seems at home at Luttrellstown Castle.
His round of three-under matched his winning score in the pro-am prior to the tournament and he dispatches the ball a country mile. Which given the course was just shy of 7,100 yards in length is something of a positive.
The Scot is also making his debut in the tournament and hot on his and Bevan’s heels are some seasoned campaigners.

A quintet comprising Chris Gane, Adam Wootton, Christoper Currie, Paul Hendriksen and Andrew Turner are on two-under, with Brendan McGovern, Lee Clarke and Garry Houston are a shot further back.