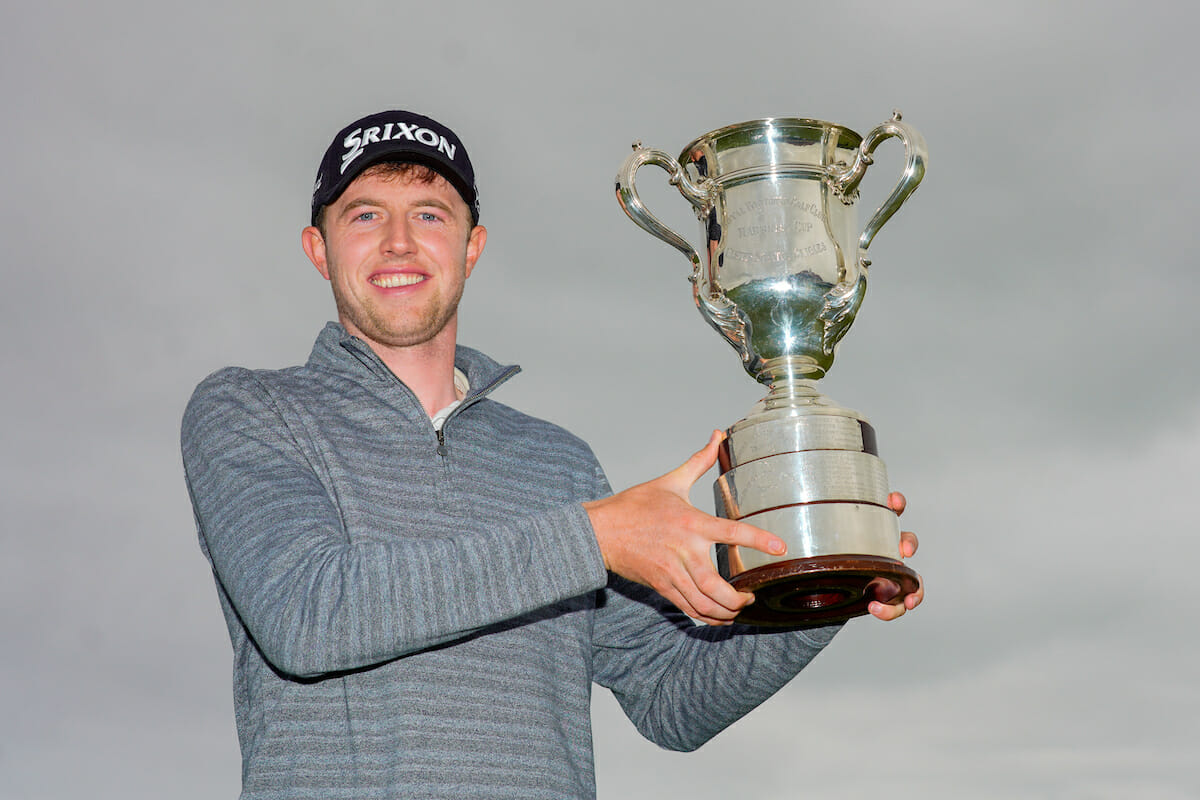 Royal Dublin’s Hugh Foley produced an incredible 36-hole display on the third day of the North of Ireland Amateur Championship to claim a remarkable one-shot victory at Royal Portrush.

The former Irish Close and West of Ireland winner was among the first groups out for the final two rounds but he shot back-to-back rounds of 68 at the Dunluce Links on Friday to set the clubhouse target at seven-under.

And that proved to be enough to claim the trophy as overnight leader Matthew McClean, who started the final day with a four-shot lead could only manage rounds of 73 and 75 to end the day six-under.

It was heartbreak for the Malone ace as he held a share of the lead with four holes to play, only to top a 2-iron off the par-four 17th tee which led to a bogey, and when his birdie putt at the 18th missed, the title was Foley’s.

“Maybe a one per cent chance!” laughed Foley when asked what he felt his chances were of winning when he started his third round.

“I felt like I played really well yesterday so I didn’t give up hope. I was three-under thru nine this morning but then finished only four-under, so I still thought I was too far behind, and then I didn’t think about it at all until I was finished on the 18th.

“I felt pretty sick for the rest of the day! There’s a hill on the range that overlooks 17 and 18 so I watched them putt out on 17 and then ran back and hit a few balls, then watched what I was able to watch.

“I was fully aware of the situation – for the last hour-and-a-half I was refreshing the phone quite a lot, people were texting me updating me, so I had to put the phone away eventually!

“I’m a little bit in shock. I feel like I stole this one.”

After a bogey at his second hole of his third round, five birdies on his way back to the clubhouse led to his first 68, but his most impressive stretch was on his inward nine of his final round, five birdies – including back-to-back to finish – leading to the same score.

With the clubhouse target set, he could only watch on for around an hour-and-a-half as McClean maintained his lead with 18 holes to play after a one-over 73 in his third round to keep him three shots clear of Galway’s Liam Nolan at nine-under-par.

Nolan would fall away as his putting let him down, eventually settling for a share of fourth after a three-over 75 in his final round, but despite also struggling in his final round McClean was holding on at the top at eight-under after 13 holes.

But a bogey after finding a fairway bunker on the 14th dropped him back into a share of the lead with Foley, and then his ill-fated iron off the tee on 17 led to the crucial bogey that snatched the trophy out of his grasp.

The immediate emotion in the aftermath was relief for Foley, who has gone through a tough stretch of results in recent weeks, and he admitted he has had to battle through some golfing demons during that time for the win.

“I had a good start to the year. I was hitting draws and that’s not my usual shot, I’ve always hit fades, but I stuck with that and it was working well up until the Scottish Amateur. Then it started to break down a bit and I hit a real low point in terms of confidence for three or four weeks,” he conceded.

“I had about as many doubts and negative thoughts as anyone could have over the last three weeks. I was really struggling off the tee, which is not my game, I’m usually really strong there. But I just kept pushing them away and tried to reset this week and it worked.

“I went back to fading the ball, and this week I was able to draw it as well as if my body had muscle memory from my first few weeks of the season. That was nice, I had both in my arsenal for the last two rounds.

“I was honest about my lack of confidence, I wasn’t hiding away from it because I knew I was going to have a good week eventually. It’s one of those sports where if you’re doing the right things you’re going to get something.

“I just had a feeling that if it wasn’t here then it would be at Lahinch, which I love as well. Coming to a place you love always gets you back on track.”

It’s another near miss for McClean, who has recorded five top-10s this season including runner-up at the Irish Close, as he heads to Slovakia this week for the St Andrews Trophy as part of the Great Britain & Ireland team.

Athenry’s David Kitt finished with rounds of 73 and 70 to claim third place at four-under-par, with Forrest Little’s Jack McDonnell sharing fourth with Nolan after rounds of 76 and 69 took him to three-under.