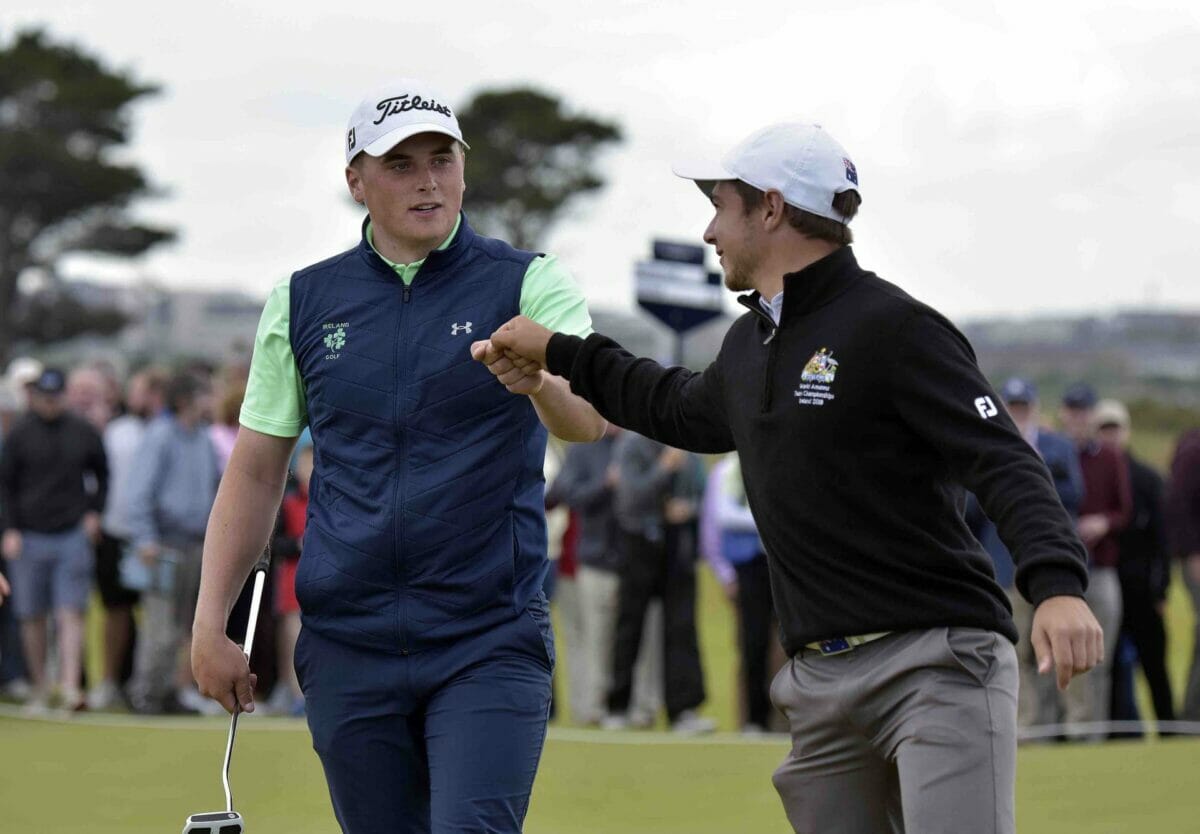 James Sugrue (Mallow) and David Micheluzzi (Australia) during the semi-final of The Amateur Championship at Portmarnock. (Photo: Pat Cashman)

James Sugrue from Mallow Golf Club can claim a special place in Irish golfing history if he defeats Euan Walker of Scotland in the final of The Amateur Championship at Portmarnock tomorrow.

The Championship, first staged in 1885, has only been played in the Republic of Ireland once before – and that was in 1949, also at the world-renowned Portmarnock (Old).

On that occasion Belfast-born Max McCready was the hero. Seventy years later, Sugrue, 22, has an opportunity for a repeat home victory at the North Dublin links following his quarter final win at the 19th against Koen Kouwenwaar of Holland, and a 3&1 verdict over Australia’s David Micheluzzi in the semi-final.

What a contest that was. Hard fought, some great golf, and refreshingly traditional sportsmanship displayed by the players and their caddies – Conor Dowling for Sugrue and fellow Aussie Aidan Didone for Micheluzzi.

Micheluzzi, at 7th in the World Amateur Rankings, was the top seed and highest ranking player in the Championship, but though he had Sugrue shaken at times, the big Corkman was never knocked out of his stride and the huge galleries who turned up for the Friday golf were royally entertained by the golf on offer.

“I have never seen a crowd like that on a golf course, never in my life,” said Sugrue. “It was amazing to be fair, and great experience, and just happy that I didn’t let them all down.”

One up after nine, Sugrue won the 10th and 11th with par to go 3-up. Micheluzzi got one back when his Irish opponent had to concede the  par-5, 13th after finding deep rough off the tee and struggling all the way from there to the green.

They halved 14 in birdies, halved 15 in par, and on 16, Sugrue saved his par for a half with a terrific putt after going through the green with his approach. The match ended on the 17th when the Aussie’s second shot found a greenside bunker, and he failed to get up and down.

Gracious in defeat, Micheluzzi had no complaints. “That was the coolest round I have ever played. It beats the Aussie Open, the Vic Open, Japan Open, all of them. The atmosphere was just unreal. All the Aussie guys supported me so much and even some of the Irish guys.

“They weren’t  booing me or anything for making putts. It was just awesome and I can’t thank everyone enough for coming out. It was a real treat for me,” he said.

Sugrue has his eyes on the big prize but knows he must keep his golf and his thinking very simple, just as he has done all week.

“Nothing is ever guaranteed. You can practice for the whole year and miss the cut in the first tournament and it doesn’t make sense at the best of times.

“I wasn’t expecting to get to the final but I was hoping to have a good week and thankfully it has been so far. Hopefully I can step over the line. It would be nice. You think about it in bed at night. It’s a bit of a cliché but you do.

“We’re talking about an amateur sport, probably the best prize you can win is this, and then get to play in the Open, the Masters. When you say it, it sounds a bit weird but having the chance to do it is great,” he said.

How to get away from the golf? Sugrue and some friends have relaxed by playing a bit of hurling on Portmarnock beach. Unfortunately one the lads had his car broken into on Thursday night at a beach car park close to the golf course. That was bad luck, but at least Sugrue’s clubs were not in it.

Meanwhile, Euan Walker, a Walker Cup squad member and winner this year of the African Amateur Strokeplay Championship at Leopard Creek, poses a clear and present danger to Sugrue’s ambitions.

Walker, from Kilmarnock (Barassie) GC, has steered his way steadily through to the final. He defeated compatriot Sandy Scott at the 19th in the quarter final, and then ousted England’s Ben Jones 2&1 in the semi-final.

Jones had earlier closed out Ireland’s Ronan Mullarney 3&1 to reach the last four.

Ireland’s last winner of the Championship was Alan Dunbar of Rathmore who won the title at Royal Troon in 2012.