Golf4Girls4Life Festival a great success at Royal County Down 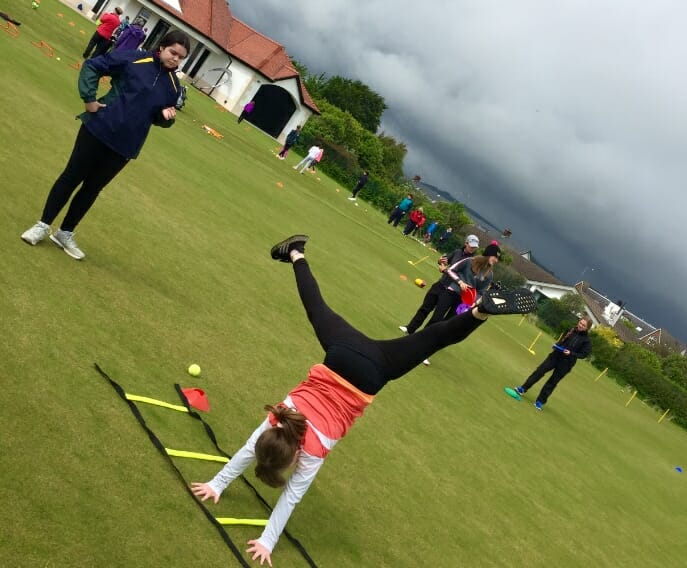 #CantSeeCantBe is the tagline for the 20×20 Campaign and when planning the calendar of events for Golf4Girls4Life this year, CGI Women and Girls Golf Coordinator Maria Dunne felt that Royal County Down would be a perfect opportunity for young girls to see the world’s best players up close.

“We are very fortunate here in Ireland this year to have some many elite events on our shores. A lot of people are excited for The Open at Royal Portrush but having The Women’s Amateur at Royal County Down was something we wanted to make the most of and invite a group of girls to attend.”

CGI Participation Officer Rory Leonard welcomed all and explained that after the activities they had planned, the girls could have a quick picnic, a chat and then meet the semi-final matches as they headed to the back nine.

Past Curtis Cup player and current Junior Vagliano Trophy Captain Dunne firstly led the girls through a number of activities in which basic movement is the goal. Girls were asked to come up with suggestions of how they could move through a ladder or along a rope – cartwheels were overall the choice of movement. Sport specific skills including frisbee and rugby passes were also included.

Next up was long-game where one could attempt to ‘break the window’ by hitting a tinfoil covered hoola-hoop or try your hand at hitting a ball from a baseball tee – much easier than originally thought. All of which was watched over by a PGA Professional who jumped in with some technical pointers as the girls again tried to conquer each challenge.

The putting station included an obstacle course and skittles station but it was the chipping area that generated the most excitement as players sought to do what Rory McIlroy is famous for – pitching into washing machines.

Two hours passed in a flash and it was time for the pre-packed lunches to be eaten before Linn Grant (Sweden), Daniella Barrett (Finland), Amelia Garvey (New Zealand) and eventual Women’s Amateur Champion Emily Toy (England) approached the nearby 11thfairway.

“Did she travel all the way from New Zealand to play here?!” said one girl who was in awe of Garvey choosing to hit an iron off the par-5 12thtee at RCD.

Maybe, one day, that young girl will be a source of inspiration to the next generation of young girls, but if not – she definitely has had an experience which will inspire her to continue the game alongside her friends – now both from her own club and some new ones.