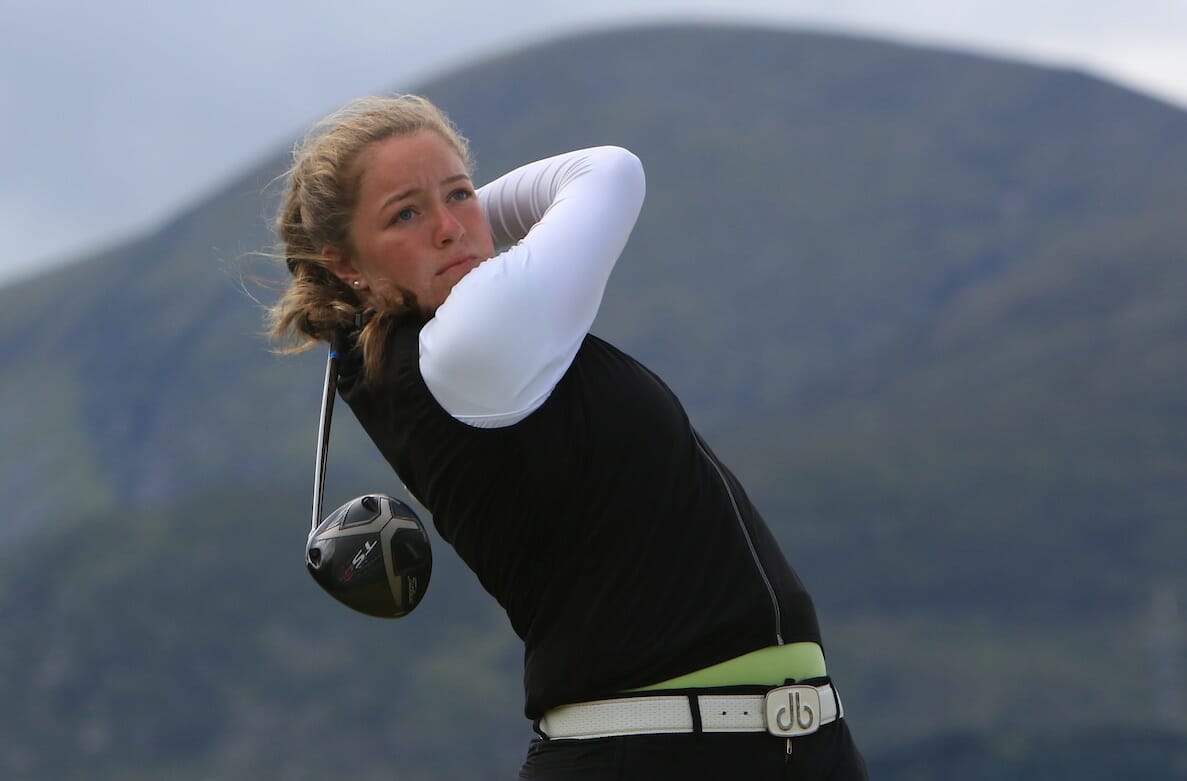 There will be no fairytale Irish champion at Royal County Down at the 116th Women’s amateur Championship as Aine Donegan, Anna Foster and Paula Grant all bowed out of the  at Royal County Down.
Aine Donegan (Lahinch), who originally qualified for the event from the reserve list and shot a 4-under 69 to make the cut to the last 64, overcame Belgian Clarisse Louis in the morning. Louis is ranked 46th in the World and won four times in 2018. Donegan came up against another of the World’s top 100 in Beatrice Wallin (Sweden) in the afternoon, unfortunately losing out on the 15th green.
Zhen Bontan the two-time Netherlands women’s champion beat Irish hope Anna Foster (Elm Park) by two holes in their last-32 tie after Foster had taken out Canadian Noemie Pare earlier in the morning 2&1.
In the penultimate game of the day, Irish hopes ended after Paula Grant (Lisburn) was defeated 2&1 by Amalie Leth-Nissen (Denmark), the youngest player in the field aged 14.
Euphemie Rhodes edged out top qualifier and England team-mate Hannah Screen to seal a place in the last-16. The 17-year-old showed experience beyond her years to defeat Elena Moosman by two holes in the last-64 match play stage before winning at the first extra hole in another close content with Screen.
Rhodes, a member of the England girls’ team, had to change her flight plans home from Northern Ireland as she looks forward to meeting Alessandra Fanali this morning.
Fanali, part of the Italy side that won the team award after two rounds of stroke play qualifying, knocked out Chloe Goady (Scotland) to keep Italian hopes alive after the exit of Angelica Moresco, the runner-up in stroke play qualifying.
On a windy and cold third day on the North East coast that produced a number of other notable results, stroke play qualifying runner-up Moresco was beaten by Min A Yoon from South Korea by two holes.
Equally impressive was the victory from Kiira Riihijärvi over in-form Lily May Humphreys. Humphreys, the winner of the Irish Ladies Open Stoke Play Championship this year, went down to a 3&2 defeat against the Finn.
During the morning’s last-64 ties other high ranked players also lost out. The defending champion Leonie Harm exited after a 5&4 defeat to Linn Grant, the leading player left in the field at 25th in the World Amateur Golf Ranking.
Alessia Nobilio (Italy), the top-ranked player at the start of the championship, also lost out at the first extra hole to Maria Herraez Galvez (Spain), while Fiona Liddell (Scotland) secured a 2&1 win over the reigning Girls Amateur champion, Emma Spitz (Austria).
Liddell and Grant continued their progress in the afternoon, reaching the last-16 with victories over Marie Lund-Hansen (Denmark) and Emilia Tukiainen (Finland) respectively.
The winner after Saturday’s final secures spots at this year’s AIG Women’s British Open at Woburn and the 2019 Evian Championship as well as the 2020 US Women’s Open and the 2020 Augusta National Women’s Amateur Championship.
Entry is free of charge throughout the week for all spectators at Royal County Down, while live scoring, news and video can be followed on The R&A’s website and social media platforms.