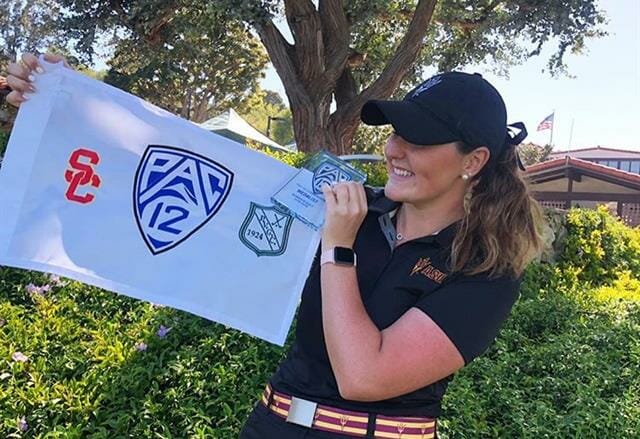 Now a Junior at Arizona State, Mehaffey won the event in a playoff over Albane Valenzuela from Stanford and in the process helped her Sun Devils team to overall fourth place in the tournament.

Mehaffey shot a 4-under 209 (69-70-70) and shot par on on the first playoff hole (18th) in the playoff to top Valenzuela, who made bogey and she was also the only player in the 55-team field to shoot under par in all three rounds.

Trailing by four strokes entering the final round, Mehaffey birdied the 1st and then the 16th to put the pressure on Valenzuela, who was still on the course and returned with a final round 74 which included a run of bogey, double bogey, birdie, and bogey from the 12th that forced the playoff.

“We are thrilled with Olivia winning her first Pac-12 championship,” ASU head coach Missy Farr-Kaye said. “She fought hard all week and it paid off. It is a great accomplishment winning the championship because it is the strongest conference in the country.

“As a team we also finished strong beating two teams that are ranked ahead of us. I love how we played today and I want us to continue our great play and fight when we head to NCAA Regionals in two weeks.”