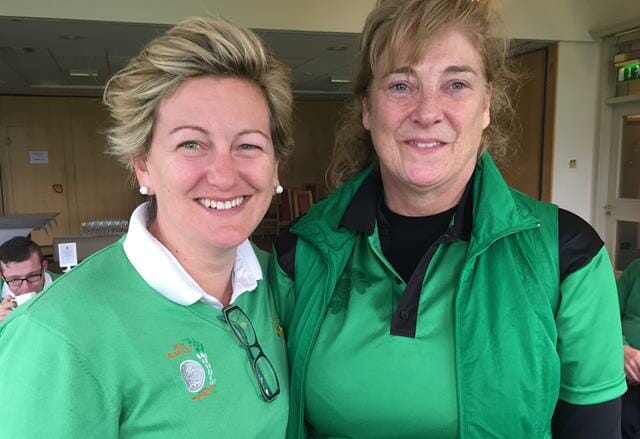 If you ever second-guessed the merits of the famous long walk spoiled, second guess no more as the many benefits of golf to your health are being highlighted from Monday to Friday for Golf & Health Week. Today’s theme is Disability Golf.

For most golfers, difficulties in perfecting their swing far outweigh the worries of being able to see the golf ball, but for Carol Brill, this is one dilemma she has had to overcome.

“Most people can see 180 degrees but I can only see 3 degrees – so my sight is very limited.”

Carol was diagnosed at 21 years of age with Usher Syndrome, a rare genetic disease causing combined sight and hearing loss. She has gradually been losing her sight from a young age and has worn a hearing aid for a large part of her life also.

Four years ago, when her daughter, Sara, was entering first class and would spend an extra hour in school a day, Carol decided she needed to take up something new to fill her time. “I fell into golf almost by accident,” she explained. “I looked up blind sports online and I tried different things like walking, cycling, and I then came across Blind Golf.”

Irish Blind Golf is the national body established to encourage totally blind and visually impaired persons to participate in the game of golf and to encourage former golfers who have suffered loss of vision to renew their interest in the game. They run regular clinics in Leopardstown Golf Range as well as hosting a number of outings a year. The squad consists of 11 men and now Carol makes up the only woman. “Originally I thought golf was for older people,” she admits. “I think that perception came from my Dad, he always used to say, ‘No I’m not retiring yet, I’m too young to play golf!'”

It didn’t take long for this perception to change for Carol. “I felt so welcomed by everyone at my first clinic and outing. I was set back with injury shortly after I started but I was determined that this was something I was going to enjoy.”

And enjoy it she has. Along with the assistance of her Guide, Teresa Schütte, Carol has now contested all over the world – from Italy to Australia. Her travels have produced many memorable moments but one in particular stands out; “Well last week I held a 30ft putt which was amazing!” she laughed, “but winning the Ladies Irish Open last year was a defining moment. I beat the World Champion by 15 strokes!”

Despite her success and the support of Irish Blind Golf, Carol dreamed to have a golf club to call home. “I longed to join a golf club, I just didn’t know how to go about it. Teresa [Guide and Stackstown member] mentioned that the Get into Golf (GIG) was about to begin and that maybe I go and get involved.”

This was the second year of the successful Stackstown GIG programme. For Carol, it has been a game changer for her; “It’s such a positive environment to start golf in. I feel like I am going to come on leaps and bounds now in my golf because of the programme.” She also feels that she has a new group of friends since joining. “It’s just been brilliant. The women behind the programme have been so fantastic, they have been so encouraging and nothing has been a problem. I now want to stay on as a member not just for the golf but for the wonderful camaraderie and support.”

Taking up the game has not been without some anxiety. “Initially going to the club, I was very nervous. I didn’t know whether to declare my sight as you never know what people’s reactions will be. But the fear was unnecessary, I have been absolutely embraced – Mary [Grogan], Teresa and all the other ladies have been so positive and encouraging.

“For me, golf is a physical escape, it’s like doing yoga or meditation. When you’re visually restricted, it can be exhausting, you have to watch where you’re going all the time, but when you’re on a fairway – it’s so liberating. I don’t mind what the weather is – I find it so exhilarating. I just wish I found golf sooner, but I suppose better late than never! I haven’t regretted a day since joining Stackstown, I love it!”