It wasn’t quite the finish she would’ve had in mind but Olivia Mehaffey can look forward to many more occasions in the spotlight after she showed her class at the inaugural Augusta National Women’s Amateur in Georgia.

The Banbridge star and current world amateur number 20 signed off with a disappointing 40 shots on her inward half for a four-over par round of 76 and a plus-five total.

However, when the dust has settled on her Augusta debut, the Arizona State star will undoubtedly look on the experience with great pride after claiming a top-25 finish in a share of 23rd at the history breaking event ahead of next week’s Masters tournament.

Mehaffey managed just one birdie in her closing salvo but after taking advantage of a practice round on Augusta’s hallowed turf on Friday as well as Saturday’s final round, it will be yet another priceless piece of exposure for one of Ireland’s standout talents in the women’s game as she continues her ascent through the amateur ranks of the sport. 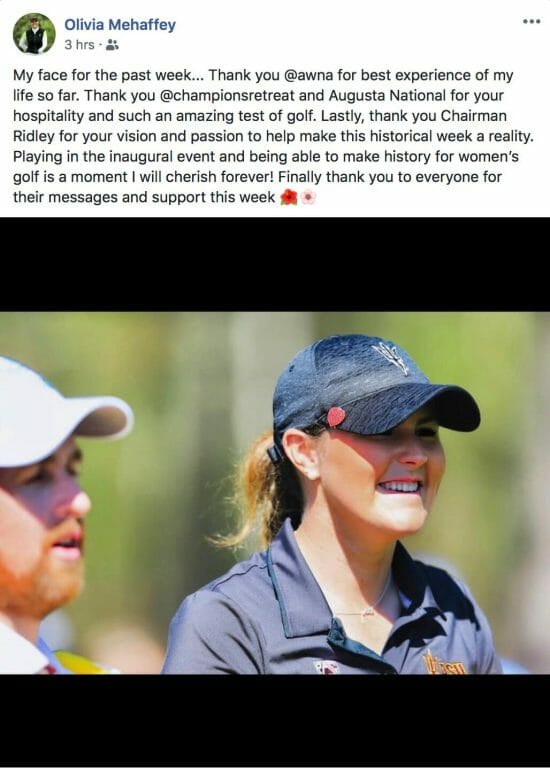 With 72 women making history this week at Augusta, there still had to be one winner and that proved to be Jennifer Kupcho who claimed the first-ever Augusta National Women’s Amateur.

The 21-year-old Wake Forest Senior will end her college career in May with full status on the LPGA Tour’s new Q-Series event and having been steady in the lead since round one on Wednesday at Champion’s Retreat, she took home the silver trophy made in part with Tiffany and Co.

Kupcho, as the winner, will receive an invitation to the next five Augusta National Women’s Amateurs, the 2019 U.S. Women’s Open, the 2019 Women’s British Open, and any USGA, R&A and PGA of America amateur championships for which she is eligible for one year. Let’s hope her success will open the door for many more women to drive down Magnolia Lane in search of fortune.