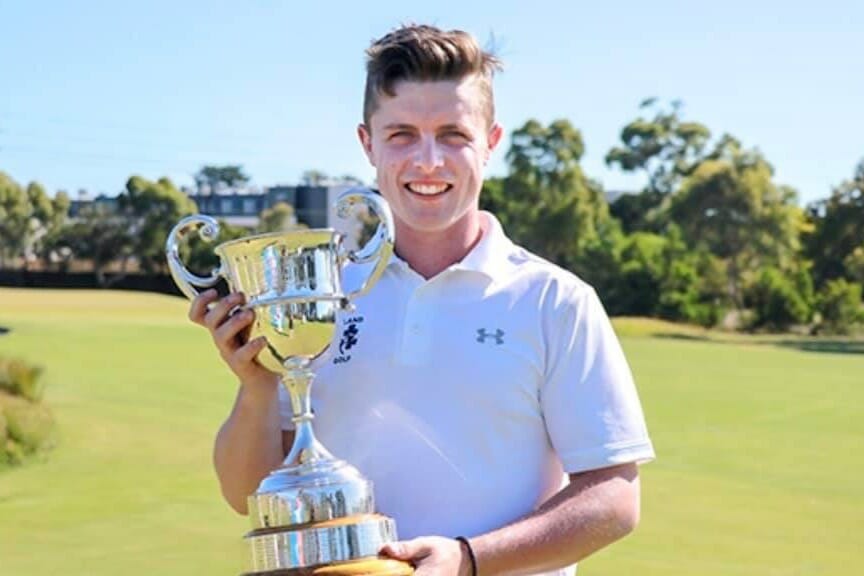 Purcell had a Guinness in hand to kickstart the celebrations but  whether he was in party mode or just trying to calm his nerves after an epic, nail-biting final against Nathan Barbieri was a well kept secret.

The match had ebbed and flowed with some largely wonderful golf on the pristine Woodlands layout, was finally decided on the first extra hole and will be remembered for some superb golf, with 17 birdies between the pair with Barbieri coming back from four down with 10 holes to play to force the playoff.

Barbieri’s fight was typified when, still two down as he walked to the 35th, drilled his tee shot to within 4 feet, then roared as he walked his birdie putt to keep the match alive and the drama intensified when, from the right rough, Purcell’s second to the par-five 36th hole raced across the fairway and up the path next to the clubhouse.

When Purcell couldn’t scramble par it let Barbieri in to tie the match and when he pumped his tee shot down the middle of the 37th it looked as though momentum could carry him home. But Barbieri then tugged a 140 yard approach left and his subsequent bump shot down the hill past the pin simply wouldn’t stop in time for an easy return par attempt.

Meanwhile, Purcell, with composure regained, lagged his birdie putt to kick-in range and was conceded his par while Barbieri missed his to hand victory to the Portmarnock-man.

Purcell was mobbed by a horde of Irish fans who’d come to watch him play, becoming the country’s first Australian Amateur champion in the tournament’s storied 125-year history and as the prize of exemptions into the Australian Open and Vic Open fields – plus the surprise honorary membership later bestowed on him by the host club – became a reality, the humble youngster was still shocked.

“The last few holes were a bit edgy, but to cap it off on the playoff hole was nice,” said Purcell, who had his brother Gary on the bag for the final and later had his trophy presentation played live via Facetime to his parents in Dublin.

“Credit to Nathan, he made a couple of great shots when he needed to today and it was pretty tense that last few minutes.”

“Funnily enough I was more nervous on the first tee this morning than I was going down the playoff hole – I felt quite comfortable still because I’d been playing well all week.”

“He had a putt on ninth (the 27th hole) to go five up on me and I just fought as hard as I could. I couldn’t give any more,” an emotional Barbieri said.

“Fortunately I made a birdie on 17 and 18 was all mine. Then (in the playoff) I hit a good tee shot but just pulled my second and not in the best place.”

“I’m obviously really disappointed, but I’m so proud of myself how I’ve gone this week.”