McKibbin getting used to 'The Next Rory' tag 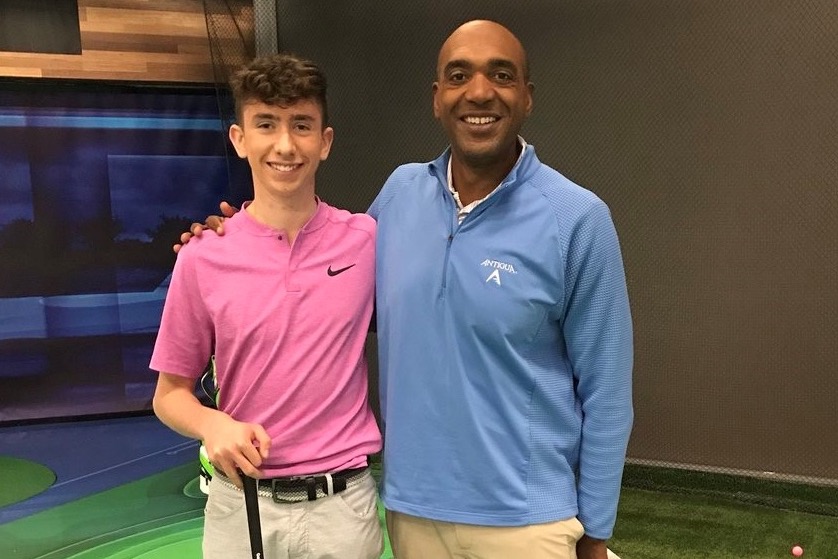 Ultra-talented Irish teenager Tom McKibbin reckons he’s getting used to being dubbed – “The Next Rory McIlroy,” with the 15-year old McKibbin formally introduced to the American golfing public with a ‘stardom-like’ appearance on Saturday on The Golf Channel.

McKibbin was welcomed and interviewed by Damon Hack, a former golf writer with Sports Illustrated who has been with the Golf Channel since 2012 and is currently one of the more-knowledgeable co-hosts on Morning Drive with McKibbin informing Hack he began playing golf at the age of seven when he was out playing soccer with his friends.

“The dad of one of my friends was going up to a driving range and he asked me if I wanted to join them,” said McKibbin. “Ever since that moment I just really wanted to continue playing golf.”

McKibbin, who is now six-feet tall, arrived at the Orlando studios with his golf clubs and Hack had him hit a few shots, but before hitting a first practice ball asked one of those quintessential ‘Americanised’ questions.

“What’s your ‘thought-process’ standing over a shot with a golf club in your haaand (word drawn out),” said Hack.

The Belfast Academy School student, holding his 6-iron, responded:  “Well, just sort be sure my set-up is good and then just focus from there in hitting it straight.”

McKibbin answered: “It’s very, very .. well I can sort of talk to him whenever I want. Rory said he’s always there if I want to contact him to get advice I need and he’s there to help me and make me better.”

“What I’ve learnt from talking with Rory is to continue to keep trying to be myself and just keep on keeping on doing what I am doing, and practice as hard as I can.”

Hack quizzed McKibbin that knowing McIlroy and if being buddies with Rory, leads to any extra pressure and also with McKibbin already being labelled the next ‘Rory McIloy’ and whether that’s a little bit odd?

“Umm, it’s weird sometimes but then I sort of get used to it a bit,” said McKibbin. “I don’t really watch myself walking down the street or anything so it doesn’t really bother me.”

McKibbin stepped-up and hit another 6-iron shot with Hack remarking: “Look at that speeeed.  Woh!  That is perfection.”

McKibbin agreed the best aspect of his game was his driving while his iron play has become a ‘lot better’ but he loves hitting the driver.

But before hitting a shot there was then another double-barrel enquiry from Hack.

“Okay, you’ve got your driver, so let’s see what you’re got with the big club that sets everything up BUT how do you balance your life being travelling the world.  You’re still going to school so how do you make all this work?”

“Aaah, it’s really hard so I just try and get things done early and try and enjoy my golf after that,” said McKibbin. “I try to focus on school, as well which is pretty hard as there is quite a lot of it but I know my school is great, and it’s great they allow me to play golf.”

According to The Golf Channel’s studio ‘Trackman’ McKibbon hit the ball 316-yards with a carry of 303-yards.

“How much do you pay attention to those numbers?  Are you into Trackman and do you do you know your ball-speed, swing-speed and how much are you into the numbers, the data?” Hack asked.

“Uumm, I have been onto Trackman a few times to gauge my swing-speed just to see how fast I can hit it sometimes,” said McKibbin.

“Obviously, I look at carry just to get my distances right but I would not really look at anything else as my main focus is just carry and swing-speed and that is all I really look at.”

Hack then quizzed are you a fader?  Are you drawer?  What’s your natural swing shape?

“I would say I naturally draw it, my game is fine with the draw,” he said.

Hack’s next question:  “Alright, let’s see another swing with the driver.  I mean this is powerful and you’re not even done growing.  What are six feet tall”? “Yes, six feet,” McKibbin confirmed.

Hack remarked: “Fifteen years of age, ladies and gentleman.  That’s a carry of 303-yards and 316-yards.    He’s already played in the Shot Clock Masters on the European Tour.  What was that experience like?  I would have been shaking in my shoes”.

Hack rekindled fond memories of McKibbin grabbing a second-round 6-iron hole-in-one earlier this year in the Nick Faldo hosted Major Champions Invitational and on route to victory on the Orlando course also designed by Faldo in 2002.

The ace was miraculously caught on film.  Click HERE

McKibbIn’s win came on the same weekend McIlroy captured the Arnold Palmer Invitational and  with victory at the Major Champions coming soon after success in the Under-18 Junior Honda Classic and Doral Publix Jnr Classic Orangebowl Championship.

Hack asked McKibbin what the future holds for him and what ‘would you like to accomplish for Tom McKibbin in this wonderful, crazy game of golf?”

“I am going to the University of Florida in a couple of years and I can’t wait for that,” he answered. “Then hopefully turn pro shortly after that.  I can’t wait.”

And in conclusion Hack asked if McKibbin had aspirations also of joining McIlroy in becoming an Open Champion?

“Obviously, that would be a great dream of mine but just to professional golf and to do as good as I possibly could would be beyond wild”.