Kids Golf tournaments open the door to stars of the future 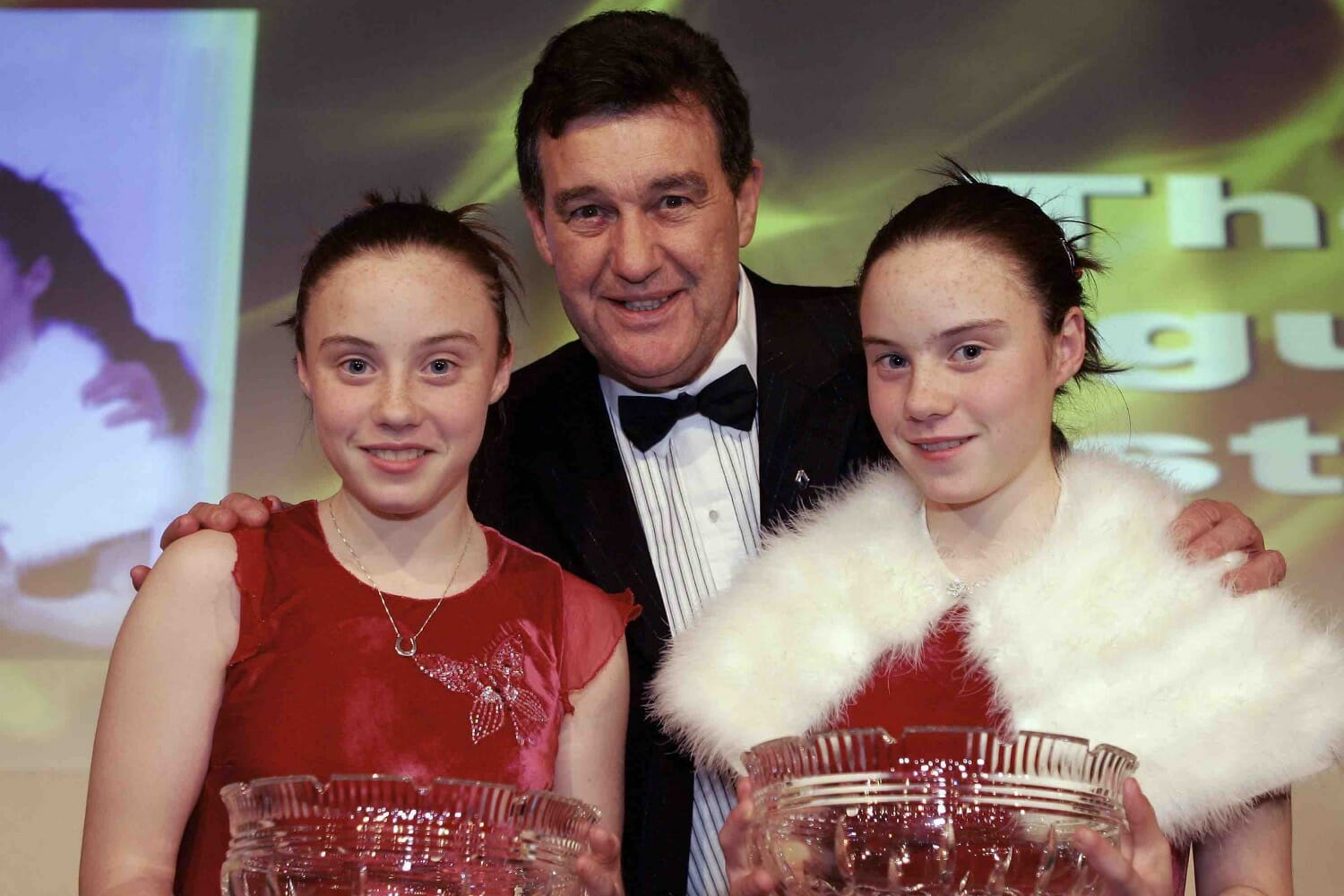 Tiger Woods, Rory McIlroy, Leona and Lisa Maguire – all golf prodigies at a young age, all products of an environment in which they were given every opportunity to hone their innate talent and enthusiasm for the game.

To the outside world, Tiger’s father, Earl, a former Special Forces operative in the Vietnam war, was the architect of his son’s rise to greatness.

Some might say, with the benefit of hindsight, that Earl’s military background and his approach to hardening his young son left deficits in Tiger’s emotional and character development, but when Woods speaks about his childhood, he focuses on the bond between himself and his father.

He always says that the drive to improve and get better essentially came from within himself.  And why not?
When a kid is good at something and he or she is getting praise and affirmation from parents and the outside world, it can spur them on for more of the same.

In the case of Rory and the Maguire twins, the parental roles were fully supportive and crucial to their rise through the junior ranks.
Leona and Lisa have embarked on a new stage of their careers in the professional game, but they and Rory bear the hallmarks of good parenting.

Golf requires single-mindedness , a level of selfishness, and endless hours of dedication to make the grade to the level each of them has already attained.  Despite those inherent requirements of their craft, Rory, Leona and Lisa are all decent, well-mannered, rounded individuals who are a credit to themselves and their family background.

The sport which they have chosen offers wonderful rewards and lifestyle for those who become successful at professional level, which is a key motivating factor for parents the world over to get their offspring into the game.

Getting the balance between parents nurturing their children’s talent, and grinding them into something that is more about the parents than the kids can be difficult. That’s the reason I took a particular interest in the announcement of the USA Junior Ryder Cup team to play Europe at Disneyland Paris ahead of the Ryder Cup proper.

Ever since I saw the Netflix documentary “The Short Game”, produced by Justin Timberlake and Jennifer Beal, featuring six youngsters aged between seven and eight, preparing for and competing at Pinehurst in the 2012 Kids World championships I wondered how they would turn out.

Lo and behold, Alexa Pano, now 14, who was one of the children featured in the film, has emerged as a member of that American Junior Ryder Cup team. The golfer, from Lake Worth, Florida, has an impressive golfing CV, even at this early stage of her career.
She was runner-up in the 2018 US Girls’ Junior Championship and competed in both the 2018 LPGA Thornberry Creek Classic and 2018 Symetra Tour Four Winds Invitational.  Pano is also a two-time Drive, Chip & Putt Championship age group winner, the finals of which are held on the Sunday of Masters week at Augusta National.

Good for her, but fascinating as “The Short Game” was, I have to admit that it evoked mixed feelings.

First, there was a sense of ‘where’s the childhood going” as we saw Allan Kournikova, then aged seven, brother of tennis star Kournikova doing his morning workout with a personal trainer. Obviously money was no object around the house, and young Allan was clearly a motivated and articulate boy.

He wanted to win, he wants to get on the PGA Tour, and he had a clear idea of his main rivals for the prizes in his age category at Pinehurst.
The film highlights the relationships between the children and their parents, catching moments of dramatic tension, interspersed with action on-course, and interviews. 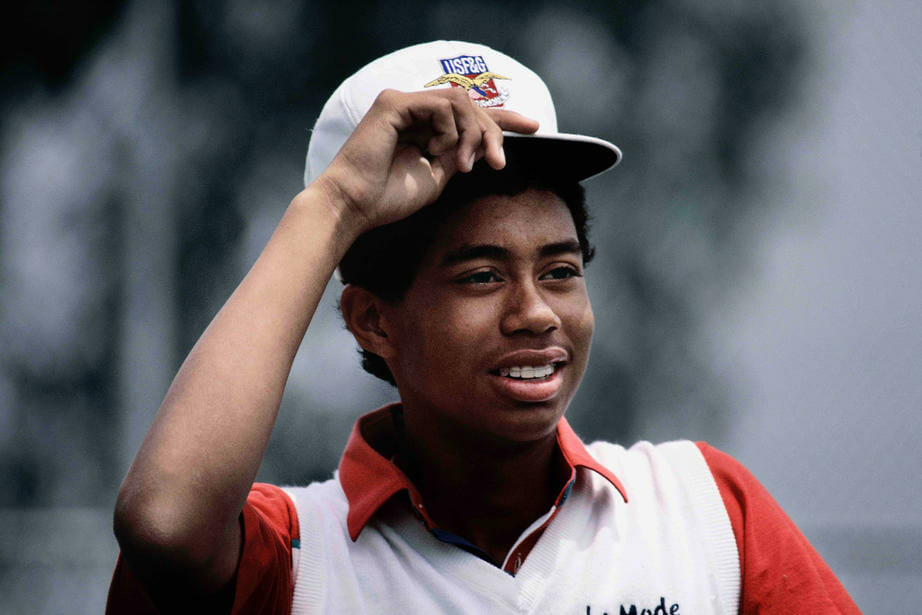 A young Tiger Woods / Image from Getty Images
It felt a bit scary when the father of Amari Avery, one of the competitors, told us that if his daughter wanted to go to college, he couldn’t afford it, so golf was the only way she was going to go to “a nice school” as he put it.  Amari, 14, shares the same birth date, December 30, as Tiger Woods, and the first page of her website – yes, she and sister Alona are the stars of “Avery Girls Golf”  – tells us she is nicknamed “Tigress.”

The sisters’ ambitions are “one day we hope to be the World’s #1 players on the LPGA.”

Ok, then. Watch out world, here they come – and so do many thousands of children worldwide who are taking up competitive golf at a very young age, as the increase in “Kids Golf” tournaments in Ireland, Britain, Europe and the USA clearly illustrates.

The question is: can the parents be supportive and nurturing of their young golfing offspring, or do they get too emotional and overly-involved in pressurizing kids?

Andre Avery, father of Amari, learned some lessons from being portrayed in “The Short Game” and another documentary “State of Play: Trophy Kids” as very intense, to say the least. He is still heavily involved with his two daughters’ golf but told John Strege of Golf Digest earlier this year that he had relaxed his attitude to a large degree, helped by the negative feedback he received after the two films were released in 2013.

“It was depressing for a couple months,” he said. “When you get these negative comments, when you constantly get berated and people on the course look at you funny, ‘that’s the guy cursing at his kid, yelling at his kid,’ it hurts. But it was truthful to a point, right? I finally had to stand back and look at myself and say, ‘that’s how I was.

“I wish I had that platform to talk now. I think I would be a great asset, a voice for people to hear.

“These documentaries that I was in where I was portrayed as this overbearing person, there’s a thousand other people who do the same thing to their kids, and they don’t know it because they haven’t seen themselves on television.”