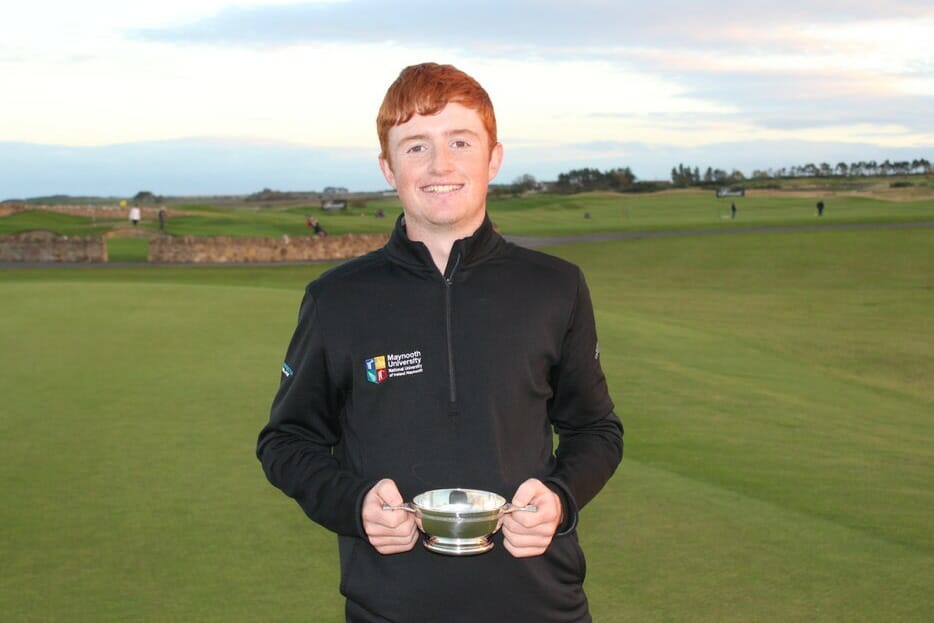 Galway’s Ronan Mullarney dazzles on his way to a successful defence with three timely birdies.

“I love this place!” confessed Mullarney during his winner’s speech at Fairmont Golf Resort, St. Andrews. After making a fearless birdie on the first playoff hole to retain his title in a similar fashion to last year, it’s no wonder Mullarney is fond of the Scottish set-up. A total of ten Maynooth scholars, including myself, travelled to Fairmont in hopes of getting our College season off to a fast start. The three-day tournament including prizes for leading men’s and women’s individual as well as two team prizes after 54 holes of strokeplay.

Caolan Rafferty and Ronan Mullarney were the closest threatening Irish competitors after day 2 when both players finished 36 holes on a -3 total. Tournament leader, James Glenn (USA), finished his opening two rounds on -6, but his three-shot cushion wasn’t enough to protect him from the top class players that were chasing him. Rafferty couldn’t get the putts to drop during his final round and had to settle for third place having finished the tournament on a -3 total. Mullarney, who played alongside Glenn, put the pressure on from the beginning; turning onto back 9 on three under for the day. Glenn managed to hold onto a 4 shot lead until the final grouping came to the short but intimidating par three 17th. An untimely wayward wedge from Glenn ended in a double bogey, which Mullarney took advantage with a courageous birdie in order to create a three-shot swing before heading to the 18th tee.

Both players hit the short par 5 in two, but a three-putt from Glenn and a tap-in birdie from Mullarney meant the tournament was extended to a sudden death playoff. The Galway golfer hit the perfect drive down the first and left himself with an inviting wedge shot to the water-surrounded green. Glenn’s miss left off the tee made for a difficult approach shot, which he did well to place on the front of the green. However, Mullarney’s short game came to the fore when he pitched his second to 12ft and holed the putt; finishing his last three-holes in 3 under.

Mullarney’s abiding determination was both admirable and exciting to watch and his title was well earned. The assured individual champion was also a part of the winning men’s (Maynooth) who finished on a combined -10 to pip home players, Stirling, for the team title.

In the women’s event, Nicola Slater (Stirling), ran away with the title after posting rounds of -7 followed by a -8; giving herself a 12 shot lead before day 3. A slower round on the final day meant Slater signed for a +3 round of 77 to win by 8 shots over her nearest competitor, Penelope Brown (Stirling). Both players were also a part of the winning women’s team from Stirling University who finished the competition on a combined total of 16 under par.

From an Irish stand point, Ciara Casey (Maynooth) posted an impressive round of -3 on day 1, but struggled on the following days. Eleanor Metcalfe (Maynooth) made the most progress up the leaderboard for the Irish over the opening 36 holes. A round of level par on day 1 followed with a -3 round during the second 18 earned the Bettystown golfer a spot in the final group. A disappointing final round from Metcalfe meant she slipped back down the leaderboard to finish in tied 8th place for the championship.

Stirling University went above and beyond for the competing field and it was a very well run tournament on a stunning course. The tournament was organised in conjunction with the BUCS golf tour which Maynooth will participate in again over the next coming weeks.