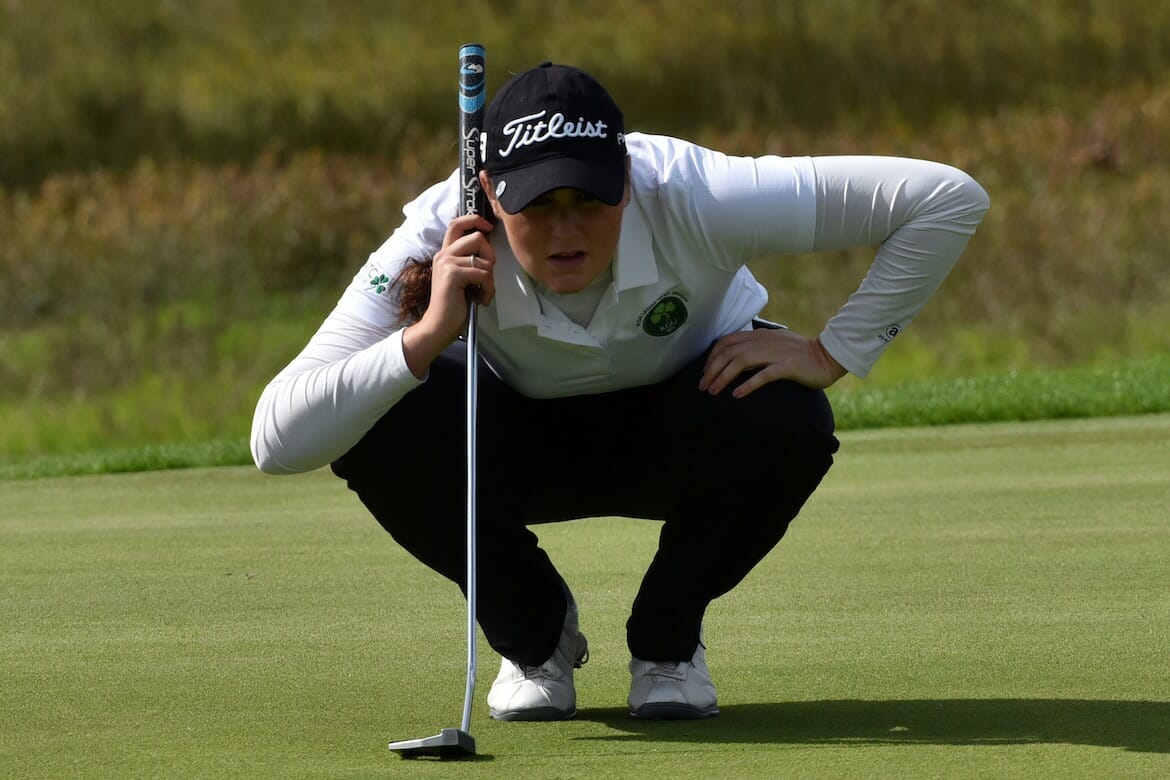 Ireland’s ladies enjoyed a bright start to the World Amateur Team Championship at Carton House, posting a total of three under par in the opening round to keep within one shot of the medal positions.

Olivia Mehaffey spearheaded the home challenge with a round of 70 (-2) on the demanding Montgomerie Course and combined with Annabel Wilson’s total of 71 (-1), Ireland hold a healthy position behind leaders Japan, who are two clear at the top on eight under.

At two under, Mehaffey is tied eighth in the individual standings, five behind the pacesetter, Yuka Yasuda from Japan. Yasuda finished with back-to-back birdies to complete a bogey-free round of 65 on the Montgomerie. China’s Mohan Du was the long-time leader on six under after the 16-year-old carded eight birdies in a round of 67 on the O’Meara Course.

Japan lead the team event by two shots from China while defending champions Korea tied for third with Austria and Germany on four under. Ireland share sixth place with Australia.
Fog lingered over the Carton estate at daybreak but it cleared in time for Ireland number one Mehaffey to strike the first shot of the championship, on schedule, at 7.45am. Ireland played alongside the United States and defending champions Republic of Korea, who proved best of the trio finishing the day four under.

Mehaffey was best of the Irish though her round began with a bogey. She managed to recover that dropped shot at the third by holing her pitch.
“I wasn’t really happy with how my swing felt and then I thought there was going to be a fog delay but then there wasn’t,” Mehaffey explained. “On three, I hit a terrible shot. I missed it where I shouldn’t have and then it went in… That gave me a wee bit more momentum. I felt a wee bit more relaxed, from being one over to being even. I pushed on from there and didn’t look back.”

Assured by that birdie following a nervous start, Mehaffey moved into red figures at the sixth where she converted a five footer having clipped it close with her 54-degree wedge from 84 yards. Driver, three-wood approach to the par-5 eighth set up her next gain, a tap-in putt after her chip lipped the cup.

At the short 13th, another dainty wedge shot, this time with a 58-degree from 67 yards, left her inside a foot. Her only blemish on the back nine came at the 15th, where she paid the price for finding thick rough off the tee.
Gutsy par-saves at 16 and 18, where she holed out from 10 feet, left Mehaffey upbeat.
“I fought pretty hard out there and made a couple of really good up and downs coming in,” she reflected. “I didn’t have to do too much for some of my birdies. I had a chip in on three so that kind of got me going. Just a couple of things that I need to work on and looking forward to tomorrow.”

It was a similar story for Annabel Wilson, who made the most of some scrappy play to post.
“My iron play was very solid, gave myself a lot of chances within 15 feet the whole way through the round,” said Wilson. “Off the tee I struggled all day. I was playing with what I got and just kind of trying to poke them onto the fairway because some of them were wild.”
Wilson bogeyed the second after finding a fairway bunker but like Mehaffey, made birdies at the sixth and the eighth to reach the turn one under. Back to level following a bogey on 13, Wilson birdied 15 and parred her way home for 71.
While Wilson was dismayed with her driving, Paula Grant bemoaned approach play in a 74 that promised much more with four birdies on the card.
“I played solid enough, just a few silly mistakes here and there,” said Grant. “I made a few nice birdies and it’s just trying to get rid of those bogeys. I hit my driver quite well, which is good to see and then I think I just need to sharpen up 120 yards and in.”

Now 24, Grant is playing in her second world championship having previously represented Ireland in Japan four years ago. Mehaffey and Wilson, both members of the bronze-winning team from Mexico in 2016, also have the benefit of experience. Team captain Danielle McVeigh is pleased with she’s seen so far.
“I think we were playing the tougher course [Montgomerie] to start,” said McVeigh. “The girls stayed very patient out there. The course threw a lot of challenges at them so I think that really paid dividends, especially coming up the back nine. They really ground it out well.”

Ireland resume competition on the O’Meara course tomorrow with a 10.45am start. Again, they will be accompanied by the US and Korea though this time they know where they stand against the rest of the field with China the team to catch.

“I have full faith in the girls managing their own games,” said captain McVeigh. “They know what they’re doing. I completely trust them to go out and do it.”
Same job just a different course for Ireland on day two.