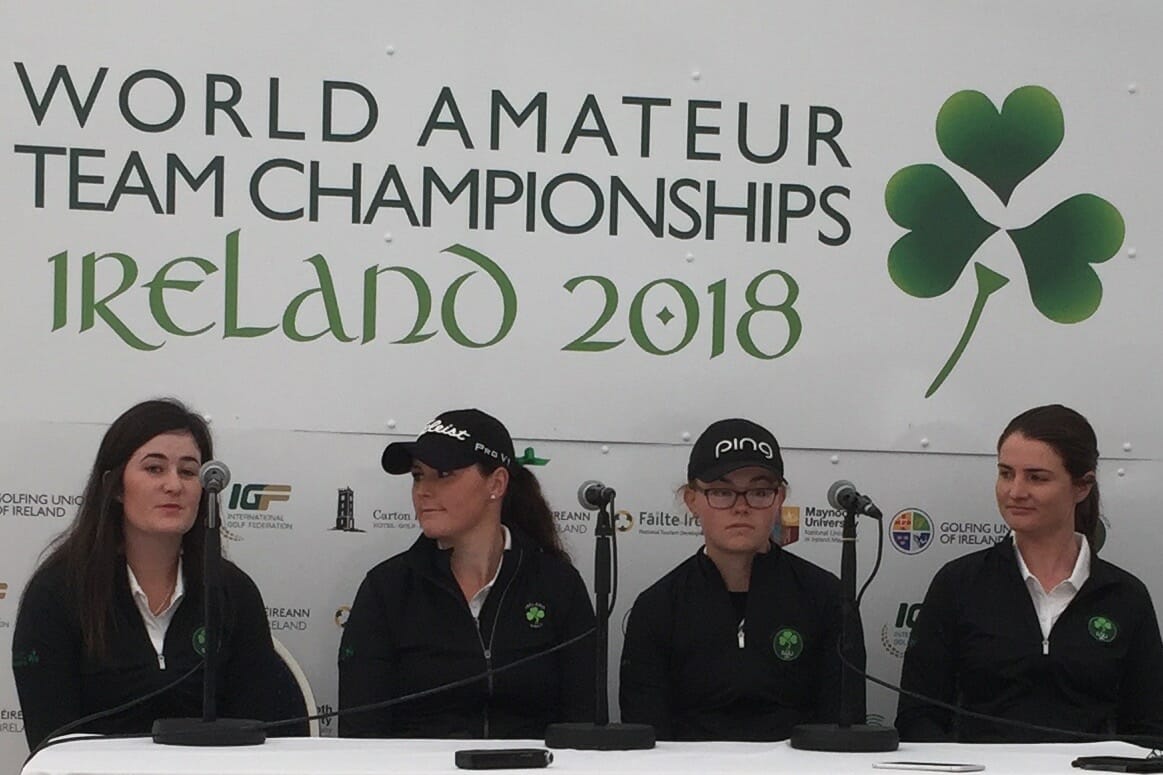 The best amateur golfers in the world have arrived at Carton House, each one primed for action as the eagerly-awaited World Amateur Team Championships finally get underway at the Maynooth venue.

This year is the first staging of the iconic event in Ireland; a championship that was first played at the home of golf at St. Andrews in 1958. Now, 60 years later, the spectacular 36-hole resort at Carton House will provide the perfect setting for the rising stars of golf to do battle once more.

Up first are the ladies as they chase the Espirito Santo prize. Having secured a bronze medal two years ago in Mexico, the Irish trio of Olivia Mehaffey, Annabel Wilson and Paula Grant are particularly relishing the prospect of challenging for a World Title back on home soil.
With that podium finish still clear in her mind, World Amateur Number 21, Mehaffey is focused on repeating that success and if experience holds the key, Ireland can be confident of unlocking that medal drawer again.

Mehaffey has completed two years at Arizona State University since claiming that bronze medal in Mexico, winning the NCAA Division 1 Championships in her first season Stateside. Her graph continues to climb and appearances at this year’s US Women’s Open and the Ricoh Women’s British Open have only added to the confidence of the Banbridge prospect ahead of this week’s assignment.
“When I played the last Worlds [2016] I had just started university so there was a lot of parts of my game that I wasn’t really happy with,” reflected Mehaffey.
“I’d say I’m probably hitting it 20 yards further now, I’m striking it better. I feel like I’m a completely different player. I think I’ve really moved my game along and am happy with the improvements I’ve made since the last World Championship.”

Indeed her development shows no signs of slowing down but it’s the opportunity to achieve something truly special on home turf that has the Arizona State star especially excited for this Maynooth mission.
“Being in Ireland, it would be amazing to win a medal,” added Mehaffey. “Winning a bronze two years ago in Mexico, I know what that feeling is like.

“I remember the last day we wanted a medal so bad. We were fourth or fifth and there were quite a few teams in the running. Even down the stretch I love being under pressure and I remember 16, I had 50 foot for birdie and I holed it. Then I stiffed it on 17 and Leona [Maguire] held a really good putt on 18. Having memories like that coming back from that week is definitely huge.”
And Mehaffey won’t be the only one calling on such fond experiences because Lurgan teenager, Annabel Wilson, was also part of that bronze-medal win in Mexico at just 15 years of age.

Still shy of her 18th birthday, Wilson has already amassed a major haul of prizes for one so young. A win at the French U18 Championship in 2017 was followed by third-place finishes at the Scottish Women’s Stroke Play Championship and the Irish Girls Open Stroke Play Championship.
This season she has enjoyed top 15s at the Portuguese Amateur and the Faldo Series International Finals as well as progressing to the last-32 at the Ladies British Amateur Championship. In the process Wilson broke into the world’s top-100 and she managed all this while undertaking her GCSEs.

And yet despite all that’s happened since, she still regards the World Championships of two years ago as the major learning curve of her career to date as she enters familiar territory through the gates of Carton Domain this week.
“The Worlds two years ago was the highest level I had ever competed at,” recalled Wilson. “I learned so much playing with the top ladies in the world. I think I took a lot from that and I said to myself, this is what is needed to perform.”

Now that bit older, Wilson will have some familiar faces spurring her on from the side of the fairways in the hope that she can fulfil her potential on one of the grandest stages in amateur golf.
“My dad is coming for all of it and my mum is going to come for the last two days and she hasn’t seen me play golf in a while so that will be really nice to see her,” she said.

Completing the Irish trio is two-time Irish Women’s Close Champion, Paula Grant. The experienced Lisburn amateur stepped firmly into the international frame when she finished as leading qualifier at the 2017 Ladies British Open Amateur Championship in Pyle & Kenfig, bowing out to eventual winner Leona Maguire in the quarter-final.

Since that breakthrough, top-10 finishes at the South American Amateur, Welsh Ladies Open Stroke Play and the Irish Women’s Open Stroke Play this year secured Grant a spot on both the Patsy Hankins Trophy European Team and the GB&I Curtis Cup team to take on the USA at Quaker Ridge.

And because of all that, Grant has skyrocketed through the world rankings. At the beginning of 2017 she was barely inside the top-1000 in the world but 18 months later she sits comfortably inside the top-100 and is looking forward to the challenge ahead this week hoping her experience playing for her country pays off.
“Playing for Ireland is just the best feeling,” admitted Grant. “I love playing for my country and it just adds a little bit of something extra to the week, especially when it’s in Ireland as well. It’s just a huge honour to play for lreland and I’m really looking forward to getting started.”

Ireland team captain, Danielle McVeigh, who played on the Irish team at the World Championships in 2008 and 2010 was also in a confident mood ahead of the team’s opening practice round on Monday morning.
Ireland are scheduled to tee it up with defending champions South Korea in the opening round on Wednesday morning and McVeigh has her team firmly focused on the job at hand ahead of a much anticipated start.

“We play with South Korea the first two rounds and they are obviously the best in the world so it’s incredible that we peg ourselves with them, but again we’re very much focusing on our game,” insisted McVeigh.

“It’s good to see where we’re at but they might win or they might not play well. If we just test ourselves just against who we’re playing with, it might be no use either. It’s cool to see but let’s get on with it and hit our own shots.”

When asked is there any reason that the Irish girls wouldn’t contend for a medal this week, McVeigh was short and to the point.
“No reason at all, that’s why we’re here,” she announced.
The battle for medals begins when the first shots are struck on Wednesday morning.

Spectator entry is free to all so come along to Carton House and get behind the ladies and make home advantage count.