Robbie Cannon rolled back the years with a vintage display of ball striking to win the AIG Irish Close at The European Club.
The 39-year-old Dubliner clinched his third major championship in convincing fashion, closing out a 2&1 victory over Eoin Leonard (Killiney/Wentworth) with a regulation par at the 17th.

“I had a funny feeling about this week,” said Cannon. “I even wrote down in my diary last night that I was going to win. I just had a really good feeling.”

And yet it was looking grim for Cannon in his semi-final clash with Alex Gleeson. Two down with five to play, he had to conjure something special to keep his title hopes alive.

“I was up against it against Alex this morning. I was looking like I was going to go three down only I held a bunker shot for a half and when I holed that I knew the title was going to be mine,” said the champion. “I felt like it was destiny.”

Cannon’s tee shot had plugged in the greenside bunker at 14 and after his first attempt stayed in the sand, he sank his next shot for par and escaped with a half. There was no Houdini act required at 15, which was won with a par, and then he birdied 16 from eight feet to draw all square. Cannon took the lead down the last after Gleeson lost his drive on 17 and then closed out the match with a 4-iron to 10 feet. Gleeson’s approach came up short and splashed in the water.

“It’s funny I had nothing but bad luck in every tournament I played this year,” said Cannon. “I knew I was due a bit of good luck this week.”

His biggest break came in the final. After a three-putt cost him the fifth, the first hole that was won in the decider, Cannon’s ball finished under a bush right of the sixth green. As Cannon’s stance was impeded by a path, he was entitled to take relief and a free drop gave him a clear shot to the green. Still, he required an exquisite touch to rescue a par.

“That was a great up and down on the par-three,” Leonard acknowledged. “He holed the putts, which was the key thing.”

On the seventh, which is index one at The European Club, Cannon flushed a 6-iron from 198 yards and capitalised with a birdie from 15 feet. Now ahead, Cannon stayed in the clear.

“I knew if I stuck in there, I might be able to come back but unfortunately he just held me at bay,” said Leonard, who did have chances to win eight and nine but failed to convert from 18 and 12 feet.

The 10th proved another key hole for Cannon. Bunkered off the tee, his second shot hit a sleeper and left him scrambling for par from 150 yards. From there he hit a pitching wedge to 10 feet and holed out to double his advantage.
“I gotta thank Nigel Howley, the pro in Balbriggan, he’s done a lot of work with me on my putting the last couple of years,” said Cannon. “He’s turned me from a poor putter into a good putter. I got some really good putts there 6, 7 and 8 that were crucial.”

Although Cannon lost 11 to par, he won 14 with a conceded birdie. He continued his march to the title with a winning par at 15 and although he missed an eight-footer for the match on 16, he made a regulation par on 17 to secure his third championship crown.

Coupled with his win at the Irish Amateur Open in 2013, Cannon has now completed a distinguished double by adding the Close to his collection – a feat last achieved by Padraig Harrington in 1995. Together with the South of Ireland Championship he captured at Lahinch in 2009, Cannon has now won three of the six domestic majors.

“Two good friends of mine, Seamus Duffy – he used to coach me – and Matt McAlpin – they call it the Cannon Slam,” said the new champion. “I’m halfway to winning all six. It’s definitely a realistic ambition now. Before today it was probably slim but I think I’m there with a fighting chance now. I think that’s something for me to aim for, for the rest of my career.” 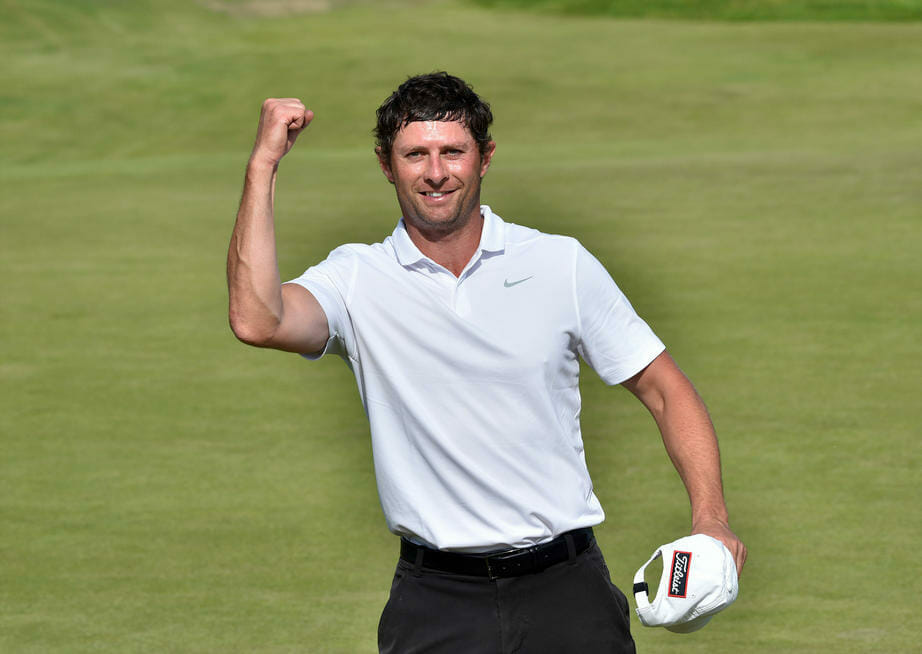 A return to the Ireland team for the Home Internationals in September may also be on the cards for the Balbriggan star.

“To be honest, 2013 when I won the Irish Amateur and I didn’t get picked [for Ireland], that was probably the hardest pill I’ve ever had to swallow,” said Cannon. “I was gutted because I’m such a passionate Irish man and it would mean the world to play for Ireland again. Hopefully, that should be good enough.”

Beaten finalist Leonard, who beat Portmarnock’s Conor Purcell in the semis, flies to Pebble Beach on Friday for the US Amateur and he will bring plenty of good memories with him.
“I came here to enjoy the course and see how far I could get,” said the 21-year-old Yale student, who is a member of both Killiney and Wentworth. “It’s been a great experience.”